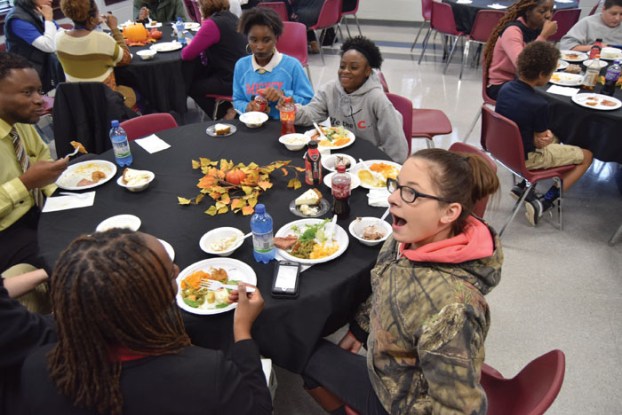 Middle school students from Henderson were treated to a Thanksgiving meal by staff at the East Rowan YMCA. The school this year formed a partnership with the YMCA, allowing students to take P.E. there twice a week. Rebecca Rider/Salisbury Post

A buffet-style lunch was set up in the lobby of the YMCA. Staff members served students food before both sat together around tables covered in dark cloth and autumn decorations.

Students have been trekking down to the eastern branch of the YMCA twice a week all school year. There, they have P.E. classes and are mentored by the staff.

“They didn’t have a space for that,” said Amanda Hesse of the YMCA.

Principal Arlisa Armond contacted Hesse over the summer and brought up the possibility of a partnership. Hesse and other YMCA staff members were immediately on board.

“Through our conversations, it just kind of grew,” she said.

Henderson offers an alternative learning environment for students who have been unsuccessful in traditional public schools.

The partnership may be new, but Armond said it’s already been a positive for students.

“We’ve seen a definite transformation in our students,” she said.

Students respectful to the staff and carry a sense of pride and worth back with them to the school, she said.

Hesse said the success is through the care and mentoring of the YMCA staff members.

“We realized that offering mentorship through our relationship was just as important — if not more so — than physical education,” she said.

In order to cement that relationship, YMCA Director Sarah Zander suggested hosting a lunch for students.

“’You know we need to have a lunch for our — she calls them ‘our babies at Henderson,’” Hesse recalled Zander saying.

With the holiday season drawing close, November was the perfect time to surprise students and let them know that they are a part of the YMCA family.

The meal was supposed to be a surprise, Armond said, but the news slipped out. But students were still touched by the meals.

“’Wow, they’re doing this for us?’” Armond said students asked. “They felt special.”

Student Sha’Michael Connor said she was surprised by the meal.

“We feel cared about,” she said of herself and her fellow students.

She also has enjoyed the twice-weekly P.E. lessons.

“I think it’s good,” she said. “I like coming here. It helps us to connect with more people than just at school.”

In January, Armond hopes to hold P.E. classes for high school students, and the school also hopes to work with the YMCA throughout the year to offer several internship opportunities.

“This is just the beginning,” Armond said. “We’re so excited.”

Cheerwine punch returns to store shelves for the holidays

Southerners might put up their Christmas trees the day after Thanksgiving, but for some, the holiday season starts when Cheerwine... read more