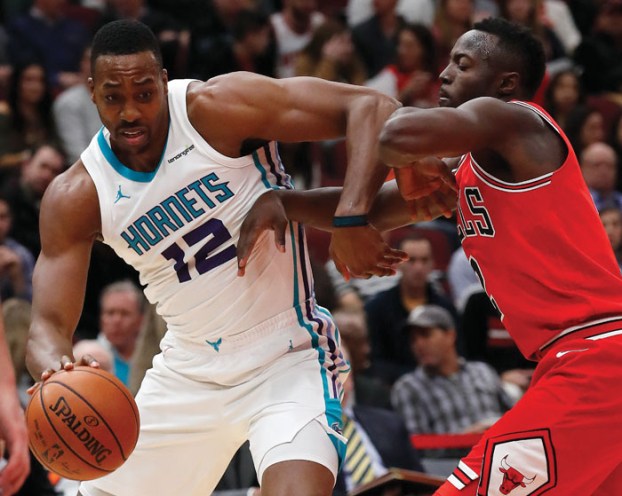 Charlotte Hornets’ Kemba Walker, right, goes to the basket against Chicago Bulls’ Cristiano Felicio during the first half of an NBA basketball game Friday, Nov. 17, 2017, in Chicago. (AP Photo/Jim Young)

Walker finished five points shy of his career high but missed a driving layup with Charlotte trailing by one in the closing seconds.

Last in the NBA in scoring and field goal percentage, Chicago shot 52 percent and hit 17 of 34 3-pointers.

Holiday and Denzel Valentine, who had 18 points, each sank four from long range. Kris Dunn scored 22, Markkanen added 16 and the Bulls came out on top after a tense finish.

Charlotte’s Michael Kidd-Gilchrist rebounded a missed shot by Chicago’s Robin Lopez with about 10 seconds left. After a timeout, a driving Walker was bothered by a rotating Markkanen as Walker tried to put the Hornets ahead.

Call that a super response from Superman.

Dwight Howard had an emphatic answer in the first quarter when a fan near the baseline yelled, “Dwight Howard, you (stink)!” He dunked, turned and winked at the guy.

Hornets: Nicolas Batum had nine points in 27 minutes after scoring 16 over 32 minutes in his season debut against Cleveland on Wednesday night. Batum missed the first 13 games because of a torn ligament in his left elbow. Charlotte coach Steve Clifford wanted to hold Batum to about 28 minutes in this one after he carried a heavier load than anticipated against the Cavaliers.

Bulls: Coach Fred Hoiberg on Houston scoring 90 points in the first half against Phoenix on Thursday: “I’d pray to get 90 in a game.” … C David Nwaba (sprained right ankle) missed his fifth consecutive game. He participated in the shootaround and the Bulls hope to have him practice on Saturday.

Danica to end racing career at next year’s Indy 500

By Jenna Fryer AP Auto Racing Writer HOMESTEAD, Fla. (AP) — She started in go-karts when she was 10, and... read more