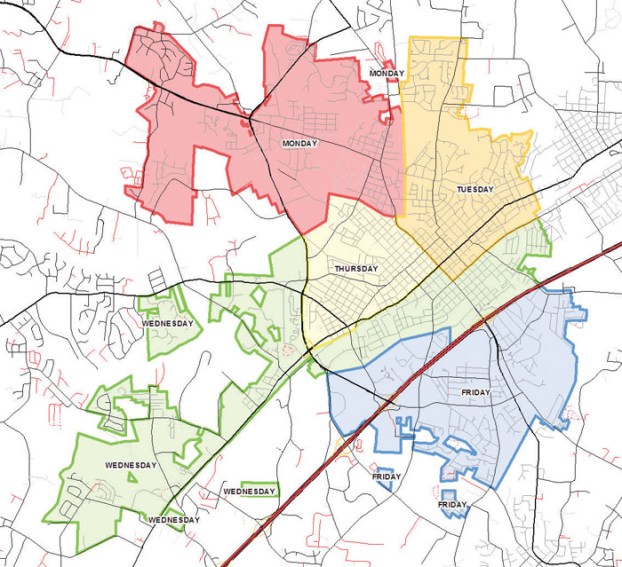 Route changes will allow for more efficient collection points, while keeping the trucks in the same general area each day, thereby reducing the number of miles driven per week, city officials said.

Updated recycling calendars will be distributed over the next few weeks and posted on the city website, salisburync.gov.

In addition to the route changes, the city will change its policy on collection of “bulky” items, effective July 1.

Previously, items that are considered “bulky” were collected throughout the year at no charge. These items include extra trash or large items placed outside a city-issued roll-out container.

Under the change, residents will have to schedule bulky items for collection. The fees for removal will not change and are listed below.

During the Spring and Fall Spruce Up periods, bulky items will continue to be collected at no charge and without scheduling.

The new standards for collection of rollouts, bulky items and yard waste are:
•    Items left outside city-issued rollout containers will be considered bulky.
•    Bulky items can be collected by calling 704-638-5260 to schedule an appointment.
•    The city will still provide a collection of bulky items during Spring Spruce Up and Fall Spruce Up periods.

•    Limits to yard waste collection will be one truckload per week.

The bulky item collection fees are as follows:
Minimum charge, $10.

Items requiring use of backhoe, $50

Bulk brush removal, $50 minimum (applies to loads over a truckload)

Charges for specific cases will be calculated by Public Services based on a site visit.

All fees must be paid in advance of the service.

Residents will receive notifications on their rollout carts over the next few months about the new garbage collection schedule, as well as by the Nixle notification system, updates on the city’s social media platforms and Nextdoor.com.

The new waste collection route map is at www.salisburync.gov/garbage.

SALISBURY — The Rowan-Salisbury Board of Education dusted off an old conversation Monday: What to do about 35 aging schools... read more