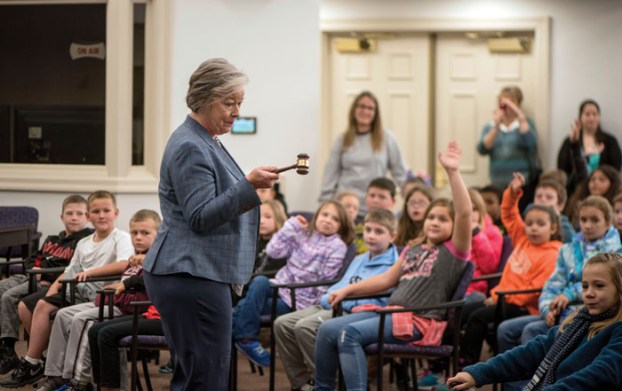 Salisbury City Mayor Pro Tem Maggie Blackwell has always enjoyed talking with students about the workings of government. On Wednesday she talked city government for the last time before a group of third-graders from Faith Elementary School. Jon C. Lakey/Salisbury Post

SALISBURY — Every year for the past six years, Mayor Pro Tem Maggie Blackwell has used birthday cake as an example to explain city budgets to third-graders.

“Now if I were to say next Tuesday at council, ‘Mayor Alexander, I have a motion. I would like to move that we spend $1,000 on birthday cake for all of the third-graders in Rowan County’… would that be a good use of the tax dollars that your parents worked hard to earn?” Blackwell asked nearly 100 Faith Elementary School third-graders Wednesday.

The students, who sat in rows of chairs in the City Council Chambers, said “no,” in unison.

Ready for their response, Blackwell asked, “Who can tell me why not?”

A third-grader named Taylor raised her hand and said, “It’s not important because we need to pay taxes for important stuff.”

Blackwell high-fived the girl and said she was right.

“You have to divide things into two categories: wants and needs,” Blackwell said.

She and the third-graders then agreed that, on most days, birthday cake falls into the “wants” category.

“But today, it’s a need,” Blackwell said, just before asking one of the students’ teachers to cut into the birthday cake sitting behind her.

The Faith Elementary class that Blackwell spoke to at 9:45 a.m. Wednesday was the last class of third-graders that she will speak to as Salisbury’s mayor pro tem.

Blackwell has served four terms on the City Council and decided not to run for re-election this year.

In celebration of her last third-grade presentation at City Hall, Blackwell decided to finally bring the birthday cake that she’d been talking about for years.

“And just a word of clarification: I paid for the cake. It is not tax dollars,” Blackwell said.

Third-grade classes from all Rowan County schools come to downtown Salisbury for an annual field trip to City Hall, Rowan Museum, the courthouse and the library.

After the last of the third-graders left City Hall, Blackwell said that talking with the kids was one of the two things that she will miss most about being on the City Council.

“And people don’t realize this, but oftentimes citizens who are down on their luck and have no one to call, they call a council member. And I’ve got 50 stories,” Blackwell said.

She mentioned a woman whose car was repossessed by unethical lenders, a woman who could not sit on her front porch because pit bulls were loose in her neighborhood and a woman whose husband’s gravestone had been installed backward.

“I mean, I’ve got a thousand of those stories,” Blackwell said. “… It’s so intimate to be trusted with someone’s private details, and the trust that they give you is such an honor. It by far beats any moment you have sitting up here voting yes or no.”

Blackwell said that once her City Council duties are behind her next Tuedsay, she will help her husband, Jody, with his restoration of a church on Ridge Avenue, spend time with her grandchildren and “take a walk every day at 7 o’clock.”

SALISBURY — For nearly 60 years, volunteers have worked to make the Holiday Caravan Parade a joyful experience for the... read more