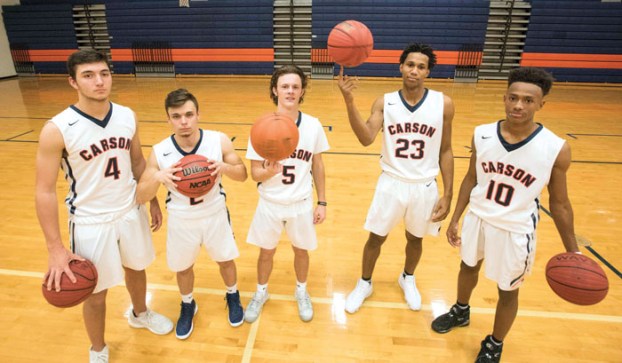 CHINA GROVE — Always patient, always positive, Carson boys coach Brian Perry paid serious dues in Carson’s formative years, but the Cougars have been tough for a while and they should be contenders for championships this season.

“We’re as experienced and as solid as we’ve been in a long time,” Perry said. “We’ve got one of the best senior groups we’ve ever had. We have three returning all-county guys (first teamer Jamarius Hairston and second team picks Jailen Williams and Owen White), and I don’t know that we’ve ever been in that situation before. Our senior leadership is excellent. We have a ton of potential.”

This may be the perfect storm for the Cougars. Not only does Carson have a battle-tested, talented team, it is moving to a lesser 3A league. That’s not to demean the North Piedmont Conference in any way, but every 3A boys basketball league in the state is a lesser league compared to the old South Piedmont Conference. The SPC produced the last two state champions in Robinson and Cox Mill, and while Carson had a good team, it had to fight like crazy to go 11-7 in the SPC a year ago. Carson has been competing against ACC-level players.

If Carson made a turnover against Robinson, Lavar Batts Jr. was dunking the ball, and if Carson had a defensive breakdown against Cox Mill, Wendell Moore Jr. was banking in two more points. There will be a greater margin of error for the Cougars in the NPC, although Perry is careful to say all the right things about Carson’s downsized, six-team league.

“Statesville will be good, South Iredell will be good, East Rowan is big, and West Rowan still has Caleb Mauldin,” Perry said. “People are feeling relieved that we’re out of that monster league we were in, but we’re still in a very competitive league.We should be contenders, but it’s not like we won’t have to scrap for everything we get. None of our conference games will be easy.”

Carson played short-handed in 2016-17 due to defections, injuries and academic ineligibility. Carson usually had only seven or eight in uniform, but the Cougars will have the standard 12 this time.

“It’s been good to have 12 guys at practice,” Perry said. “There were times last year, especially when we lost (Cameron) Prugh for a while, that we were just hanging on for dear life.  Our depth will be a lot better.”

The key graduate for the Cougars was Brenden Westbrook,  now a Catawba College defensive back. Westbrook’s flying jams energized the Cougars, and they’ll also miss his consistent rebounding.

Hairston, a 6-foot-4 forward, is a slashing, long-limbed scorer who is a better shooter than he gets credit for. He averaged 19.2 points per game as a junior. A four-year varsity player, he entered his senior season with 1,064 career points and is likely to become only the second player in program history to reach 1,500. Assistant coach Darius Moose is Carson’s all-time scoring leader with 1,768 points.

Hairston enjoyed a stellar football season as a wide receiver. He’s a stronger, more mature player than he was in his early years.

Also more mature physically is 6-3  forward Owen White, who scored 11.6 points per game last season. White is best-known as one of the nation’s top prep baseball pitchers, but he’s also a talented basketball player. The reigning Rowan County Athlete of the Year, he’s a vigorous rebounder and a dead-eye 3-point shooter.

Williams, a 6-foot floor general, averaged 12.7 points and does a lot of things. He runs the offense, using his quickness to drive-and-kick. He can finish at the rim and he earns — and makes — a lot of free throws.

“He’s grown a couple of inches, he’s all over the rim for rebounds, and he’s quick as lightning,” Perry said. “He had a great summer.”

Cole Perry, a junior who is the coach’s nephew, has been on the varsity since he was a freshman. He made strides as a sophomore when he averaged 7.4 points per game. He’ll make more strides this season after growing 4 inches to 6-2. He can shoot and dunks easily. His added size should make him more of a factor on the glass and on drives.

Prugh, a 6-foot senior, is an athletic guy. He’s a serious 3-point threat, but he also can attack the rim to draw fouls. He averaged 9.0 points per game.

If you add up the career highs for Carson’s five starters — ranging from Hairston’s 33 to Perry’s 18 — it’s 126 points. This team has serious firepower. In a win early this season against Concord, Hairston, White and Williams all topped 20 points, the first time in school history Carson had three 20-point scorers in the same game.

Carson has some depth at guard where Cole Sifford and Cole Hales — yes, this team has three guys named Cole — have experience. Sifford, the football team’s quarterback, will provide defense, intensity and ball movement. Hales is a dangerous shooter.

The rest of the bench is new, but those Cougars will provide minutes, rest and rebounds. D.J. Dunn, a 6-2 senior, has shown a nice touch inside. Junior Deacon Wike, the 6-2  brother of former East Rowan star and current University of Richmond starter Karleigh Wike, has potential. Sophomore A.J. Jackson is a good rebounder. Sophomore Denis Zuniga and junior Jarius Bates offer quickness.

Carson’s boys have never won a league championship. The program’s best  finish was second place in the NPC in 2010 with a school-record 21-6 mark. Carson also has never won a Christmas tourney championship, although the Cougars made it to the finals in 2013 and again last season.

There’s a lot to shoot for. This is a team capable of reaching lofty goals.

“We’re looking forward to it,” Perry said. “Our county is going to be good. It should be an exciting year.”

Jamarius Hairston, 6-4  Sr. — Scores in bunches and in a lot of different ways. Will be in the hunt for player of the year honors and a sure college player.

Jailen Williams, 6-0 Sr. — Runs the show for the Cougars and he can put the ball in the hole. The brother of former Carson star Tre Williams, he’s getting close to 600 career points.

Owen White, 6-3 Sr. — After taking the football season off, White, a South Carolina signee and a potential first-round baseball draft pick in June, is excited about competing on the court. He’s already turned in a 29-point outing.