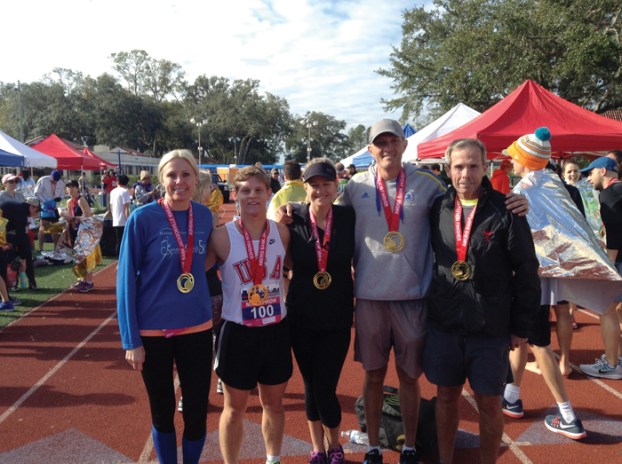 Special memories made in Jacksonville

My first marathon was in New York City in 1980 and I made a mess of it. My second marathon, about six weeks later, was in Jacksonville, Florida. I ran a total of four fast marathons (26.2 miles) there and enjoyed every one. There are enough memories in Jacksonville to fill several columns, but today I want to focus on new memories.

About four months ago, Chance Brown decided he wanted to run a marathon. Chance and I go back about 11 years. He showed up for a triathlon camp that I was teaching at the East Rowan YMCA and on the first day, I threatened to kick him out of the class for talking too much. Chance learned to be a good listener and runner with some great finishes in East Rowan cross country and local road races.

Stuart Perkins and I used to work together and I often talked with him about running. He eventually put considerable effort into his training and kept getting better. He had goals and wanted to achieve them. I hope that our discussions had something to do with Stuart becoming the runner he is.

My daughter, Amber, decided a couple of weeks ago that she wanted to run a half marathon. She had been an off and on runner since South Rowan High School cross country. Problem was that her most recent long run was just five miles, usually not nearly enough to keep going for 13.1. Amber told me that she was thinking about going to Jacksonville to do the race and I had already considered going to see Chance finish. I didn’t know that Stuart and his wife, Kim, were going too.

I decided to run the half marathon with Amber, hoping to help her cover the distance. My own long run recently of just 11 miles seemed good enough. The girl just has some special ability to do big things demonstrated by her sprint to the finish in 2:09:32.

Chance followed the training schedule that I gave him and with his mom and several friends on hand, completed the marathon distance in 3:24:58. Chance said, “No matter how you divide up those last 13 miles, it is still longer than you want it to be. From a runner’s point of view, running 26.2 puts the word “marathon” in perspective. It is something your brain isn’t accustomed to staying with for that long. It means I have overcome one of the most difficult mental struggles which has ultimately strengthened my promise of doing it again.”

Stuart realized a long-time goal of joining a small Rowan County club of sub-3 hour marathoners. He said, “The morning began at 4 a.m. for me as I went through my nutrition plan I had practiced over the past year. We boarded the shuttle bus to the race start and were greeted by some of the wonderful volunteers that helped with the day’s events. The folks in Jacksonville were extremely hospitable and made this experience wonderful. The weather turned out to be ideal for running (40’s-low 50’s). A light breeze was just perfect to cool me off when needed. The course was as flat as described and took runners through beautiful residential neighborhoods with stunning homes. With a specific pace plan to obtain my goals, I also benefitted from following a runner who knew the course as he led us perfectly through the winding turns.” Stuart’s time was 2:59:03. I’ll have more on Stuart’s accomplishment in a few weeks.

Kim Perkins, Stuart’s wife, also finished the half marathon. She said, “Rough day for me in my fifth half marathon. I got nauseous and threw up at mile 7. Even though all the runners started together (5k, half and full marathon), congestion spread out quickly and wasn’t an issue for me. The course was flat and I really enjoyed everything about the city of Jacksonville.” Kim did her half in 2:12:30.

I had decided at the last minute, actually late on Thursday before the Saturday morning race, to head to Jacksonville. What followed was a whole group of new memories with some of my favorite people at a place that I already considered full of running magic. Not much is better than running every step of a long race with your daughter and then following that with seeing close friends achieve their own goals. There was plenty to think about as I drove home with Christmas music in the background.

On New Year’s Day, The Resolution Run 5K is set for The Forum at 9am. It is a simple low key 5K to start 2018 off right with plenty of reasons to participate. Entry is just $10, or $5 with a minimum of three canned goods. Participants get refreshments, a dri-fit shirt and an accurate time. All proceeds and canned goods go to Rowan Helping Ministries. Registration is available at the Forum. More info is available at www.salisburyrowanrunners.org