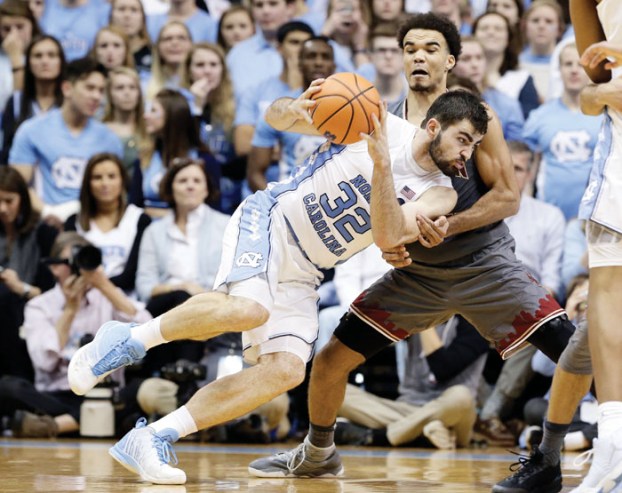 Rebound. Defend. And he’ll stick with it.

Luke Maye had career highs of 32 points and 18 rebounds while North Carolina’s small unit got off to a fast start in a 96-66 win against Boston College on Tuesday night, snapping a two-game skid.

Williams juggled his starting lineup to move in Cameron Johnson over freshman forward Garrison Brooks. That perimeter-heavy unit — Johnson, point guard Joel Berry II, and wings Kenny Williams III and Theo Pinson alongside the 6-foot-8 inside-out threat in Maye — responded by getting out in transition and on the attack in their active opening minutes.

“We got beat twice in a row and we weren’t playing well,” said Williams, who typically prefers a two-post offense. “So I decided to do something. I may go back big next time, who knows?”

On Tuesday night, at least, it provided the Tar Heels (13-4, 2-2) with a needed jolt. UNC ran off an early 12-0 burst, then relentlessly attacked the boards to address one of Williams’ primary concerns with going small for long stretches.

“The past couple of games, I’ve kind of gotten down on myself and I haven’t been the same position,” Maye said, adding: “I kept telling myself, ‘Just continue to work hard and work to get in the right spot,’ and my teammates found me. The basket was pretty big tonight. It was really fun.”

The school said Maye is the first UNC player with at least 30 points and 15 rebounds at home since national player of the year Antawn Jamison in 1997-98.

Ky Bowman scored 21 points to lead Boston College (11-6, 2-3), who had been outrebounded just three times all season. But the Tar Heels finished with a 58-23 rebounding advantage and had 24 second-chance points.

“They came out hitting us first,” said Jerome Robinson, who had 15 points for BC. “You knew that was going to happen with them dropping those two losses. They were going to come out as hard as they could and try to get it going those first three minutes right away. That’s definitely what happened.”

Boston College: The Eagles have proven they’re capable of big shooting days, most notably by making 15 of 26 3-pointers to upset then-No. 1 Duke in December. But they got off to a 2-for-13 start, then struggled to grab any early rebounds. UNC grabbed 16 of the game’s first 18 rebounds, putting BC in a quick hole that its periodic bouts of warmed-up shooting couldn’t erase.

“It’s got nothing to do with offense; we gave up 96 points,” BC coach Jim Christian said.

UNC: The Tar Heels lost on the road to two ranked league opponents last week, most notably when they struggled to find any daylight against No. 3 Virginia’s enveloping defense in a 61-49 loss. Things came much easier this time.

It was the first 30-point game by a UNC player at the Smith Center since Tyler Zeller did it against Maryland during the 2011-12 season. It was also the most points at home for a Tar Heel since Wayne Ellington had 34 against Maryland in February 2009.

Johnson, a Pittsburgh graduate transfer, finished with 14 points and 11 rebounds in his first start for the Tar Heels.

Boston College: The Eagles step out of league play to host Dartmouth on Saturday.