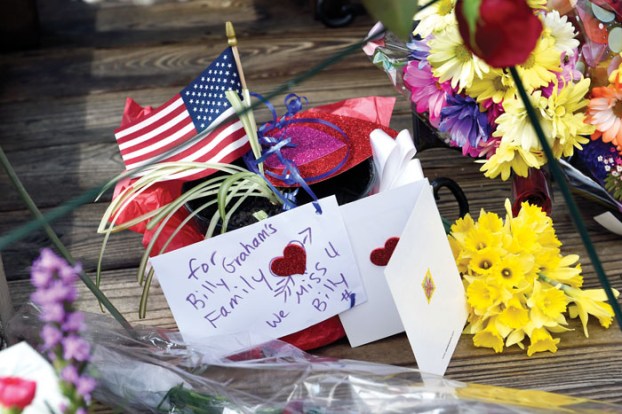 Flowers and notes are left outside Chatlos Chapel in tribute to Rev. Billy Graham at the Billy Graham Training Center, Thursday, Feb. 22, 2018 in Asheville, NC. Graham’s body will lie in honor in the U.S. Capitol Rotunda next week, the first time a private citizen has been accorded such recognition since civil rights hero Rosa Parks in 2005. The two-day viewing in Washington on Feb. 28 and March 1 will be part of nine days of mourning for postwar America’s most famous evangelist, who died Wednesday at his home in North Carolina’s mountains at age 99. (AP Photo/Kathy Kmonicek)

For Billy Graham and North Carolina, the affection was mutual

MONTREAT — While the Rev. Billy Graham’s travels took him as far away as the Soviet Union and China, he always came back to his native North Carolina, a place of refuge, reflection and spiritual refueling.

In the process, the most famous evangelist in American history became one of North Carolina’s favorite sons.

The highway that runs past the world headquarters of his evangelical empire in Charlotte is called Billy Graham Parkway.

The chapel in the quiet mountain town of Montreat where he was married in 1943 is named in his honor.

And a 2011 poll found him to be the most revered person in the state, beating out TV star Andy Griffith and University of North Carolina basketball coach Dean Smith.

Graham, who died Wednesday at 99 and will be buried at his library in Charlotte next Friday, spent the final years of his life at his secluded home in Montreat, about 100 miles to the west, where, as he did even in his heyday, he worked on his sermons or quietly dropped in on local church services almost unnoticed.

To the end, his family said, he saw his North Carolina heritage as an essential part of who he was.

“My father was a very humble person. He never saw himself as a celebrity. He always saw himself as a farm boy from Mecklenburg County,” the Rev. Franklin Graham said Thursday on the “Today” show.

North Carolina was the site of the beginning and the end of Graham’s earthly life, bookending trips to scores of countries to preach the Gospel.

Born on Nov. 7, 1918, Graham grew up on a Charlotte dairy farm that is now the site of office buildings. It was in Charlotte in 1934 that a 16-year-old Graham committed himself to Jesus at a traveling revival.

Over the years, he would return periodically for crusades, including one in 1996 before a packed crowd at the city’s football stadium.

On the road, “he’d be preaching in some city or place, and he always liked to say that if he had to live somewhere else, it would be there, but, ‘My home is in North Carolina,’” recalled Cliff Barrows, Graham’s longtime music director, who died in 2016.

“His heart is in North Carolina.” Graham broke ground in Charlotte on the headquarters for his Billy Graham Evangelistic Association in 2002, moving it from Minnesota, where he had once worked as a college administrator.

It was Montreat, though, that was his home base, where he raised his five children, where his wife’s family had roots, and where the two were married in what is now Graham Chapel at Montreat College.

“This was a refuge for Billy. It was a place where he could rest and recuperate between his international travels. You can just imagine the demands on his life,” college President Paul Maurer said.

Around Montreat, resident Brad Hestir said, Graham would sometimes slip into a church service to participate as a worshipper without drawing attention to himself.

“You would occasionally at the end of a church service realize he was here in the balcony,” Hestir said.

“The man was private for the last several decades, and the whole town was organized around protecting that privacy,” said Hestir’s wife, Jean Norris.

After his death, video billboards along North Carolina interstates paid their respects with messages such as one showing Graham’s name against a heavenly blue sky, with a white dove.

Charlotte historian Tom Hanchett said it was fitting that the city chose Graham’s name in the 1980s for the expressway that serves as a main route to the airport.

“There is no better symbol for a city on the move, a city on the make, a city flying to a new place. And the journey there comes from the roots of this place, and Billy Graham is a powerful, real part of those roots,” Hanchett said.