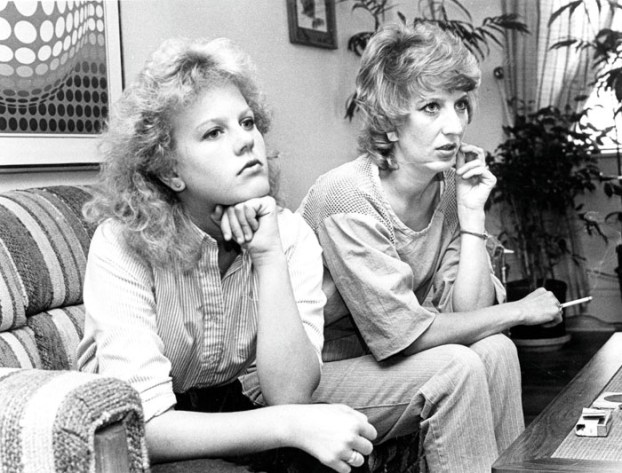 Jodie Trexler, left, is seen in this 1985 photo with her mother, Vickie Monroe Oakes, during an interview with the Salisbury Post about the death of her sister, Reesa Dawn Trexler, who was stabbed to death in 1984. File photo

Will the Reesa Trexler murder be solved?

SALISBURY — “Why is the Trexler murder still unsolved?” read a headline from a 1988 letter to the editor from a woman who wanted to know what many in the community have longed to know for 34 years.

On June 15, 1984, Reesa Dawn Trexler, 15, was found stabbed to death at her grandparents’ home at 714 N. Shaver St. Her grandfather, Walter “Walt” Monroe, discovered her bloodied, naked body lying in a front bedroom of the house. She’d been stabbed repeatedly in the neck and upper chest.

The Shaver Street home was not far from her family’s home at the corner of Bringle Ferry Road and Shaver Street. She’d been by herself in the home for four hours by herself.

Walt Monroe had been to the grocery store and his wife to the hairdresser. There was no forced entry into the home and the family said nothing had been taken. In fact, the teen still wore a bracelet, watch and a ring on her finger.

No weapon was ever found and the blade of a steak knife was found during the autopsy embedded in Trexler’s right shoulder.

Reesa Trexler was the niece of Richard Monroe, owner of Richard’s Barbecue and the granddaughter of Walt Monroe and James P. “Pinky” Trexler, whose hot dogs have been a hit at Legion ball games for decades. Richard Monroe declined to comment.

Some family members, including Jodie Trexler, the then 13-year-old sister, have long been thought by many as the killer. Others claimed Walt Monroe killed his granddaughter.

An FBI suspect profile was released by investigators saying the killer was likely a white male between 18 and 24, who knew Trexler, but not personally. The suspect would have had emotional problems at the time of the killing and would’ve sought additional outlets for his guilt.

Investigators hoped that by releasing a killer profile they could “shake something loose.”

No arrest has ever been made.

Throughout the years, various Salisbury Police detectives were assigned to the case, but year after year it remained unsolved. Salisbury Police Detective Travis Shulenburger has recently been reviewing the files and looking into the decades-old murder.

On Monday, Jodie Trexler Laird will be featured on the Dr. Phil Show, in an episode titled — Cold Case: “I Didn’t Murder My 15-year-old Sister! The False Accusations And Small Town Gossip Haunt Me.”

Laird, who emailed the show, said she wanted to prove her innocence. She even took a polygraph test, according to a show preview. She’ll talk about the stigma of being thought to be her sister’s killer and how Reesa’s death still haunts her today. Laird declined any comments for this story until after the airing of Monday’s show. The show will air at 4 p.m. on WSOC.

Reesa Trexler’s best friend Beth Davis, then Beth Hendrix, was interviewed for the show, but said she could not discuss the details until after the show airs.

The day after the murder, Beth spoke with the Post about how her friend had wanted to attend college, was interested in psychology, loved children and was a fairly good student.

Beth said in 1984 that Trexler always made her laugh.

Walt Monroe criticized the police about five months after the murder saying they didn’t have enough people investigating. He said there were good investigators working on the case, but that it wasn’t something that could be done by one man. Others criticized law enforcement for dragging their feet and not devoting enough time to the investigation.

Rewards in the case, even from then Gov. Jim Hunt’s office, yielded no new results.

Anyone with information about the Reesa Trexler murder can contact Salisbury Police Detective Travis Shulenburger at 704-638-5333 or Salisbury-Rowan Crime Stoppers at 1-866-639-5245.

Staff report SALISBURY — The Salisbury Symphony Orchestra may be about to make history, country-style. On May 5, the symphony... read more