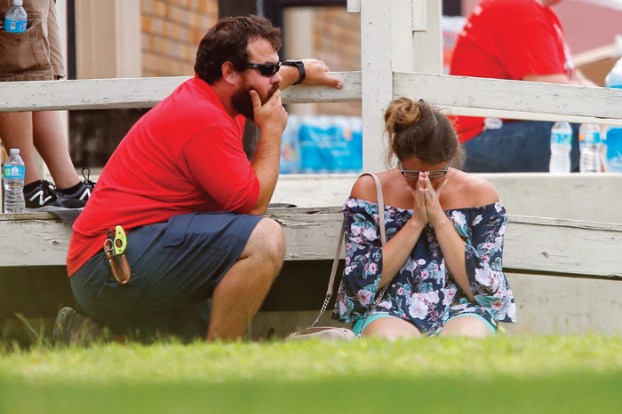 A woman prays in the grass outside the Alamo Gym where parents wait to reunite with their kids following a shooting at Santa Fe High School Friday, May 18, 2018, in Santa Fe, Texas. (Michael Ciaglo/Houston Chronicle via AP)

By Juan A. Lozano

SANTA FE, Texas — A 17-year-old armed with a shotgun and a pistol opened fire at a Houston area high school Friday, killing 10 people, most of them students, authorities said.

It was the nation’s deadliest such attack since the massacre in Florida that gave rise to a campaign by teens for gun control.

The suspected shooter, who was in custody on murder charges, also had explosive devices that were found in the school and nearby, said Texas Gov. Greg Abbott, who called the assault “one of the most heinous attacks that we’ve ever seen in the history of Texas schools.”

Investigators offered no immediate motive for the shooting. The governor said the assailant intended to kill himself but gave up and told police that he did not have the courage to take his own life.

The deaths were all but certain to reignite the national debate over gun regulations, coming just three months after the Parkland, Florida, attack that killed 17 people at Marjory Stoneman Douglas High School.

Another 10 people were wounded at the school in Santa Fe, a city of about 13,000 people roughly 30 miles southeast of Houston, the governor said. The wounded included a school police officer who was the first to confront the suspect and got shot in the arm.

Hospitals reported treating a total of 14 people for injuries related to the shooting.

Michael Farina, 17, said he was on the other side of campus when the shooting began. He heard a fire alarm and thought it was a drill. He was holding a door open for special education students in wheelchairs when a principal came bounding down the hall and telling everyone to run. Another teacher yelled out, “It is real!”

Students were led to take cover behind a car shop across the street from the school. Some still did not feel safe and began jumping the fence behind the shop to run even farther away, Farina said.

“I debated doing that myself,” he said.

The gunman yelled “Surprise” before he started shooting, according to Texas Rep. Michael McCaul, chairman of the House Homeland Security Committee.

The suspect was identified as Dimitrios Pagourtzis, who appeared to have no prior arrests or confrontations with law enforcement. A woman who answered the phone at a number associated with the Pagourtzis family declined to speak with the AP.

“Give us our time right now, thank you,” she said.

Pagourtzis made his initial court appearance Friday evening by video link from the Galveston County Jail. A judge denied bond and took his application for a court-appointed attorney.

Pagourtzis played on the junior varsity football team and was a member of a dance squad with a local Greek Orthodox church. Acquaintances described him as quiet and unassuming, an avid video game player who routinely wore a black trench coat and black boots to class.

The suspect obtained the shotgun and a .38-caliber handgun from his father, who owned them legally, Abbott said. It was not clear whether the father knew his son had taken them.

The assailant’s homemade explosives included pipe bombs, at least one Molotov cocktail and pressure-cooker bombs similar to those used in the Boston Marathon attack, authorities said.

“My heart is so heavy for the students of Santa Fe High School. It’s an all too familiar feeling no one should have to experience. I am so sorry this epidemic touched your town — Parkland will stand with you now and forever,” Marjory Stoneman Douglas student Jaclyn Corin said in a tweet.

She also directed her frustration at President Donald Trump, writing “Our children are being MURDERED and you’re treating this like a game. This is the 22nd school shooting just this year. DO SOMETHING.”

In Texas, senior Logan Roberds said he was near the school’s art room when he heard the fire alarm and left the building with other students. Once outside, Roberds said, he heard two loud bangs. He initially thought somebody was loudly hitting a trash can. Then came three more bangs.

“That’s when the teachers told us to run,” he said.

At that point, Roberds said, he told himself, “Oh my God, this is not fake. This is actually happening.”

Roberds said more gun- control measures are not needed, citing the need for defense against intruders.

“What are you going to do if some guy comes in your house and points a gun at you? You can’t do nothing with a knife,” he said.

Friday’s assault was the deadliest in Texas since a man with a semi-automatic rifle attacked a rural church late last year, killing more than two dozen people.

There were few prior clues about Pagourtzis’ behavior, unlike the shootings in Parkland and the church in Sutherland Springs, Abbott said, but the teen wrote in journals of wanting to carry out such an attack and then to end his own life.

“This young man planned on doing this for some time. He advertised his intentions but somehow slipped through the cracks,” Cornyn said.

In the aftermath of the Florida assault, survivors pulled all-nighters, petitioned city councils and state lawmakers, and organized protests in a grass-roots movement. Within weeks, state lawmakers adopted changes, including new weapons restrictions.

In late March, the teens spearheaded one of the largest student protest marches since Vietnam in Washington and inspired hundreds of other marches from California to Japan.

The calls for tighter gun controls have barely registered in gun-loving Texas — at least to this point.

Texas has some of the most permissive gun laws in the U.S. and just hosted the NRA’s annual conference earlier this month. In the run-up to the March primary election, gun control was not a main issue with candidates of either party. Republicans did not soften their views on guns, and Democrats campaigned on a range of issues instead of zeroing in on gun violence.

SALISBURY — Meals on Wheels is stepping out from beneath the United Way umbrella. The two organizations sent out a... read more