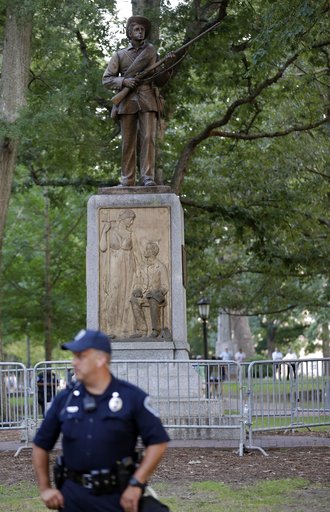 Sam, of course, is the monument to UNC Chapel Hill university students who lost their lives fighting for the Confederate Army during the Civil War.

Since 1913, when it was erected with funds from alumni and the United Daughters of the Confederacy, the statue of a young Confederate soldier has stood at the north end of campus near Franklin Street.

Over the years, Sam became an object of affection, at least among some white students and alumni. It didn’t matter, as some scandalmongers discovered, that sculptor John Wilson had used a Bostonian — indeed, a Yankee! — as the model for Sam. Or that Sam was a virtual copy of a statue of a Union soldier Wilson completed for a Northern town.

Others aren’t so fond. Folks have been calling for the statue’s removal since the early 1960s. Those calls renewed after the white supremacists’ march in Charlottesville, Va., last year. The statue was vandalized in 1968, in 2016 and again earlier this year.

Now comes word from the university’s campus police that security for the statue — posting guards around it, including one around-the-clock, etc., to keep it from being defaced and the area safe — cost some $390,000 last year. That’s not including $3,000 to clean off the blood-red paint that one protester splashed on it.

That’s a lot of money. As some cheeky students pointed out at a recent UNC-Chapel Hill Board of Trustees committee meeting, that $390,000 could have been used to pay half of UNC System President Margaret Spellings’ salary. Or, to pay full tuition for 44 poor undergraduate students.

Given the cost — and regardless of the argument over the statue’s appropriateness — one has to wonder if keeping Sam in place is worth the money and fuss.

We’re not talking about demolishing the statue. But couldn’t it be moved away from its prominent location — essentially, the university’s front door — to a quieter, less controversial spot?

(There is, for example, a lovely antebellum cemetery on the southeastern end of campus, across the road from the old Carmichael Auditorium. Sam would fit in there.)

Moving all that bronze and granite would be expensive, of course, but certainly not as expensive as $390,000 per year for, how long?

Of course, the statue is going nowhere, at least not yet. In a move to protect similar Confederate monuments, the folks in the majority at the General Assembly passed a law in 2015, essentially providing that no memorial can be permanently removed from state property without approval by the N.C. Historical Commission. Even with that approval, lots of added hurdles in the law stand in the way. Given the political leanings of most of the Honorables, such approval isn’t likely to come any time soon.

So, remember this when some candidate tells you that we can’t afford new textbooks and supplies for our schoolchildren. Apparently we can afford $400,000 or so a year to have policemen guard a statue.

There may never have been a more important time for education advocates to step up and run for a seat... read more