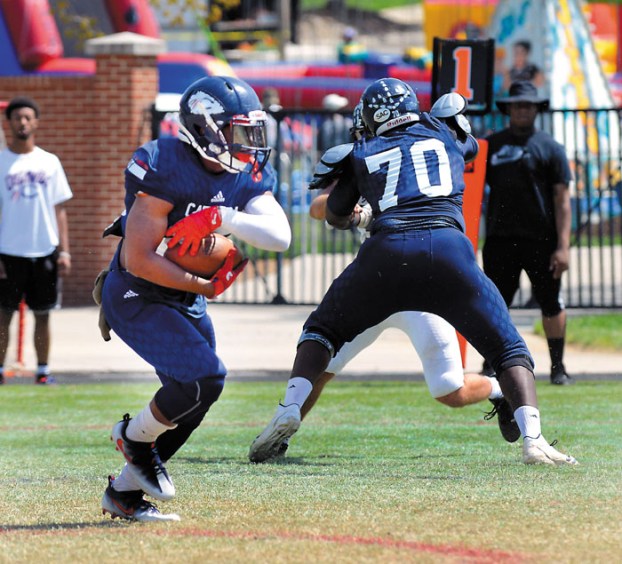 Wayne Hinshaw file/for the Salisbury Post ... Catawba running back Demonte Good, left, shown in April’s spring game, receiving a block from lineman Darius jackson (70), is from Virginia but has many relatives in Rowan County.

College Football: Good … and getting better

Good on the upswing for Catawba 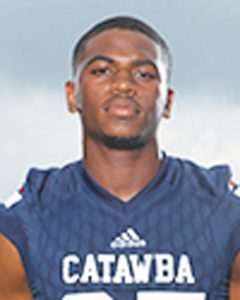 One of the eight children from their union was Robert Hammond Jr., a 1965 Dunbar High graduate who married a Salisbury girl and enlisted in the Air Force. A technical sergeant, Hammond was stationed for years at Langley Air Force Base in Hampton, Va., before retiring. He died at 59 in 2006. Hammond’s daughter, LaKysha, is Good’s mother.

Good still has a small army of family located in Salisbury, Spencer and East Spencer  — cousins, second cousins, aunts and uncles. Among others, he’s related somewhere on the family tree to Catawba linebacker and North Rowan graduate Eric Gibson.

“I do have a lot of family members in this area,” Good said. “That was a factor in me coming to Catawba.”

Good was a baseball-loving kid at first, but gradually his attention turned to football.

Most of his coming-of-age years were spent in Hampton, but he played his high school football for the Warwick High Raiders in nearby Newport News.

If you’re an old-timer, you may remember Warwick High grad Norm Snead  (both his parents worked in the Virginia shipyards) who quarterbacked Wake Forest, was the second pick in the NFL draft in 1961 and was a four-time NFL All-Pro with the Washington Redskins and Philadelphia Eagles.

If you’re closer to the 20-year-old Good’s age, the guy who put Warwick High on the map was another quarterback from another generation.

“Warwick, that was Michael Vick’s high school,” Good said with some pride.

When Vick was in the Virginia high school ranks in the late 1990s, he was following right behind athletic legends from that area, including Allen Iverson and Ronald Curry, who had led his Hampton High team  to three straight football state titles, plus a basketball state championship.

But a lot had changed at Warwick when Good was coming through. Hard times. Warwick won just eight games in Good’s four years of high school.

A receiver most of his high school career, Good made a transition to running back as a senior. That put the ball in his hands more, and he did what he could.

Good was Warwick’s best player and team leader and managed more than 900 all-purpose yards as a senior. He played in a postseason all-star game, but he was an average-sized guy at 5-foot-10, and he was smaller than the 185 pounds he carries now. Good had exceptional grades and no character questions, but there weren’t any scholarship offers to speak of.

Catawba was fortunate to get him as a walk-on.

In 2017, Catawba was well-situated at running back. Senior Eamon Smart, a 215-pound bulldozer, was finishing up a productive career, while quick West Virginia transfer Kenyatta Greene was emerging as a potential superstar who deserved as many touches as the Indians could give him. Good was the third guy on the depth chart and got only six carries all season.

“Obviously, he wanted to play more and I wanted him to be playing more,” Catawba head coach Curtis Walker said. “But there are only so many carries to go around and we had two good guys ahead of him.”

Good didn’t pout. He stayed with it, kept working. This season, Greene is still the primary running back for the Indians, but Good has carved out a role.

“Guys joke around with Good about being a replacement for Greene, a backup, but he’s a lot more than that,” Walker said. “He’s worked his way into a situation where we look at our running backs now as a true 1-2 punch, not just a starter and a backup. And that 1-2 punch is what we like to have.”

Good proved his mettle at ranked West Georgia on opening day. With Catawba’s running game struggling, Good suddenly got things moving when he entered the fray. He had 31 yards on five carries on a hard-nosed drive, exceeding his production for the 2017 season.

“I just try to follow the blocks, make that first guy miss, and keep my legs moving,” Good said. “I try to be tough to tackle.”

At Winston-Salem State, in Catawba’s lone win of the season, Good scored his first college touchdown.

Good, an exercise science major who has been strong in the classroom, got 16 carries in Catawba’s first two games. Then he logged 16 more last Saturday in the 39-33 loss at Mars Hill. He was steady, punching out 62 yards, almost 4 per carry.

“I’m just trying to get the yards and help keep our offense moving,” Good said. “I can get 5 tough yards and keep things moving. That’s what I do.”

Most of Good’s yards have been rugged ones, between the tackles, “downhill running,” as the coaches like to call it.

“He’s been good,” Walker said, not intending to make a pun. “He’s given us a nice change-up to Greene.”

NOTES: Catawba’s player of the game at Mars Hill was defensive lineman Jordan Hemingway, who found a weak link in Mars Hill’s kicking unit and burst up the middle to block two PAT attempts. “Jordan never takes a play off, and that kind of effort on special teams is going to win us a game at some point this season,” Walker said. … Walker was awed like everyone else by the TD catch that freshman Chylon Thomas made of a low throw in the end zone at Mars Hill. “He’s not big, he’s still got that freshman body, but his speed makes him a big threat as a slot receiver,” Walker said. … Linebacker Jeremiah Ferguson (6-0, 220), who had a lot of success at North Greenville before injuring a shoulder and transferring to Catawba, was the Indians’ leading tackler at Mars Hill and is turning heads. … Reid Carlton had a career game Saturday (363 passing yards, three passing TDs, one rushing TD) and was named the team’s offensive player of the week. … Catawba (1-2, 0-1 SAC) faces  a critical game on Saturday when Carson-Newman (2-2, 1-1 SAC) visits at 1:30 p.m. for the first home game of the season. Carson-Newman beat Wingate but lost to Newberry. … Carson-Newman is 38-12-1 against Catawba. … The game will be broadcast by WSAT and will be televised on Charlotte’s Channel 64.