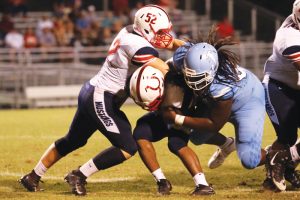 MOUNT ULLA — If Jalen Houston has an “off” switch, nobody’s discovered it.

The West Rowan receiver played Friday night’s North Piedmont Conference opener against visiting East Rowan at video-game speed, sprinting like a cheetah at dinnertime both during — and following — the Falcons’ 35-14 victory.

“Jalen’s always on the move,” West coach Joe Nixon said after Houston spurned a post-game interview request and made a swift exit. “You’ve got to be pretty quick to catch him.”

Houston was impossible to catch. The junior scored four touchdowns — three on perfectly threaded passes from quarterback Payne Stolsworth and another on a soul-crushing, 80-yard kickoff return with 20.4 seconds remaining in the first half. He finished the game with five receptions for 181 yards.

“If you don’t have speed that’s close to matching his speed, it’s really hard,” East coach John Fitz said after the Mustangs (3-4, 0-1) dropped their fourth straight. “And it’s going to be hard for everybody. He just ran past us tonight.”

It was suggested this was the explosive performance West (4-3 overall) and Houston have been waiting for, but Stolsworth nixed that notion.

“Me and Jalen have big expectations for ourselves,” he said after passing for 260 yards and four touchdowns. “This is what we strive to do every week. It’s what every game should be like.”

The only problem Stolsworth and Houston had was too much of a good thing. They got the party started late in the first quarter, connecting on a 47-yard fly pattern down the right sideline to open the scoring.

“Our DB’s prepared for him,” said East’s Sammy Pinckney. “We just needed to break it down faster and cover him tighter. We know he’s faster than half the county.”

Pinckney, a sophomore running back who has become more of a workhorse than a show pony, was East’s top rusher with a career-best 228 yards on 41 carries. The Mustangs collected 18 first downs and racked up 328 yards on the ground, but repeatedly hurt themselves with red-zone mistakes.

“We knew they were going to run the ball heavy,” said West defensive back D.J. Robinson. “And they moved the ball all night. But our defense stayed strong, stayed united. We were able to get stops and get off the field.”

That meant more opportunities for the West offense. Stolsworth and Houston hooked up twice on TD plays in the second period, beginning with a 72-yard score just nine seconds into the quarter that bumped the lead to 14-0. Houston found a seam between two defenders, snagged the ball without breaking stride and motored untouched into the end zone.

“On the first touchdown they left him one-on-one with a corner and no safety over top,” Stolsworth explained. “The second one was a double move, a corner post on the safety.”

“We knew what we were going to get in certain formations,” the coach explained. “It was just a matter of the guys going out there and executing it. When Jalen gets in the open, there aren’t many guys who can catch him. He’s special with the ball in his hands.”

Midway through the quarter, Houston struck again. This time he snared a 39-yard pass through an East zone and back-pedaled into the end zone for a three-score advantage. East scored its first touchdown with less than a minute remaining in the first half when senior Sam Wall darted into the end zone on a 5-yard run, capping a 10-play drive that trimmed the deficit to 21-6. But the Mustangs’ celebration was curbed just 13 seconds later, when Houston returned the ensuing kickoff for a TD down the left sideline — his 11th of the season.

“We probably weren’t going to get any more points before halftime without a good return,” said Nixon. “We kind of bobbled it a little bit and then (Houston) got in a tube and took off. Once he got to midfield, they weren’t going to catch him.”

Stolsworth said he and West assistant coach B.J. Sherrill had just been discussing such a play. “We were saying how we hadn’t returned a kickoff for a touchdown all year — and right then it happens,” he reported. “It was weird but it was cool.”

So was Pinckney’s uncanny display of speed and power for East. He toted the ball seven times for 42 yards on an impressive third-quarter drive that produced a Christian Bennett touchdown. He finished with 124 rushing yards in the first half and 104 in the second.

“You had to get him in the backfield if you wanted to bring him down,” said West DB Jason Artis. “We had to push their O-line back, but he was tough to tackle. We ended up playing with a lot of intensity. Sometimes you just have to play your heart out.”

By doing so, they’ve given the rest of the NPC something to worry about. “There are only four conference games left,” Nixon said. “And 1-0 is the best you can be after the first one.”

NOTES: East finished 378 total yards, eclipsing the Falcons by 33. … Robinson and JooJo Brush had interceptions for West and Tahj Young picked one off for the Mustangs. … West closed the scoring on the first play of the fourth quarter — a 33-yard TD pass from Stolsworth to junior Quay Weeks. … East visits Carson and West travels to South Iredell next Friday.

By David Shaw sports@salisburypost.com SALISBURY — Break out the erasers. Anyone who had East Rowan senior Carmen Fraley penciled in... read more