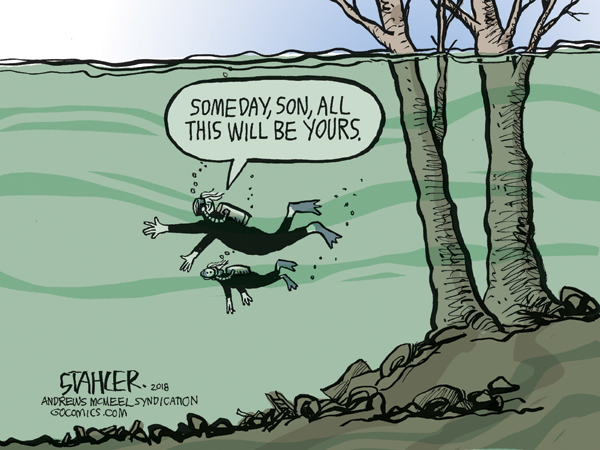 What if the end of the world came and nobody noticed?

It’s not quite an idle question.

You see, something remarkable happened last week. The Intergovernmental Panel on Climate Change, a group of scientists working under the aegis of the United Nations, issued a report on our planet’s health. Turns out it’s worse than we thought. Barring prompt — and politically unlikely — measures to drastically cut carbon output within the next decade, they say we’ll begin to see worsening droughts, wildfires, coral reef decimation, coastal flooding, food shortages and poverty beginning as soon as 2040.

You can expect mass evacuations from the most heavily impacted areas. As one of the report’s authors, Aromar Revi, director of the Indian Institute for Human Settlements, told The New York Times, “In some parts of the world, national borders will become irrelevant. You can set up a wall to try to contain 10,000 and 20,000 and 1 million people, but not 10 million.”

And we haven’t even gotten to the remarkable part yet. That has to do with our collective response to this doomsday prognosis. In a word, America shrugged.

That’s a necessarily subjective analysis, but I’ll stand by it. Yes, news media dutifully reported the story and pundits dutifully sounded the alarm. But none of it seemed to quite register. Two days later, the story was pretty much over, our attention having already moved on.

You might correctly say this is to be expected, given the lack of environmental leadership from a White House that wants to bring back coal. But there’s also a subtler force at work.

So then you read where the planet is melting, dire results expected soon, and you just shrug and file it away with all the other terrible things you’ll worry about when you get a chance. That’s understandable. But it presumes a luxury we don’t have — time. Again, this report says the world has 10 years in which to save itself — and we’ll spend at least two of those under Trump.

Always before, the hinge points of American history have somehow managed to find the people the times demanded: citizen soldiers at the founding, Union patriots at the unraveling, tough-minded strivers during depression and global war, American dreamers in the freedom years. But seldom before has the nation seemed as exhausted and fractured as it does now.

So the question of the moment is: What will this new hinge point bring out of us? The answer will come at the ballot box over the next two years. And the whole world waits with us to find out what we are. Are we truly the ignorance, incoherence and chaos of the moment, or are we the sense of purpose and can-do that have always before defined America at its crossroads?

If we say it’s the latter, then we should feel ashamed, chastised by our history. Because if that history tells us anything, it tells us this:

Leonard Pitts is a columnist for The Miami Herald, 1 Herald Plaza, Miami, Fla., 33132. Readers may contact him via e-mail at lpitts@miamiherald.com.

In the 1972 movie, “The Candidate,” a man helping Robert Redford’s character run for Senate quips, “We haven’t made many... read more