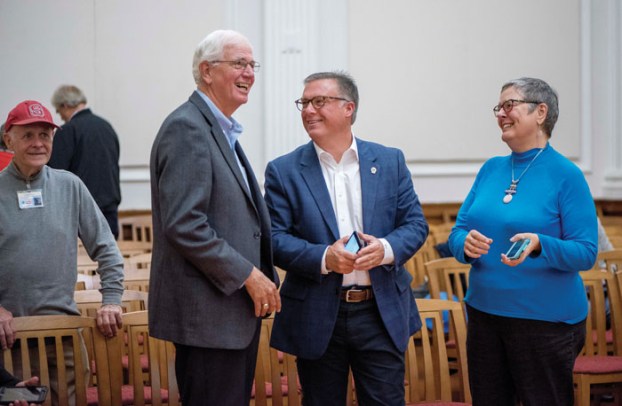 SALISBURY — Republican incumbents Greg Edds, Jim Greene and Judy Klusman won easy victories over Democratic challengers Veleria Levy and Latasha Wilks in the race for the Rowan County Board of Commissioners on Tuesday.

With 49.35 percent of Rowan voters casting ballots, the candidates finished in this order:

“It means a lot more work, but that’s OK,” said Edds, who has been chairman throughout his first term on the board. The win shows that voters are happy with the job the incumbents have done, he said.

Klusman, who came in third in 2014 and nearly lost, was surprised to lead the ticket this time. “And grateful,” she said.

“I think John, Greg and I have really ushered in a new era,” Klusman said.

They campaigned in 2014 for a more positive tone in county government and a more business-friendly atmosphere.

“I think voters are saying yes, we want you to keep doing what you’re doing,” she said.

Greene said he was thrilled with the results and echoed his running mates.

“We feel we have the right agenda for Rowan County,” he said.

He said he looks forward to making more progress, especially in the area of education, helping the schools and “doing the things we think will make Rowan County prosperous.”

Levy said she is optimistic, even though she lost the election.

“I am super excited at the progress we made,” she said.

She and Wilks received key endorsements, including from the Rowan County Association of Educators, she said. And Levy got to spread her message that Rowan needs more vocational education and a “ban the box” initiative to help former inmates be considered for more jobs.

She said she wanted to congratulate the winning commissioners and thank those who supported her. “I look forward to continuing to have a positive message.”

All three incumbents were campaigning for their second terms on the Board of Commissioners.

This triple-Republican victory follows a heated primary with a total of six names on the ballot. Candidate Michael Julian was the only newcomer of three challengers, including current Commissioner Craig Pierce and on-again, off-again board member Jim Sides.

Pierce campaigned two years before his term on the board was set to expire, saying he had no intention to run again but needed four years to see to the completion of water and sewer extensions along Interstate 85. He lost.

The general election remained more positive, with incumbents focusing on the forward-moving momentum of the county over the past four years.

It’s a direction the three intend to see continue, starting by working on water and sewer for the south Rowan area at the new interstate interchange, the subject of a called meeting they’ll hold next Tuesday, according to Edds.

“We want 21st-century jobs that can support families without people having to have second jobs.”

Klusman talked about education as well, and tackling the opioid epidemic — “work on having a healthier Rowan and recruiting business.”

Edds said his word going forward will be “alignment,” working with schools and colleges to align their economic interests and step up Rowan’s education game. “The world is our oyster; we’ve just got to claim it,” Edds said.