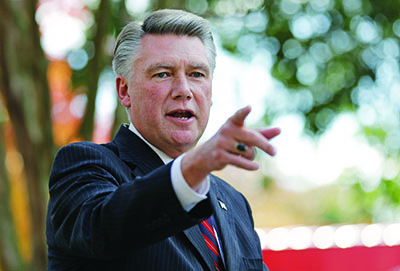 Mark Harris speaks to the media during a news conference in Matthews on Nov. 7. The nation's last unresolved fall congressional race with Harris against Democrat Dan McCready is awash in doubt. (AP Photo/Chuck Burton, File)

Leonard Pitts: This is what actual election tampering looks like

I said it before, I’ll say it again.

“As this country becomes blacker, browner, gayer, younger, more Hispanic and more Muslim, it is increasingly the case that the GOP cannot win if all voters vote. It cannot win, in other words, without cheating.” That observation, made in this space a few weeks back, was, let us say, not applauded by conservative readers.

Not that their vexation was surprising. In the face of dwindling numerical primacy, much of the right has seized, like a pit bull on a steak, upon a narrative diametrically opposed to the truth. It casts them as the real victims here, contending with a widespread conspiracy of voter fraud in which armies of “illegals” vote early and often, to the detriment of good, God-fearing conservatives.

Those who believe that claptrap can produce not a single fact to support it, but they cling to it nevertheless. It is their life raft upon a sea of change.

Well, last week, the life raft sprung a leak — again. The reference is to news out of North Carolina that the bipartisan State Board of Elections and Ethics Enforcement has now twice declined to certify Republican Mark Harris as the winner of a Congressional race amid charges of GOP dirty tricks. Specifically, there are accusations, backed by statistical analyses and eyewitness accounts, that people acting on Harris’ behalf went door to door in Democratic-leaning areas, collected absentee ballots from voters in potential violation of state law, and diverted them from the ballot box. Given that Harris “won” by a paltry 905 votes, those accusations are seismic.

More to the point: As Republicans go about claiming victimhood in a “conspiracy” that is a figment of their collective imagination, this is what actual election tampering looks like. Not millions of people voting who shouldn’t but rather votes stolen, by chicanery, mendacity and intimidation, from people who have every right to participate in the electoral process.

And that’s just one example. There are many more. This year in Georgia, for instance, 4,700 voters found that their vote-by-mail application forms had mysteriously gone missing. In Wisconsin, certain voters received fliers warning that ICE would be patrolling polling places. In New York state, a GOP candidate sent out fliers with false deadlines for the return of absentee ballots. All this, according to the nonpartisan Brennan Center for Justice at New York University School of Law.

Nor should it surprise anyone that this kind of flimflam — to say nothing of photo ID laws, bans on early voting, closures of polling places and other impediments — tends to have its greatest impact upon Democratic voters; that’s what it’s designed for. If there is a corresponding litany of abuses that disproportionately suppresses Republican votes, I’ve never heard of it. I doubt anyone has.

So one gets sick and tired of watching Republicans hyperventilate about a problem that does not exist while ignoring one that does. If they are really serious about confronting threats to the integrity of American elections, the first step is to get a mirror.

The second is to come to terms with reality. America is changing, rapidly, dramatically and irrevocably. And the GOP needs to figure out how to compete in this new nation, how to make itself a party whose appeal extends beyond angry, older white male voters. That’s a reckoning the right has avoided for years, but it becomes less avoidable every day.

Indeed, not all the dirty tricks and photo ID laws in the world can obscure the hard but simple truth Republicans face. Namely, that the future is coming, fast.

And they can’t cheat their way around it.

Week in review: Test your nose for local news

1. Salisbury City Council passed a resolution of intent this past Tuesday to establish a Fair Housing Committee, and the... read more