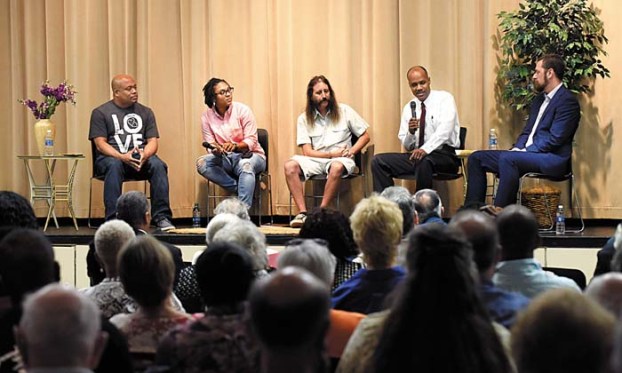 Pastor Anthony Smith, Ash Love, Mike-O Martelli, Dr. Claude Clegg and Dr. Seth Kotch at the Actions in the Faith and Justice program in 2017. Photo by Wayne Hinshaw, for the Salisbury Post

My turn, Kendal Mobley: How did reconciliation resolution get to its current point? 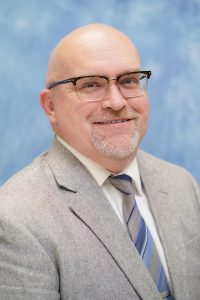 It’s an alliance of citizens dedicated to community-based dialogue and action to promote justice, eliminate disparity, establish equity and celebrate the common good.

In preparation for the 2017 event, AFJ consulted with the Equal Justice Initiative, a national advocacy organization with historical resources related to lynching in the United States, conferred with regional scholars and worked with other local groups over a period of several months. A diverse core group of approximately 20 religious and community leaders contributed to the 2017 commemoration event at the Salisbury Civic Center and an outdoor worship service at a location that is believed to have been a lynching site.

The organizers of those events wanted the lynchings be understood within the context of ongoing injustices that persist both nationally and locally in systemic, institutional contexts. The liturgy of the worship service was based upon processes of reconciliation and restorative justice, which include acknowledging and renouncing unjust actions, recognizing the harm such actions caused and continue to cause and making a commitment to eliminate causes and conditions that are inequitable and support injustice. At the Civic Center event, Mayor Karen Alexander read a proclamation that stated, in part, the 1906 lynchings “must be acknowledged and remembered through public discourse in order for our community to begin reconciliation and healing,” and she proclaimed “our commitment to truth, healing and reconciliation . . . and encourage(d) citizens to acknowledge the injustices suffered by African Americans in our community and to commit to action that improves the social, economic, health, and educational opportunities for all citizens of Salisbury.”

AFJ’s proposal retains the elements of reconciliation and restorative justice that shaped the liturgy of the 2017 worship service — acknowledging and renouncing unjust actions, recognizing the harm such actions caused and continue to cause and making a commitment to eliminate causes and conditions that are inequitable and support injustice. Furthermore, while the resolution clearly acknowledges the core issue of racial injustice manifested in the history of lynching, it embraces a broad vision of inclusion informed by the past but focused on the future.

The resolution includes a commitment on the part of the City Council to create an Equity Commission as an effective way to discern what is needed to improve the social, economic, health and educational opportunities for all citizens of Salisbury, articulated in the 2017 mayoral proclamation by Karen Alexander.

In the tradition of democratic self-governance, AFJ recommends a commission of citizens, appointed under the authority of the Salisbury City Council, who will work on a voluntary basis to gather facts and propose initiatives to level the playing field for all citizens. The commission’s primary purpose will be to advance the city of Salisbury’s commitment to greater equity, diversity and inclusion of under-represented populations in our community. To that end, the Equity Commission will collaborate with city staff and local leaders in the sectors of civic engagement, education, law enforcement, the court system, health care and social services to make recommendations to the City Council and provide a public annual report on its work.

AFJ is convinced that the citizens of Salisbury share a commitment to freedom, fairness and equality. Every citizen — regardless of race, creed, gender, ethnicity, or sexual identity — is entitled to contribute to and benefit from the common good in a way that is fair and free of bias or favoritism. As all citizens enjoy equal justice and equal opportunity, the whole society will flourish. To that end, we ask the citizens of Salisbury and the City Council to support this resolution.

Kendal Mobley serves on the Actions in Faith and Justice steering committee and teaches religious studies at Johnson C. Smith University in Charlotte.

Josh Bergeron: Location matters in a child’s chances for success

Whether it’s a few city blocks or the other side of the street, where a child grows up can affect... read more