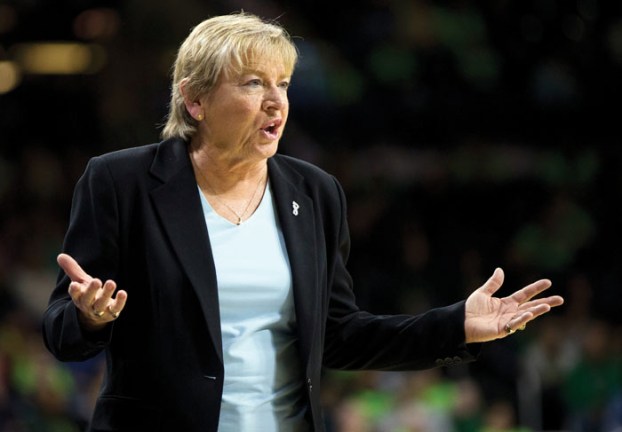 FILE - In this Feb. 1, 2018, file photo, North Carolina coach Sylvia Hatchell questions a call during the second half of the team's NCAA college basketball game against Notre Dame in South Bend, Ind. Hatchell has resigned after an external review found she had made "racially insensitive" comments and applied "undue influence" regarding players' ability to compete through medical issues. The school issued a release late Thursday, April 18, 2019, announcing the Hall of Famer's resignation and findings from the review by a Charlotte-based law firm. The review also reported "a breakdown of connectivity between the players and Hatchell" after 28 interviews of current players and program personnel. (AP Photo/Robert Franklin, File)

By AARON BEARD AP Basketball Writer
RALEIGH (AP) — North Carolina women’s basketball coach Sylvia Hatchell resigned Thursday after an external review found she had made “racially insensitive” comments and applied “undue influence” regarding players’ ability to compete through medical issues.
The school issued a release late Thursday announcing the Hall of Famer’s resignation and findings from the review by a Charlotte-based law firm. The review also reported “a breakdown of connectivity between the players and Hatchell” after 28 interviews of current players and program personnel.
Hatchell and her coaching staff had been on paid administrative leave since April 1, with UNC announcing the review amid player concerns to “assess the culture” of the program.
“The university commissioned a review of our women’s basketball program, which found issues that led us to conclude that the program needed to be taken in a new direction,” athletics director Bubba Cunningham said in a statement. “It is in the best interests of our university and student-athletes for us to do so.”
In a statement, Hatchell said the program “is once again headed in the right direction and ready for new leadership” after returning to the NCAA Tournament for the first time since 2015.
“While this is a bittersweet day, my faith remains strong,” Hatchell said in the statement. “After the fight of my life with leukemia (in 2013), I count every day as a blessing.”
Hatchell won the 1994 NCAA title and is the winningest coach in Atlantic Coast Conference history with 1,023 victories, with 751 of those coming in 33 seasons in Chapel Hill.
Hatchell became the third women’s coach in Division I with 1,000 career victories in 2017, made her 23rd career NCAA Tournament appearance last month and is the only coach with national championships at three levels — AIAW, NAIA and NCAA.
She didn’t coach during the 2013-14 season after being diagnosed with leukemia and undergoing chemotherapy. The program also spent several seasons under the shadow of the school’s multi-year NCAA academic case dealing with irregular courses featuring significant athlete enrollments across numerous sports, a case that reached a no-penalty conclusion in October 2017.
Hatchell received a contract extension in September 2016 that runs through the end of next season.
North Carolina went 18-15 this season with upsets of top-10 teams North Carolina State and Notre Dame. The Tar Heels lost to California in the first round of the NCAA Tournament.
___
Follow Aaron Beard on Twitter at http://www.twitter.com/aaronbeardap
___
More AP college basketball: https://apnews.com/CollegeBasketball and http://www.twitter.com/AP_Top25

By Joe Reedy AP Sports Writer Howard Katz has the most unenviable task in the National Football League. As the... read more