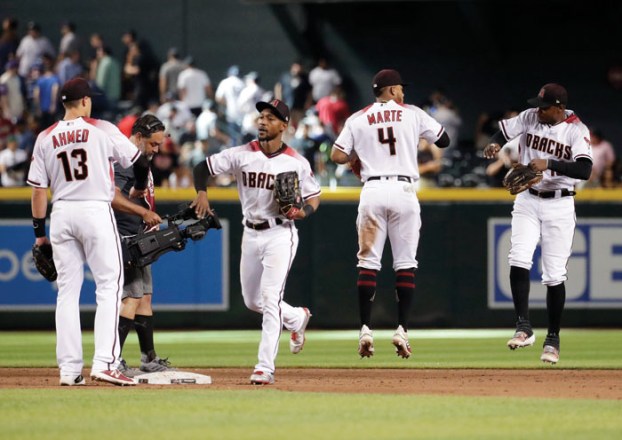 Arizona Diamondbacks celebrate after a baseball game against the New York Yankees, Wednesday, May 1, 2019, in Phoenix. The Diamondbacks won 3-2. (AP Photo/Matt York)

New York dropped to 0-5 this year against teams that currently have winning records and is 17-8 against clubs that started the day under .500.

Kelly (3-2) allowed one run and five hits in 5 1/3 innings as Arizona won for the seventh time in nine games.  Greg Holland pitched around Cameron Maybin’s one-out walk in the ninth to remain perfect in seven save chances.

BOSTON (AP) — Mitch Moreland homered and drove in another run on a sacrifice fly after a lucky hop off the second base bag moved the runners along as Boston completed a three-game sweep.

A day after his first career home run put the Pirates ahead in the 11th inning of a 6-4 win that ended an eight-game losing streak, Reynolds extended his career-opening hitting streak to nine games with a liner over left fielder Joey Gallo in the fourth.

Felipe Vázquez got his eighth save by striking out Shin-Soo Choo and pinch-hitter Hunter Pence with the potential tying run at second in the ninth.

In the opener, Adalberto Mondesi hit a two-run homer in a three-run first inning for Kansas City, and Jacob Junis (3-2) and the bullpen held on.

Snell was easily outpitched by Glenn Sparkman (1-1), who was recalled from Triple-A Omaha and earned his first career win.

Branden Kline (1-0) pitched two scoreless innings, and Mychal Givens got four outs for his second save, striking out Jose Abreu with a runner on first to end the game.

The Braves led 2-1 before scoring three runs in the seventh off Luis Perdomo. Ronald Acuña Jr. drove in Charlie Culberson from third base with a pinch-hit infield single as catcher Francisco Mejia dropped shortstop Manny Machado’s throw when shifting to make the tag. Swanson followed with a two-run homer.

Fried (4-1) allowed four hits. He had seven strikeouts and gave up a fourth-inning homer to Machado.

Fried made his first career start against San Diego, the team that made him the No. 7 overall pick in the 2012 draft. The left-hander was traded to Atlanta as part of the 2014 deal that sent outfielder Justin Upton to San Diego.

Left-hander A.J. Minter, whose recent struggles threatened to cost him the closer’s job, pitched a perfect ninth in a non-save situation.

NEW YORK (AP) — Jose Iglesias homered off Edwin Diaz in the ninth inning to give the Cincinnati Reds a 1-0 victory over the New York Mets on Wednesday night.

It was the second time in three nights that Diaz (0-2) gave up a tiebreaking homer to the Reds in the ninth.

Jesse Winker connected against the All-Star closer in the series opener Monday to give Cincinnati a 5-4 victory.

Padres: RHP Phil Maton was optioned to Triple-A El Paso and RHP Miguel Diaz (torn meniscus) was transferred to the 60-day injured list to clear a roster spot for Quantrill.

Braves: 3B Josh Donaldson was held out for the second straight day with right calf soreness. Manager Brian Snitker said Donaldson was better and “hopefully” will start on Thursday. … CF Ender Inciarte (tightness in right hamstring) started after being limited to pinch-hitting on Tuesday night.

Padres: LHP Matt Strahm (0-2, 3.04 ERA) will look for his first win of the season when the four-game series ends on Thursday. He has a 1.50 ERA over his last four starts.

All or nothing: Homers, strikeouts on record pace