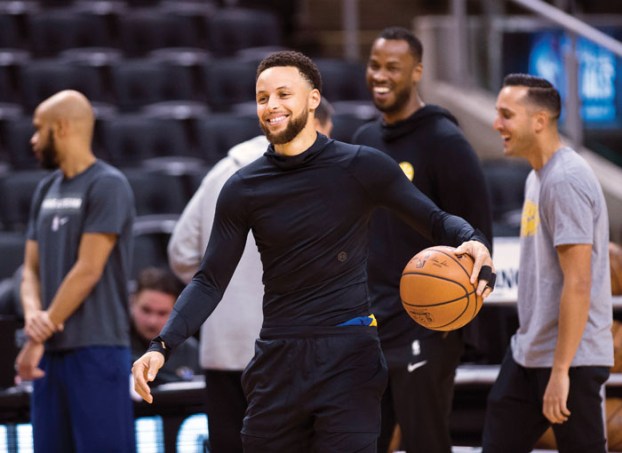 Golden State Warriors guard Stephen Curry smiles during practice for the NBA Finals against the Toronto Raptors in Toronto, Wednesday, May 29, 2019. Game 1 of the NBA Finals is Thursday in Toronto. (Nathan Denette/The Canadian Press via AP) 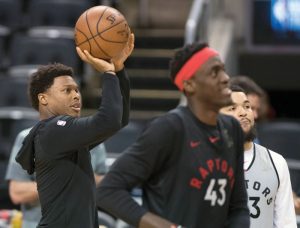 Toronto Raptors’ Kyle Lowry shoots 3 pointers during practice for the NBA Finals in Toronto on Wednesday, May 29, 2019. Game 1 of the NBA Finals between the Raptors and Golden State Warriors is Thursday in Toronto. (Frank Gunn/The Canadian Press via AP)

The Golden State Warriors’ road to a fifth straight NBA Finals has detoured to a new destination — and this one requires a passport.

The Toronto Raptors, a team that arrived in the NBA 24 years ago as the dinosaur-logoed basketball franchise in a hockey-loving country, have finally made it to the championship round and will host Game 1 on Thursday night.

It’s the first time the finals will be played outside the U.S., a refreshing change after a record four straight seasons of the same matchup.

“This is more what the finals normally feel like, where you’re going against a team you frankly don’t know that well and that you haven’t seen that often over the previous few years.”

Stephen Curry lived in Toronto when his father Dell played for the Raptors at the end of his career, but otherwise it’s a new feeling even for these Warriors, who are one of the most championship-experienced teams in NBA history.

They joined the Boston Celtics from 1957-66 as the only teams to reach five straight NBA Finals, and are trying to become the first team to win three consecutive titles since the Los Angeles Lakers of 2000-02.

Besides facing a different opponent for the first time during their run, the Warriors won’t have the luxury of starting the series at home for the first time. They also won’t have Kevin Durant for at least one more game, though none of that rattles a team that has played in 22 finals games in the last four years.

“We have been here before,” Curry said. “We understand the hoopla and the pandemonium around the finals and how different things are when it comes to just the schedule and the vibe. So we have seen a lot and we’ll be ready for it.”

The Raptors are new to this stage, but their players aren’t. Kawhi Leonard was MVP of the 2014 NBA Finals, when he and Danny Green won a title with San Antonio. Serge Ibaka made it to the finals with Oklahoma City in 2012, and even players such as Kyle Lowry and Marc Gasol have played in Olympic finals.

“It’s just the same basketball game,” Leonard said. “It’s 5-on-5. It’s still two hoops. So you just go out there and play hard and live with the results.”

The Raptors had already moved away from their purple uniforms with the red dinosaur, and their reputation as a loser is extinct, too. They have won 50 games in four straight seasons and have the best record in the East over the last seven, but couldn’t get over the hump until this year, thanks largely to the acquisition of Leonard last summer.

He hit the winning shot in Game 7 of the second round and then led Toronto’s charge back from a 2-0 deficit against Milwaukee in the conference finals to win four straight against the team with the NBA’s best record.

They made history just by bringing the finals to Canada and the doorstep of their rowdy fans in Jurassic Park . But Lowry has more in mind.

Some other things to know abou the NBA Finals:

DeMarcus Cousins (torn left quadriceps) may be ready to return but it could be a little longer for Durant (strained right calf). Kerr said the two-time NBA Finals MVP, already ruled out for Game 1, hasn’t practiced and would have to do so before returning.

Golden State has won 12 straight Game 1s, including all four in the NBA Finals since 2015, and Gasol was asked for Toronto’s key to getting the series off to a good start.

“Every possession from the jump ball,” he said, “competing, communicating, solving issues as we face them. Do not overreact to whatever.”

Kerr won a championship four years ago in his first season as an NBA head coach and now Nick Nurse can do the same. He was promoted last year after the Raptors fired Dwane Casey, and earlier in his career had been a head coach in both the NBA Development League and the British Basketball League.

Another title would be the Warriors’ seventh and move them into third place in NBA history behind only the Celtics (17) and Lakers (16).

Hard-hitting Twins are talk of baseball

By Dave Campbell AP Sports Writer MINNEAPOLIS (AP) — The signs of a potent lineup were evident with the Minnesota... read more