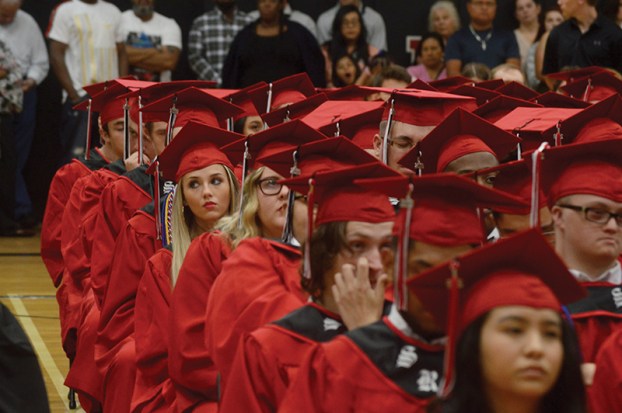 LANDIS — A new graduate of South Rowan High School, Brylan Barrier wiped away tears streaming down his face as he shared an intimate moment with friends and family following the school’s commencement ceremony on Saturday.

Barrier was one of 242 students who were awarded diplomas in front of a packed house of about 1,700 in the gym. The auditorium, with a capacity of 1,200, held another crowd of friends and family members, who watched a video feed from the gym. 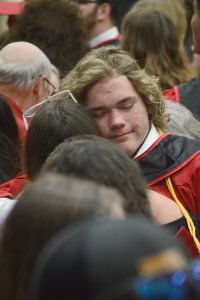 While the school in recent years held its graduation ceremony in its football stadium, this year’s commencement was moved indoors because of expected inclement weather and tickets were issued to students, limiting the number of friends and family members who could attend.

The South Rowan class of 2019’s valedictorian was Kristen Minehart and its salutatorian was Lauren Elizabeth Shell.

Minehart, who spoke Saturday, encouraged her fellow graduates to leave room in their suitcase for future dreams.

Gavin Thompson, who was voted by his classmates most likely to win the Nobel Prize, reminded soon to be graduates they had had a “hero” to help them along the way to their current position, to be adventurous and push their boundaries and to “never say goodbye because goodbye means going away and going away means forgetting.”

Bailee Elliott, South Rowan student body president, used the school’s mascot — the Raider — as an acronym for how graduates should approach their future, whether it was college, the workforce or military.

Elliott encouraged fellow graduates to rely on the person they had become to make decisions; to accept, learn to change the things they could not accept and learn to love what they could not change; to inspire themselves and everyone around them; to do what is right, to expect the best in every situation and the remember where they came from. 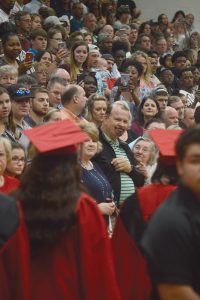 Josh Bergeron / Salisbury Post – Family members of soon to be graduates look on as the enter South Rowan High School’s gym on Saturday. The school awarded an estimated 242 diplomas.

After diplomas were awarded and the newly minted graduates turned their tassels, they started the next chapter — college, the workforce, the military, a gap year or just getting started on deciding what comes next.

By Mark Wineka mark.wineka@salisburypost.com MOUNT ULLA — When Matthew Ramsay was 5, his “Pap” would round him up and say,... read more