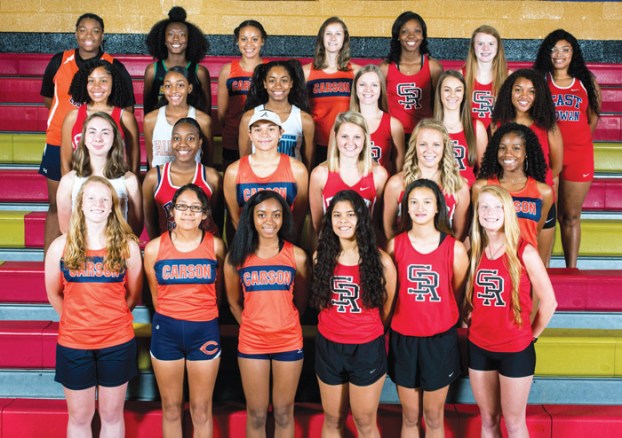 All-County: The best in girls track and field 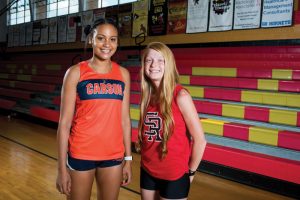 The Catawba-bound Lowery is a distance demon, seemingly tireless. She runs the long stuff — 800 meters, 1600, 3200 and 4×800 . She dominated the competition in Rowan County, was stout in a challenging Central Carolina Conference, and competed well at the 2A state level.

The UNC Wilmington-bound Gadson is a sprinter, all flying arms and legs. She runs the short stuff — 100, 200, 400 and 4×200. She ruled the competition in Rowan County dashes and followed her county success with another sweep of her four events in the 3A North Piedmont Conference Championships.

Both girls are strong-willed and fiercely determined. Yet they are also compassionate and committed teammates. Both were honored after the Rowan County Championships, as the best in their respective specialties.

Their events never intersect, so there was no easy way to separate their performances. Lowery and Gadson, the solo winner in 2018, share the Post’s Rowan County Female Track Athlete of the Year honor.

Both girls overcame pain that could’ve ended their season prematurely.

“Shin splints took a toll on me and also took a toll on my times,” Gadson said. But I did my best and tried to lead. I felt good about my senior year. We won team championships.”

Lowery was diagnosed with patellofemoral pain syndrome, commonly known as runner’s knee. She sparked a South team that was county runner-up to Carson and conference runner-up to Ledford.

“It was hard, but I also do cross country and that helps me a lot,” Lowery said. “I get tired like everyone else, but I can keep pushing.”

As a South junior in the fall of 2017, Lowery came out of virtually nowhere (12th in the county in 2016) to take control of Rowan County cross country. She won the county meet and was 10th in the 2A State Championships. Her coach at South then, Robert Marchinko, now a Catawba assistant, said in 25 years he’d never seen anyone improve so much in a year’s time.

“Madison just gets it,” Marchinko said. “She wants to be great, and she’s not afraid to do the work — on a daily basis — to make that happen.”

But in the fall of 2018, South won a county cross country  championship without Lowery. She had transferred to Forestview High in Gastonia.

She returned to South for her last semester of high school. She qualified for the 1A/2A Indoor State Championships and placed ninth in the 1600.

Gadson has been at Carson all along, but things were different for her as a senior.

She’d always had her twin sister, McKenzie, to help rack up points in sprints and jumps. McKenzie, who signed to play basketball at Anderson University, wasn’t part of Carson’s track team  this spring, but Mikaila didn’t let the Cougars slip.

What Gadson accomplished in the county and NPC as far as sweeping the three individual sprint events, is even more difficult than it sounds.

In a standard track meet, there are 12 running events. None of Gadson’s events were very early or very late. The 100 meters is usually the third event, with the 4×200 coming right behind it. The grueling, draining 400 is the seventh event, while the 200 that concluded her day, is the 10th running event.

“The 100, 200, 400, and 4×200 are super close together in a meet, so for her to be able to do all four and win them in both the county and conference meet says something,” Carson coach Les-lee Ihme said. “Typically, your best 100 runner isn’t your best 400 runner, but she is so versatile. She can do it all. Unfortunately, we can’t use her in everything.”

Ihme has no doubt that Gadson could have competed  at a winning level in the 800 and the long  jump, as well, but athletes are limited to four events in a meet.

Lowery’s day usually started as the anchor leg on the 4×800 team. She helped South be strong in that event, winning the county and placing second in the CCC Championships.

By the time, the 3200 rolls around, even Lowery is close to running on empty.

“Her drive to push herself and her passion for running made her successful and made her a leader for our team,” South coach Rebekah Julian said. “Even after four events, she was always cheering for her teammates. Her smile was infectious and her desire to succeed was exceptional. She gave everyone on our team a reason to run their best.”

Gadson has been part of the strongest track and field run in Carson history, a Rowan three-peat and back-to-backs in the NPC.

Ihme said she’s not only pushed herself, she’s made her teammates better.

“Mikaila has a winning attitude, leads by example and is a genuinely good person who cares about her teammates,” Ihme said. “There were days when I was set to work with the distance runners and she came to practice already prepared with a workout to do. She would execute that workout and also recruit the other sprinters to do it with her. I believe this tenacity helped her and our other  sprinters achieve all they did this year.”

The only disappointment for Gadson this season came in the 3A Midwest Regional in Monroe. Her best individual event is the 400, but she finished sixth in a tough regional field and only the top four finishers advanced to state. She also had a chance to make the state with Carson’s 4×200 team, but a DQ knocked out the Cougars.

After a perfect county meet, Lowery scored 21 individual points in the CCC Championships, with seconds in the 1600 and 3200 and a fourth in the 800.

In the 2A Midwest Regional held at Surry Central, Lowery was a triple state qualifier, placing third in the 3200 (four seconds off the pace), fourth in the 1600, and fourth in the 4×800.

She represented South well in the 2A State Championships, finishing ninth in the 1600 and 10th in the 3200. She ran the anchor leg on the 4×800 relay with Bethany Rymer, Anahi Reta and Bailee Elliot. They finished 10th.

“That’s what I’m proudest of as far as my high school career,” she said. “I made it to a lot of state championships.”

Lowery will be reunited this fall with Marchinko,who was hired in 2018 as assistant cross country and track and field coach at Catawba. He’s a distance expert. Lowery will be a prize pupil.

“We’re  excited about Madison joining our Catawba family,”Marchinko said.  “I was fortunate enough to get to coach Madison her junior year at South. Her enthusiasm and mental toughness for running will have a positive impact on Catawba cross country and track and field. The future is bright for her and we expect her to have an immediate impact on our program.”

Meanwhile, Gadson moves on to D-I UNC Wilmington’s track program. She signed with the Seahawks back in November.

NOTES: Ihme is the Post’s choice for Rowan County Coach of the Year for guiding the Cougars to their third straight county title and second straight NPC crown.  …  South senior Janiya Downs, Field MVP for the Rowan County Championships, scored 23 individual points in jumps and sprints in the CCC Championships. … North senior La’Kayla Birst tied for second in the 1A State Championships in the high jump and placed ninth in the 300 hurdles. .. East senior thrower Iyahnna Neal  (Field MVP) and Carson junior runner Kimberly Barrera (Distance MVP) received accolades from the NPC.