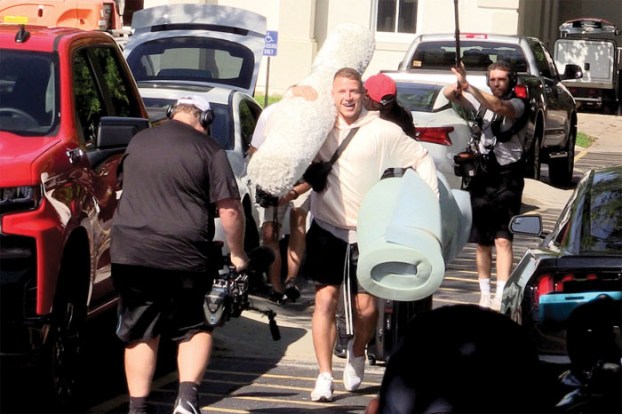 Jeff Siner/The Charlotte Observer via AP ... The media (left and right) follows Carolina Panthers’ running back Christian McCaffrey, center, as he carries a rug and padding to his room at the team’s dormitory at Wofford College in Spartanburg on Wednesday. The Panthers will hold their first practice of NFL training camp today at Gibbs Stadium on Wofford’s campus.

Panthers arrive for camp in Spartanburg 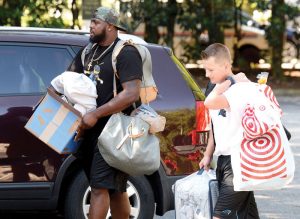 “We have a plan,” Rivera said Wednesday. “Obviously it will be structured around our installation. So the things that we have going on with our install will dictate what he does.”

The Panthers arrived at Wofford College for their 25th training camp with plenty of questions, not the least of which is the status of Newton’s right shoulder. It became problematic last season, limiting the 2015 league MVP from throwing more than 20 yards downfield.

When the Panthers needed to throw a Hail Mary pass, Newton was subbed out.

The 30-year-old Newton sat out the last two games of the season after the Panthers were eliminated from playoff contention. He had arthroscopic surgery in January.

When asked if there will be any restrictions on how far Newton can throw the football, Rivera said, “well, we will see.

“We believe he is ready to roll,” Rivera added. “He had a good offseason. He had a good break, from what we are told. Again, the proof is in the pudding.”

Newton’s rehab hardly is the only question the Panthers have following a 7-9 season. Personnel issues abound with several key veterans gone.

Middle linebacker Luke Kuechly said it’s strange not having them around, particularly his good buddy Davis, who spent 14 seasons with Carolina before signing this offseason with the Los Angeles Chargers.

The team drafted Brian Burns as an edge rusher to help fill the void left by Peppers, and signed free agent Matt Paradis from Denver to take Kalil’s spot. Longtime linebacker-in-waiting Shaq Thompson takes over for Davis, while the team is still looking for a nickel back to replace Munnerlyn. Free safety is another position up for grabs.

Also, the offensive line will need to mesh, with Paradis taking over at center and second-round pick Greg Little expected to start right away at left tackle.

“We have a lot of new moving parts,” Rivera said. “We lost some savvy veterans who have been around for a long time and they have moved on. So we have some guys who have to step up.”

There is also the matter of keeping Greg Olsen healthy. Olsen is the only tight end in NFL history with three straight 1,000-yard seasons, but the three-time Pro Bowler missed 16 games over the past two years after twice breaking his foot. That ended a streak of 144 straight NFL games played.

Olsen said he’s been “100 percent (healthy) for months,” adding that his training regimen has been extremely productive.

But the 12-year NFL veteran acknowledged the uncertainty that the future holds, saying “I’ve yet to find anything that prevents broken bones. So if you know of anything, let me know.”

Carolina did get one major question answered Wednesday as Burns, the team’s first-round draft pick, signed a four-year contract with a team option for a fifth season. That means all of Carolina’s draft picks will be ready to go when practice begins Thursday night.

Burns, selected No. 16 overall, was one of three NFL first-round picks who had not yet signed.