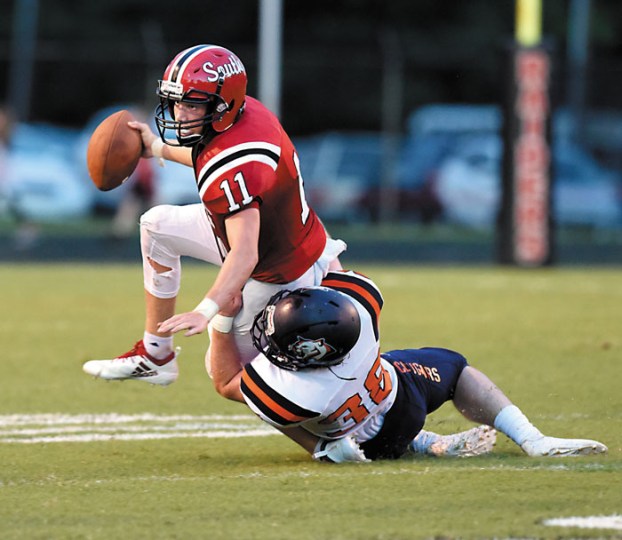 SALISBURY —And here we go again.

Due to weather concerns, high school football games frequently get moved up and occasionally get moved back.

The 2018 season was maybe the craziest in memory, with nearly as many non-Friday varsity football games as Friday games. Friday is the night on which high school games have traditionally been played and are supposed to be played, but all heck broke loose. There was at least one week when we had Wednesday games.

The scheduling adjustments have already started for 2019, with the two most anticipated games of opening night affected.  On Wednesday afternoon, South Rowan-Carson and Salisbury-North Rowan contests were moved up to tonight.

South will play at Carson at 7 p.m., a half hour earlier than usual, as it’s a school night.

Salisbury-North will still have a 7:30 p.m. kickoff, but the venue has been switched to Salisbury’s Ludwig Stadium because North is having drainage issues at Eagle Stadium. If you don’t want to battle for a parking space at SHS, you can listen to that one on the radio. It’s WSAT’s Game of the Week.

Calling South-Carson and Salisbury-North the “most anticipated” isn’t demeaning to  the West Rowan at Mooresville and East Rowan at North Stanly affairs, which will no doubt include some fine football. But county games are what they are. It’s hard to beat them as far as community interest, gate receipts and player intensity. Everyone wants bragging rights. Everyone wants to be the county champ, and if you lose the first one, it’s unlikely that you’re going to be it.

The plan this year as far the high school picks is for a panel of experts, and I’ll use the term “experts” loosely since I’ll still be part of it, to predict the games. Dennis Davidson, Scott Maddox, Marny Hendrick and David Shaw will also be offering insights as far as who might defeat whom. I’m thinking that will start next week — hopefully, with all the games being played on Friday.

Carson has experienced three straight losing seasons, while South Rowan hasn’t had a winning year since 2009. That’s nine in a row. Both teams were 3-8 in 2018.

That frustration makes this an extremely important game for new Carson coach Daniel Crosby (a former South Rowan player), as well as for fifth-year South coach Daniel Yow, who has led the Raiders to eight wins in four seasons. It would be huge for either of these program to start 1-0. One of them will.

Carson’s first-year schedule was one of the weirdest ever played in the county. Carson had to play anyone who had a schedule opening for its non-conference games, which led to the Cougars starting off with Sun Valley, Fred T. Foard, Bunker Hill and East Gaston. There was a six-week stretch that season in which Carson managed six points — that’s 1 point a week — and needless to say, the Cougars went 0-11. The schedule that year did not include South Rowan or East Rowan.

There was another 0-11 in store in 2007 for coach Mark Woody (now North Rowan’s AD), who had been entrusted with getting Carson’s program off the ground. The first Carson-South meeting occurred that season. It was Raiders 35, Cougars 7, and the rivalry was under way.

The first victory in Carson football history came in the Cougars’ opener in 2008 when they blasted North Rowan 36-0. But South Rowan made it two wins in a row in the series with the Cougars, prevailing 15-6.

In 2009, Carson (7-6) and South Rowan (9-3) were both good, the only year that statement truthfully can be made. Carson won the first playoff game in school history that year — edging Ledford — but South Rowan thumped Carson 46-21.

The tide turned in the South-Carson rivalry in 2010. Carson had the finest team in school history (10-3) and demolished the Raiders 53-16, setting off celebrations and breaking the ice in the series.

Despite the history of the series, South has advantages, including an experienced quarterback (Drew Huffman) who led the county in total offense per game last season. Huffman runs so well that he accumulated even more total yards than West Rowan passer Payne Stolsworth. South also has a defense that looked good, by all accounts, in the scrimmage with North Rowan.

On the other hand, Carson has a new everything. New offense. New defense. New head coach. New QB (Alex London, a guy I’ve known since he was the size of a football).

North Rowan started playing football in 1958 and went 0-10 that first year. But North had moved up to 9-1 by 1961 under coach Burt Barger and was embarking on considerable success as a football school.

The Cavaliers took on Boyden High for the first time in 1965 and promptly were demolished, 41-2, by a Boyden squad that went 3-7.

Coach Pete Stout arrived at Boyden in 1966, starting a long run of dominance in county games. North managed to tie Boyden in 1966 and 1970, but never beat a Stout-coached team. Boyden, of course, became known as Salisbury in 1971. Stout coached Salisbury with magnificent results through the 1975 season.

Salisbury nipped North, 2-0, in 1976 in one of the oddest games in county history. In 1977, North finally beat Salisbury for the first time under Hall of Fame coach Larry Thomason and also won in 1978 and 1979.

In the 1980s, Salisbury held a 6-4 advantage in the series. North stormed to undefeated regular seasons in 1982 and 1985 under Thomason, and both of those teams were able to edge the Hornets.

From 1989-1992, the game was played as the final one of the regular season, and the rivalry intensified.

In the 1990s, North won seven out of 10 in the series. Those were Roger Secreast-coached North teams, ahead of their time in the passing game.

Coach Pinyan arrived at Salisbury in 2003, elevating the Hornets’ fortunes with is organizational skills, but North, with the help of a 2008 forfeit win (Salisbury romped 52-8 on the field), managed a 5-5 split in the decade from 2000-09.

Salisbury thumped North annually from 2010-12, making it nine straight wins on the field for the Hornets against the Cavaliers, but momentum in the series shifted once again in 2013 when Joe Nixon’s 13-1 Cavaliers crushed Salisbury 41-0 to close the regular season.

Ben Hampton took over as North’s coach in 2015 and hasn’t lost yet to the Hornets. North’s current winning streak over Salisbury is six in a row. North won 20-7 in 2018.

Hampton is 33-17 in 50 games at the helm of the Cavaliers. Coach Brian Hinson is 14-9 in two seasons at Salisbury.

This has been a great rivalry, with lots of runs, but also some unpredictability. Salisbury’s domination in the Stout years still has the Hornets in front in the all-time series, but it’s getting tight — 27-25-2.

What happens tonight? Hard to say, even with North’s recent success.

Both teams have new quarterbacks. Both teams expect to be quite good. North is in everyone’s preseason 1A poll.

North also has running back Malcolm Wilson, the county’s reigning offensive player of the year, and some star power on defense with athletes such as Jordan Goodine, Zay Davis and Jaharion Graham. Salisbury was awfully young last year, but has one of the county’s rising stars in Jalon Walker and a dangerous offensive player in Mike McLean. Hopefully, everyone came out of last week’s scrimmage healthy and will stay that way tonight.

A.L. Brown’s new turf field is being installed. Coach Mike Newsome’s Wonders will be ready to go next week at Memorial Stadium against Ashbrook.

Here’s hoping that next week everyone can play on Friday.