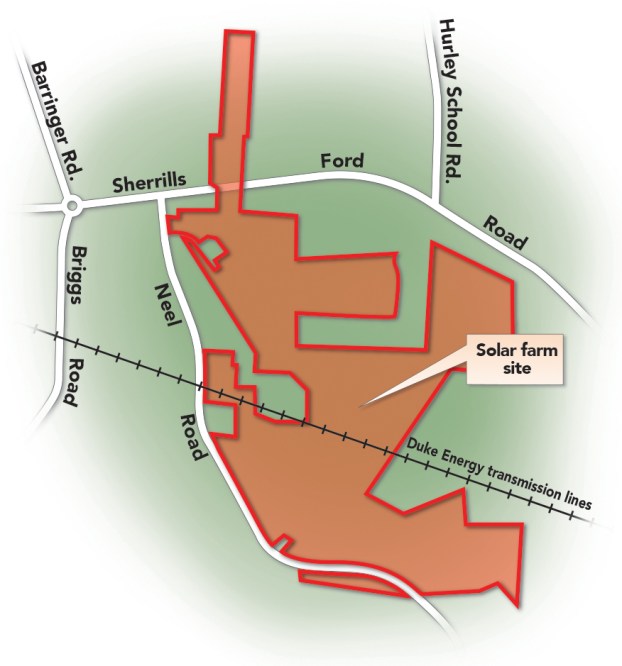 Whatever the decision, Rowan County commissioners can’t be accused of not questioning all aspects of a 400-acre solar farm proposal in western Rowan County.

During a meeting Monday, Rowan County commissioners scrutinized all aspects of a proposal that would place a solar farm along Sherrill’s Ford and Neel roads, including raising the specter that some of the statements made by those testifying weren’t valid.

Had a Realtor for the project, Richard Kirkland, been to the site rather than just using a computer, Commissioners Vice Chair Jim Greene asked. Had Kirkland spoken with local realtors for their thoughts on the project, Greene continued.

Commissioners Chairman Greg Edds asked, “You’ve said you’ve done 600 solar farm studies. Have you in any case of those 600 said that this would damage (property values)?”

Exactly how much screening would be required to truly ensure that people wouldn’t trade a view of a forested tract of land for a large solar farm, Commissioner Craig Pierce asked.

And those were just three of the questions asked by commissioners during the hours of discussion.

Developers of the solar farm have stressed they want to be good neighbors, and they appear to have worked hard to fulfill that promise. Commissioners, however, have a duty to voters, taxpayers and residents of Rowan County to ask tough questions even when developers mean well.

And, while a four-hour meeting on Monday was disappointing in that only a few members of the public were able to speak, it was simultaneously encouraging that commissioners came armed with good questions. They should return in October, when consideration of the solar farm will continue, with more questions. Importantly, they must also ensure members of the public have an equal or greater amount of time to ask their questions and give their feedback on the project. Developers should return ready to take notes.

Solar farms are good investments in our energy and economic future, but that doesn’t mean they should be immune to scrutiny.

By D.G. Martin “You shouldn’t be so worried about the transition in the barbecue world.” Jim Auchmutey was trying to... read more