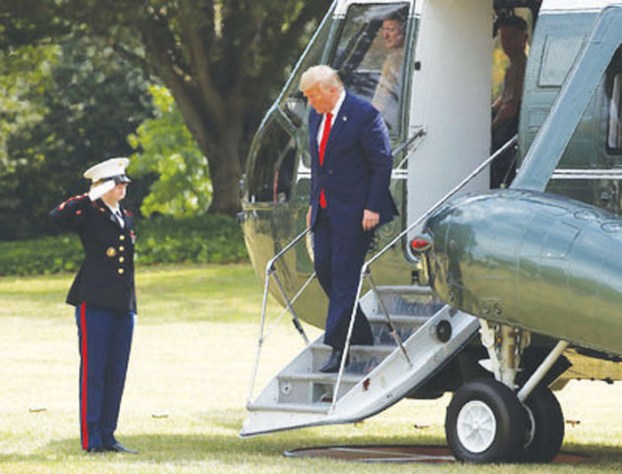 President Donald Trump steps off of Marine One as he arrives at the White House after attending the United Nations General Assembly on September 26, 2019 in Washington, DC. Earlier that day the Acting Director of National Intelligence Joseph Maguire testified before the House Intelligence Committee about a whistleblower complaint reportedly based on U.S. President Donald Trump pressuring Ukraine President Volodymyr Zelensky to investigate leading Democrats as a favor to him during a recent phone conversation. Getty Images North America

Only the ball bearings were missing.

The reference, for those who don’t know, is to Humphrey Bogart’s performance as the emotionally unstable Capt. Queeg in the 1954 film “The Caine Mutiny.” In a pivotal scene, Bogart vividly etches the captain’s mental disintegration, rambling on the witness stand about strawberries and tow lines and the supposed lies of his subordinates. All the while he toys, ceaselessly, unconsciously obsessively, with a handful of ball bearings.

The scene is called to mind by Donald Trump’s Wednesday news conference at the United Nations. It was supposed to be a summation of his trip to the world body, but the encounter was dominated by the scandal that has subsumed his presidency and reignited impeachment talk in Congress.

Trump denied having done what he is accused of, i.e., pressuring Ukrainian President Volodymyr Zelensky in a July telephone call to launch an unfounded investigation into a political rival, Democratic presidential candidate Joe Biden, and Biden’s son Hunter. Notes from the conversation, released Wednesday, make clear how much credence should be afforded Trump’s protestations of innocence. Which is to say, none.

Even worse were Thursday’s charges that White House officials, at the direction of White House lawyers, attempted to bury the incriminating notes in a computer system meant for the preservation of top-secret material, rather than placing them in the system where such documents ordinarily are stored. The word for that is “cover-up” and it indicates, by definition, an awareness of guilt.

Perhaps it was that awareness — or, more likely, just the fear that he was finally caught — that accounted for Trump’s Wednesday performance. Whatever it was, he made Capt. Queeg look like Capt. Kirk, rambling on with no energy and less conviction about his innocence, his mistreatment by the media, his unappreciated greatness.

There were the usual insults, the usual complaints, the usual grandiose claims, resentments, non sequiturs, deflections and wild accusations. But his demeanor was that of an oldies band stumbling through its greatest hits. It was painful to watch, palpably pathetic. You wanted to turn away, and you could not.

One had a sense that maybe the cat had run out of lives, that a man who has, in a political sense, escaped more death traps than Indiana Jones had finally pushed his luck too far. It called to mind a Motown refrain. “Nowhere to run to, baby. Nowhere to hide.”

And you could only think to yourself: For this? Really?

For this, 63 million American voters deluded themselves?

For this, right-wing pundits prostituted their credibility?

For this, Republicans debased their honor?

Sadly, yes. As a result, we contend with an unbridled corruption — not just in the sense of illegal behavior, but also in the sense of decay and decomposition. We are a nation rotting from within. And finally, finally, maybe, we’ve had enough. Finally, finally, maybe this attempt to induce a foreign power to meddle in an American election is the bridge too far, the Rubicon crossed, the straw that broke the donkey’s back. Maybe — dare we hope? — the elephant’s too.

“Impeachment for that?” scoffed Trump on Wednesday. And no, one would not have been surprised to see him pull out the ball bearings.

It’s not just the country that’s rotting from within.

Leonard Pitts is a columnist for The Miami Herald. Readers may contact him at lpitts@miamiherald.com.

Japan News-Yomiuri At the annual U.N. General Assembly gathering of world leaders, a spotlight was once again focused on the... read more