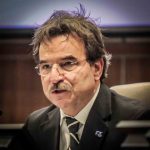 CONCORD — With a driver’s license serving as the most compelling piece of evidence for some of its members, the Cabarrus County Board of Elections on Monday dismissed a complaint that Darrell Jackson does not live in the Kannapolis city limits.

The vote to dismiss the complaint was unanimous. As a result, Jackson will be able to continue his candidacy for the Kannapolis City Council.

Jackson, who served on the board from 2013 to 2017, is one of seven candidates seeking three seats on the board. But the address to which he’s registered to vote — 201 S. Ridge Ave. — had drawn scrutiny from Oddy Crist, who lives on East D Street. In her complaint, Crist alleged that Jackson primarily lives at 609 Waters Road in Rowan County.

Near the start of the meeting, Crist admitted that she had listed an incorrect address in her complaint, amending her allegation to say Jackson lives at 690 Waters Road, a property that he has owned for decades.

Crist told the Board of Elections that she never intended her questions about Jackson’s residency to get to Monday’s formal hearing and that the complaint was not politically motivated. Crist said she has told people to check out candidates before they vote and decided recently that “maybe I should take my own advice.” Crist said she does not want to be accused of failing to ask questions.

But John M. Lewis, an attorney representing Jackson, said the hearing appeared to be political in nature, citing statements by Crist that Jackson had not attended local Republican precinct meetings as well as the timing of the hearing — one day before Election Day.

The hearing was “politically motivated to undermine his candidacy,” Lewis told the board. The challenge to his residency could have been filed at an earlier date, he said.

During the roughly two-hour hearing, Crist said her primary evidence was a state statute saying that one person cannot have two residences. At her request, the Board of Elections required Jackson to produce a number of documents, but Crist said she didn’t have time to review them fully and that the process of the hearing was compressed and rushed.

Crist said she simply wanted someone on the Kannapolis City Council that lives inside the city limits.

“My intentions have been above board as a voter,” she said.

At one point, Lewis attempted to have the complaint dismissed, saying Crist had not provided enough evidence to raise doubts about Jackson’s residency, but the board pressed on.

Lewis provided evidence that included a lease for Jackson for the 201 S. Ridge Ave. property signed in March, statements from Jackson’s landlord, notifications to doctors of an address change and, most important for some members of the Board of Elections, a copy of his driver’s license with the same address at which he’s registered to vote.

Jackson’s driver’s license with the new address was issued Sept. 26.

That was good enough for Board of Elections member Lanny Lancaster, who said it was compelling evidence because it was issued more than a month before Crist’s complaint was filed.

“I don’t see where we would have a stance to remove him at this point,” Lancaster said. “It looks like, to me, he made an effort to correct all the issues.”

If the protest had been filed earlier, Lancaster said, the outcome may have been different.

Testifying during Monday’s hearing, Jackson confirmed he purchased the property on Waters Road years ago. Now, it’s an investment and part of his retirement savings, as he paid just $150,000 to build a lakefront house in the 1980s. Jackson said that while he lived there for a time in 2018, he plans to sell it eventually.

“Anybody who owns lake property knows they are not making any more of it,” Jackson said. “I’ve held onto it as part of my retirement. I’m 67 years old. My mother is 90 and still works for me. … I can’t retire before she does.”

Prior to 2018 and while he served on the Kannapolis City Council, Jackson lived elsewhere on South Ridge Avenue. He was registered to vote in Rowan County with a Waters Road address for a time before 2013, according to the Rowan County Board of Elections Office.

Jackson told the board Monday that he moved back to Waters Road temporarily in 2018 because he couldn’t afford the Kannapolis apartment while his downtown business — Lee Clothing Warehouse — was seeing a downturn in customers as a result of construction work and closed streets in the area.

Jackson also told the board he moved back to Kannapolis in March primarily because he needed a place that was close to work.

“I’m (at work) seven days per week,” Jackson said. “I leave early in the morning and leave late at night. I chose that property because of my involvement with the city. … I have to be there. I am as much of a Kannapolis citizen as anybody.”

Lewis would later note that Jackson only needed to establish residency in the city 30 days before the election and that Jackson had done that.

The move was not motivated by a desire to run for office again, Jackson said. And Jackson said he would like to be one of the first people to purchase a condo in downtown Kannapolis.

After Monday’s hearing, Jackson issued a statement saying, “It’s too bad this question of whether or not I really am a Kannapolis resident was brought up this late in the game, without a full understanding of the situation.”

Jackson said the hearing was a distraction from what had otherwise been a campaign focused on helping bring experienced leadership to the City Council at a critical time.

“For over 30 years, I’ve run my business in downtown Kannapolis, and over the years, as I’ve lived in Kannapolis and surrounding communities, I have gotten to know many residents and business people,” Jackson said. “If I’m elected to the Kannapolis City Council, I’ll work hard to represent the people and businesses there. And I’ll do so just as I am now and have been, as a resident of Kannapolis.”

Dorland Abernathy, a former Landis alderman and candidate for mayor, announced Friday that he is endorsing one of his challengers,... read more