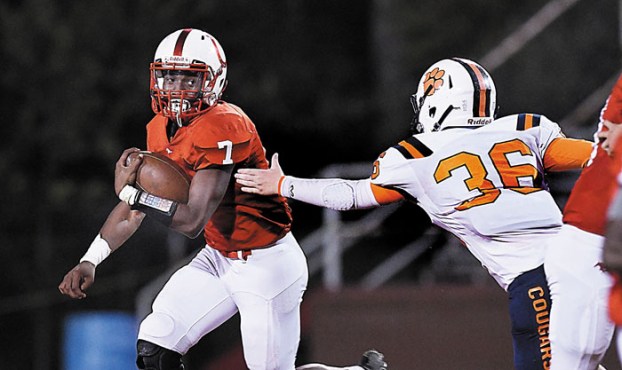 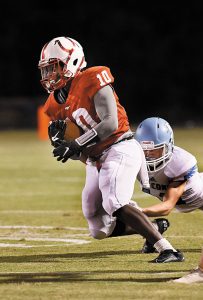 GRANITE QUARRY — It was a contest that was over almost as soon as it started.

Just four minutes into the game, East Rowan was up, 14-0, and the rout was on. The Mustangs celebrated Senior Night with a 49-0 thrashing of North Iredell here Friday night.

The Mustangs gashed the visiting Raiders for one big play after another in the first half for a 42-0 lead and closed out the regular season in impressive fashion.

Three East runners scored two touchdowns each in the rout, led by sophomore Sammy Pinckney with 209 yards. Junior Vincent Jones only carried the ball three times out of the wildcat formation, but two of them went for scoring jaunts of 60 and 69 yards. Senior Isa’ah Cauthen only carried the ball twice but both went for touchdown runs of 47 and nine yards.

The win ended a roller coaster regular season for the Mustangs (5-6, 2-3 North Piedmont Conference) on a high note, while the visiting Raiders (0-11, 0-5) concluded a frustrating campaign.

East head coach John Fitz certainly liked what his explosive offense produced, but was equally impressed with the defense. “We played really solid on defense and we didn’t give them an opportunity to get anything going,” Fitz said. “That has kind of been our problem all season, giving up the big play, but we didn’t give up any tonight.”

In truth, the Mustangs’ defense didn’t give up much of anything, holding North Iredell to just 73 yards of total offense. East stopped the Raiders twice on downs, snagged a pair of interceptions (by Cauthen and Tahj Young) and only allowed one true scoring threat by the visitors. On special teams, East notched a blocked field goal by Young and a blocked punt by Cauthen.

“It was senior night, so we approached it like we would any other game,” said senior Cauthen, after a stellar night on both sides of the ball. “We were making sure we executed on all downs. I was just playing with my heart, since it’s probably going to be my last game here.”

Cauthen’s night included the two touchdown runs, the interception, the blocked punt and a two-point conversion run for good measure. Not a bad final effort.

For the past month, with an injury to quarterback Logan Forbis, the Mustangs have employed a wildcat offensive attack with Pinckney and Jones taking the direct snaps with a great deal of success. Forbis, a senior, made a return for his final game last night but the Mustangs stuck with the wildcat right out of the gate and it paid off in a big way.

Two plays into the game, Jones took the snap and broke through a gap on the left side for a 60-yard touchdown romp. The extra point was blocked, but the setback was temporary.

North Iredell quarterback Hunter Nicholson tried a pass on his first play and Cauthen intercepted at the Raiders’ 40. Four plays later, Pinckney went around the right side for the score from the 7-yard line. Cauthen ran in the two point conversion. Just four minutes into the game, East was up, 14-0, and on a roll.

After a punt, East struck again quickly as Jones broke 69 yards for a 21-0 lead, as the first quarter came to a close.

“The way we block and the way we execute made it work,” said Jones, a junior runner and wide receiver, “I am getting better at reading the holes and that is how I was able to break those two long runs tonight.”

Jones had three carries for 128 yards and he two scores, giving him 593 rushing yards for the season, mostly in the past four games out of the wildcat.

The offensive star for the Mustangs, as he has been all season, was Pinckney, who racked up 209 yards on 19 carries to go with his two scores. He wrapped up the dominating first half with a sweep around right end for an 80-yard scoring jaunt, making the score 42-0. The effort Friday night gave him a county-leading 1,830 rushing yards. He also has 15 touchdowns.

“Yes, I am glad to have Sammy coming back,” Fitz said, “Really, we have a lot of good players coming back for next season.”

With a running clock throughout the second half due to the wide margin, the contest wrapped up in an hour and 45 minutes. The only score in the second half came midway in the third period when Cauthen’s blocked punt set the Mustangs up at the Raiders’ 10. Junior running back Jaden Thompson punched it in from four yards out, making the score 49-0.

Although it is an unlikely scenario, Fitz feels like his Mustangs have an outside chance to snag a 3A playoff berth, “We have 5 wins and I have seen teams get in with three or four wins in the past,” Fitz said. “It all depends on how it all falls tomorrow.”

The NCHSAA will release playoff match-ups in all four classifications Saturday afternoon. The six-team NPC is only assured two spots which will go to league champion Statesville and West Rowan. All the remaining teams, including the Mustangs, can only hope for a wild card spot, based on Max Preps rankings.

NOTES: A unique aspect of senior night at East was the appearance of senior offensive lineman Dylan Goodnight with the Mustang band for the pre-game national anthem. The 265-pound lineman took the field with the band in his football uniform and a trombone to perform with his band mates. “It was really special,” said Goodnight, who is a regular member of the band when he is not opening holes for the offense. “Me and our band director. Mrs. McNeil, have been talking for a couple of years to try and get me into a halftime show,” Goodnight said. “But, it just never worked out. Then she asked me this week if I wanted to play on senior night and I am glad we were able to do it.”

By Brian Pitts For the Salisbury Post MOCKSVILLE — Davie County, after facing the real possibility of tumbling from first place... read more