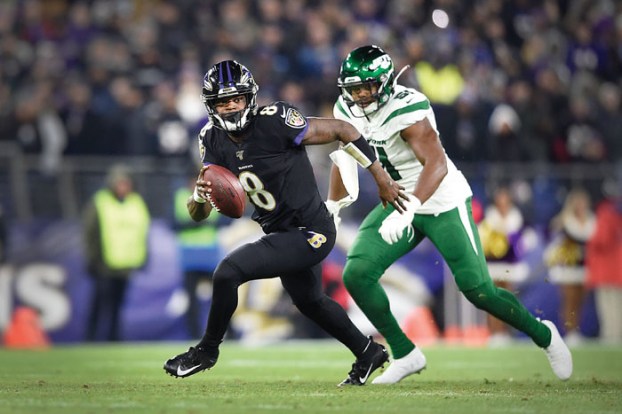 File-This Dec. 12, 2019, file photo shows Baltimore Ravens quarterback Lamar Jackson running during the first half of an NFL football game in Baltimore. No matter how many spectacular plays Jackson and Russell Wilson made, officiating overshadowed the NFL this season. (AP Photo/Gail Burton, File)

Young QBs get plenty of opportunities in NFL

From Super Bowl contenders to teams in full rebuilding mode, from injury-riddled ones to those trying to become champions.

Teams at almost every stage of the building process in the NFL have been willing to turn over their play-calling to inexperienced quarterbacks.

A record 287 games were started by quarterbacks who haven’t yet celebrated their 27th birthday, with 20 QBs in their first three years in the NFL starting games this season.

That included three rookies who all threw for at least 20 touchdowns: Daniel Jones of the Giants, Jacksonville’s Gardner Minshew and Arizona’s Kyler Murray.

This was just the second time in NFL history that three rookies did that, joining the 2012 trio of Robert Griffin III, Andrew Luck and Russell Wilson.

Here’s a breakdown of the 20 quarterbacks with three years of experience or less who started games this season:

Mahomes won the MVP in his second year in the league for Kansas City in 2018 and Jackson could accomplish that feat this season after leading Baltimore to the NFL’s best record at 14-2.

Jackson set a record for quarterbacks with 1,206 yards rushing and also proved he’s equally dangerous as a passer by throwing for 3,127 yards and 36 TDs. His QB rating of 113.3 ranked third best in the league.

Mahomes took a little step back while dealing with knee and ankle injuries that sidelined him for two games. He dropped from 50 TD passes in his first full season as a starter to 26 this year but still threw for more than 4,000 yards in only 14 games and helped the Chiefs win the AFC West and earn a first-round bye for the second straight season.

Watson is only slightly behind those two after leading Houston to the playoffs for a second straight season. He had 26 TD passes, seven touchdown runs and dozens of plays worthy of the highlight reels.

Murray lived up to his No. 1 draft pick billing by joining Cam Newton as the only rookies to throw for at least 3,500 yards and run for 500 or more. He helped spark an Arizona offense that was one of the league’s worst in 2018 with his dual-threat ability and only needs to cut down on the rookie mistakes to move into the star category in the next couple of years.

Allen took a big step forward in his second year with Buffalo and was a big reason why the Bills made the playoffs for just the second time this century. He doubled his TD passes to 20 and increased his passer rating from 67.9 as a rookie to 85.3 this year thanks to improved accuracy. He still tends to miss on too many throws and needs to get more proficient with the deep pass, which was expected to be a strength thanks to his strong arm. Allen also is a rushing threat, with 510 yards and nine TDs on the ground.

These four rookies all showed flashes this season but need to improve their consistency if they expect to lift their team into contender status.

The Giants were questioned for taking Jones sixth overall, with many critics considering the pick a bit of a reach. But Jones showed signs of why the Giants were so high on him with three games that featured at least four touchdown passes and no interceptions. But he threw for only 11 TDs in his other nine starts and finished tied for the second most turnovers in the league (23) thanks in large part to poor ball security in the pocket that led to 11 lost fumbles.

Haskins was the third quarterback taken in the draft when he went 15th overall to Washington. He dealt with a coach firing when Jay Gruden lost his job in October and didn’t start a game until November. But he showed growth in the second half of the season and finished his rookie year with two strong starts that featured four TD passes and no interceptions.

A thumb injury derailed Lock’s rookie season after he was drafted in the second round by Denver. But he returned to make five late-season starts, winning four of them, and was already named the 2020 starter by GM John Elway.

Minshew was a bit of a surprise after being a sixth-round pick in Jacksonville. But he was thrust into action early when Nick Foles got hurt in the opener and showed himself to be more than capable with play-making ability that helps overcome his lack of arm strength. Whether that’s enough to be a long-term answer for the Jaguars is an open question.

RUNNING OUT OF TIME

The Bears traded up to draft Trubisky second overall in 2017 with both Mahomes and Watson still on the board. Trubisky showed some progress in his second season before regressing this year, with significant drops in nearly every major statistical category. Chicago remains publicly committed to Trubisky for now but how long that lasts if the struggles continue remains to be seen.

Mayfield followed up an impressive rookie season as the No. 1 overall pick with an extremely disappointing one. He had the second most interceptions in the league with 21 and had the second worst passer rating among qualifying quarterbacks. That performance contributed to the decision to fire coach Freddie Kitchens. But if Mayfield doesn’t improve under a new coach, he could be the next to go.

The Jets were hoping Darnold would take a big leap in Year 2 after being drafted third overall. Instead, he made only incremental improvements after dealing with an early season bout with mononucleosis. He’ll get another season under coach Adam Gase to show progress before the Jets need to make a decision about his long-term status.

Rosen hasn’t really gotten a great shot yet after being drafted 10th overall by Arizona in 2018. He struggled in 13 starts for the offensively inept Cardinals as a rookie, was traded to Miami after Murray was picked first and got only three starts for the rebuilding Dolphins. His next step is unknown with Miami likely to draft a QB with one of its three first-round picks.

The players in this last group all got chances to start this year but don’t appear to be the long-term answers anywhere yet. Whether they get legitimate chances to prove themselves as starters down the road remains to be seen.

Think you know 2020? Some sports predictions

By Tim Dahlberg AP Sports Columnist Predictions aren’t for the faint of heart, as anyone who has ever given money... read more