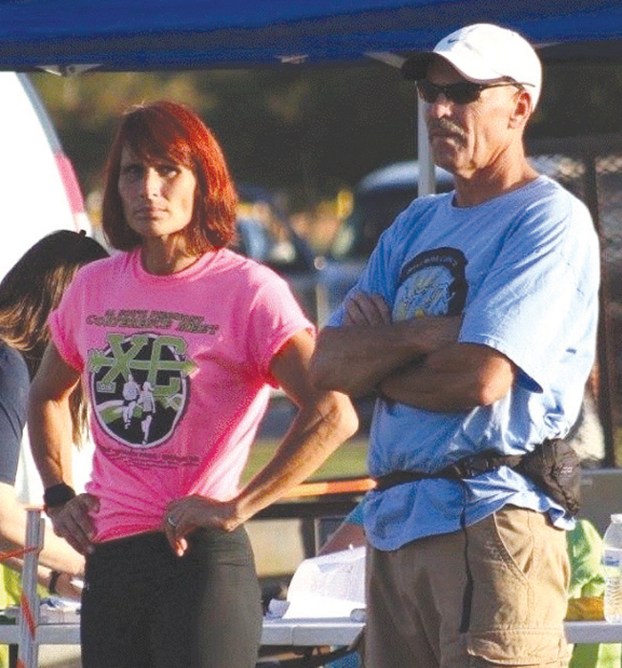 Once a Warrior, always a Warrior!

I can’t begin to remember the first time I met Kevin and Ester Marsh. It seems like they have always been close friends. They were also very special to a generation of running kids in Rowan County.
With an exceptionally talented running son, Kevin and Ester helped with another program when Andrew got involved. They decided in 2011 to start the YMCA Warriors, offering cross country and track competition. Kevin said, “Ester and I knew that we could partner with the Y to have a terrific running program.” The long story is that the couple invested a huge amount of time to help these kids, up to 900 hours annually.

Rowan County doesn’t have middle school cross country and track but most of the surrounding counties do. Kevin and Ester worked with over 50 kids, many as young as 9 and 10. Most continued to participate in the program until high school and often remained afterwards.
While Kevin handled most of the running, Ester was the catalyst for starting the Warriors and she handled all the team entries and memberships, plus the YMCA requirements for their programs. Ester also coached the high jump, long jump, hurdles and sprints. Kevin said, “Ester was truly a force for our team!”

Kevin continued, “The Warriors always had many kids qualify for the Junior Olympics, an accomplishment in itself, and we also had at least one All-American (top eight in age group) in every Junior Olympics we competed in for nine years.”
Both Kevin and Ester had to balance all the time invested in coaching with hectic jobs. Kevin works for the Carolina Restaurant Group as service manager and Ester is fitness director at the Hurley YMCA. Summer track season is the longest with meets lasting all day on Saturday and even Sundays at the State and Regionals levels. Kevin said, “So probably about 30 hours a week and 20 hours a week for cross country. That’s 900 hours annually included planning workouts and other training.”

Still the rewards were great. Kevin said, “My most special memories are of Andrew winning the 2000m Steeplechase and being National Champion and our 10 and under boys cross country team winning the Footlocker Regional at McAlpine Park.” Members of that boys’ team included Eli Julian, Matthew Burroughs, Connor Price, Bret Lewis and Nate Shaffer. We also had a 9-10 year old team in 2015 AAU Junior Olympic Cross Country Championship in Alabama that finished second in the country, only seven points out of first place. Julian and Price were joined by Triston Rabon, Jake Swicegood and Grayson Steedley. I am very proud of both these teams because the total team finish embodies what makes cross country such a great sport.”

Current Rowan County High School Champions, Adalie Harrison and Noah Julian, are former Warriors.
All good things come to an end. Kevin said, “Mainly we decided to step away after the 2019 season due to our jobs. I am traveling more than ever for several days a week. With the Rowan/Cabarrus YMCA merger, Ester has a much bigger time commitment with the fitness department. The other consideration was our core group of boys that started as 8-9 year olds will move into high school next school year. My commitment was to keep coaching until they reached that level.”

With their well-deserved free time, Ester and Kevin plan to do trail riding in some new places and travel more since they won’t have to use vacation time for the Junior Olympics and Cross- Country Nationals. They plan to stay close to the running scene in Rowan County. Kevin has seven marathons and Ester has completed a half marathon and multiple triathlons.
Kevin continued, “When Ester and I decided to start the Warriors, our main goal was to instill a love of running in our kids that hopefully would carry on into adulthood. That is why we mainly focused on personal bests at each meet instead of finishing place. We are most proud of how many of our athletes went on to become accomplished runners in high school and we try to get to as many of their meets as possible. We always say ‘Once a Warrior always a Warrior’. I’m sure many people at cross country meets wonder why we’re cheering for kids from so many different schools, but we will always support our former athletes. It has been truly a labor of love!”

As I stood in the funeral home, it seemed the stories all centered around what she had done for others... read more