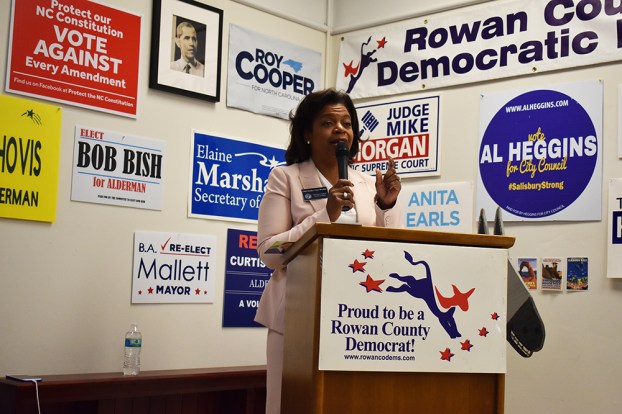 The first African-American woman to serve as chief justice on the North Carolina Supreme Court visited the county in October for a celebration of the court’s 200-year anniversary. The court plans to hold court in about 22 counties in three years.

As the leader of the state Supreme Court, Beasley said, things look a lot different than when it started.

“You can also very well imagine that the court today is not the court it was 200 years ago,” she said. “We have come a long way, thankfully.”

Beasley said the focus of the North Carolina Supreme Court is to revamp technology to allow more people to access files without having to go to their local courthouse, which will help rural communities, she said.

Beasley said she also wants to increase the number of drug treatment courts. Currently, there are 23 courts in the state, but she would like to see one in every county.

“The reality is we have been in crisis for some time,” Beasley said. “There are folks that are around us in our families and communities that do have substance abuse issues. We believe the court system ought to be a part of solution making for those families.”

The court, she said, is also creating faith and justice alliances to train clergy to be able to help with legal issues. One of the court’s tasks will be addressing the roughly 1 million people in the state who are driving with their licenses revoked.

Beasley said those licenses are revoked because people were fined and couldn’t pay it, not necessarily because they committed a crime. Fines snowballed and then licenses can get suspended for 10-15 years.

Driver’s license restoration clinics can be brought into places of worship as a solution, she said. A partnership can also inform those who are charged with a crime but not convicted that they are eligible for an expungement.

Beasley on Saturday recognized Rowan County’s involvement in school justice partnerships. She reminded attendees that “raise the age” was put into effect at the end of 2019, which means the majority of cases with people under the age of 18 will be handled in juvenile court.

“We know what it’s like and know what the future of young people will be if they get a blip on their record and that blip follows them for the rest of their lives,” Beasley said.

Beasley said law enforcement officers in school are mentors for students in addition to being responsible for safety. Officers may be able to understand why young people are getting in trouble and what can be done.

Beasley, who has been on the N.C. Supreme Court since 2012, is up for election on Nov. 3. She was appointed by Gov. Roy Cooper last March to serve as chief justice.

The November ballot, will be the first time the justice candidates will have a party affiliation next to their names. Beasley is a registered Democrat.

Regardless of the party, she said, judges should be fair, impartial and apply the law.

“I know it’s important to be fair because I am making decisions about people’s lives,” she said.

She said the court, made up of six Democrats and one Republican, is unanimous in about 87-90% of their decisions.

The court affects every day North Carolinians, she said.

School board to discuss future of Knox-Overton Monday

By Carl Blankenship carl.blankenship@salisburypost.com SALISBURY — Discussions about the future of Knox Middle and Overton Elementary schools will continue on... read more