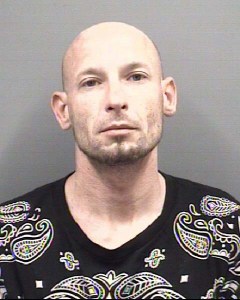 SALISBURY — The Rowan County Sheriff’s Office says a Cooleemee man allegedly racked up over $600 in charges on a company credit card, some of which was used to renovate his camper bathroom. He now faces identity theft and other related financial charges.

Deputies were contacted on Dec. 27, 2019, by William Coleman of Carolina Construction Services who said an employee used the company credit card without authorization on transactions that were not work-related. Coleman told deputies he received a statement from Wells Fargo that showed purchases at area gas stations, Lowe’s and Walmart. He also told the deputies Kenneth Powell had access to the card, which was left in the company truck, said Capt. John Sifford.

A detective spoke with Coleman who said the company has an open account with the Woodleaf BP for gas purchases that he pays every two weeks. The detective confirmed a total of $694.96 worth of unauthorized purchases were made with the card.

Sifford said according to investigators, Powell used the items bought at the hardware store to renovate the bathroom inside his camper.

On Dec. 13, purchases totaling $69.25 were made at a Walmart in Mocksville. The detective was able to obtain surveillance video from the store that showed Powell buying items. On Dec. 19, surveillance video shows Powell buying $50 in gas at a Sheetz in Mocksville and again at the same store the next day where he purchased $40 in gas and $9.90 in cigarettes and food items.

The department report shows transactions at a number of other stores, including the Discount Mini Mart in Woodleaf, the D&D Xpress store in Woodleaf, Dollar General in Cooleemee, Ruscho No. 8 in Mocksville and the Circle K/Shell also in Mocksville.

Powell was arrested on Monday and remains in the Rowan County jail under an $11,000 secured bond.