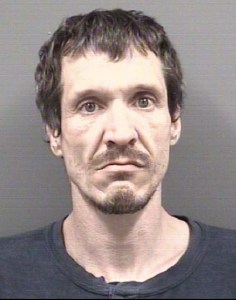 SALISBURY —  A Salisbury man faces felony drug and weapons charges after Rowan Sheriff’s deputies and probation officers went to a location to serve a search warrant for his arrest.

The Rowan County Sheriff’s Office charged David Galloway, 43, of the 200 block of Cindy Road, with possession of a firearm by a felon and possession of methamphetamine. He has since been released from the Rowan County Detention Center under a $20,000 secured bond, of which half is for being an absconder.

Deputies accompanied probation officers on at 2:10 p.m. on Friday to the 1300 block of Henderson Grove Church Road. They knew Galloway would be at that address, according to Sheriff’s Capt. John Sifford.

When they found Galloway, he had a Smith & Wesson .22 caliber revolver in his front pocket. Upon searching him further, an officer located a black plastic bag in a watch pocket of his blue jeans. The bag contained a half an ounce of a clear crystal-like substance that Galloway admitted was methamphetamine, Sifford said.

Galloway told officers he borrowed the gun from a friend as protection for when he slept outdoors. Galloway said he did not tell the friend he was a felon and couldn’t possess a gun.

By Shavonne Walker shavonne.walker@salisburypost.com SALISBURY — A Winston-Salem man remains in the Rowan County jail after causing a ruckus at... read more