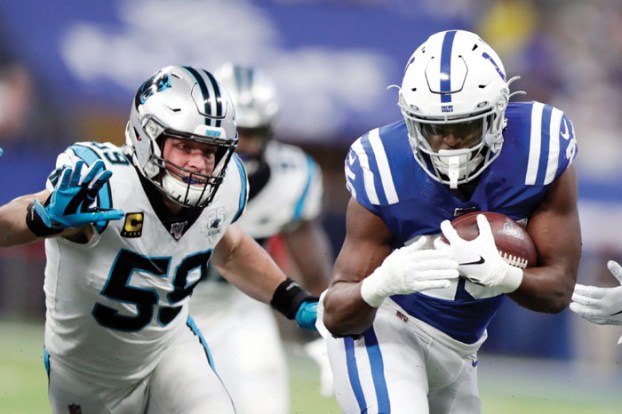 Surprising news from one of Panthers' best 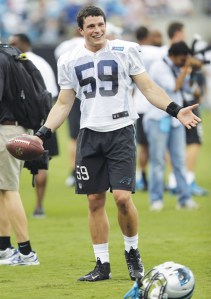 AP File photo …
In a file photo from July 25, 2014, Carolina Panthers’ Luke Kuechly jokes with a teammate during an NFL practice at the team’s Fan Fest in Charlotte. Kuechly announced his retirement on Tuesday night, in a video message from Charlotte.

By STEVE REED AP Sports Writer
CHARLOTTE (AP) — Carolina Panthers linebacker Luke Kuechly is retiring from the NFL after eight seasons.
The 28-year-old Kuechly made the surprising announcement Tuesday night in a video posted on the team’s website. He said, “I think now is the right chance to move on.”
Kuechly was selected to seven Pro Bowls and was a first-team All-Pro five times. However, he suffered three concussions during his career, which may have led to his decision.
On Nov. 17, 2016, Kuechly suffered a concussion after colliding with a Saints player. He left the game on a cart crying uncontrollably, a striking moment that shook the Panthers organization and players around the league and highlighted the NFL’s ongoing problem with brain injuries.
Kuechly fought back tears at times during his announcement. He did not specifically mention concussions but referenced the ongoing toll of the game on his body.
“It makes me sad because I love playing this game,” Kuechly said. “I’ve played it since I was a kid. It’s my favorite thing to do in the world. The memories I have from this place and this organization and being on the field with these guys, they will never go away. … There’s only one way to play this game since I was a little kid — play fast, play physical and play strong. At this point, I don’t know if I am able to do that anymore, and that’s the part that is the most difficult.
“I still want to play, but I don’t think it’s the right decision.”
Kuechly finishes his career with 1,092 tackles, which is the most by any player since coming into the league in 2012 as a first round pick out of Boston College.
Kuechly helped the Panthers win three NFC South titles and reach the Super Bowl after the 2015 season.
“While I wish we could have him for many more years, he has done everything the right way and we respect the decision he has made,” Panthers owner David Tepper said. “Luke is a once-in-a-generation player and someone we want every member of this organization to emulate.”
Kuechly said after the troubling 2016 injury that he wasn’t concerned about concussions affecting his future. He suffered a third concussion in 2017.
The Panthers tweeted a tribute to Kuechly, calling him the “the face, the heart and the soul of our defense.” He was one of the most beloved players in franchise history, and his No. 59 jersey is a fixture among fans on game days.
“Beyond his extraordinary performance on the field Luke has had a tremendous impact on this organization,” Tepper said. “In my two seasons with Luke I quickly recognized how special of a person he is. The respect he gives and garners from others as well as the positive impact he has on his peers is second to none. It’s obviously going to be very difficult for all of us because we know that no player can replace what he’s been for this organization for the last eight years. His presence can’t be replicated.”
Kuechly was selected to the Pro Bowl this season but has already pulled out of the game.
He said he hopes to remain a part of the organization.
Kuechly’s longtime teammate and close friend Thomas Davis posted on Twitter: “I couldn’t be more proud to call you my brother. Congrats on a heck of a career. The game will miss you as much as you miss the game bro.”
Former Panthers and current Redskins coach Ron Rivera weighed in on Twitter, saying he “had the privilege of playing next to HOF linebacker Mike Singletary and coaching HOF Brian Urlacher and Luke Kuechly is worthy of that honor someday.”
___
More AP NFL: https://apnews.com/NFL and https://twitter.com/AP_NFL