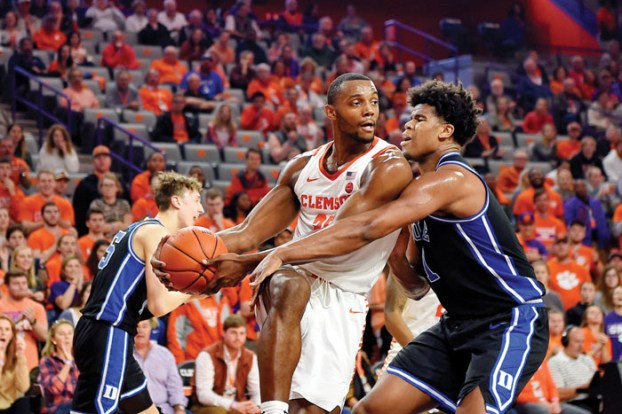 Tigers follow up win at Carolina with victory over Blue Devils 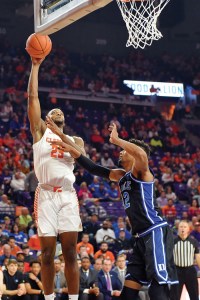 CLEMSON, S.C. (AP) — Clemson gave its weary fans something to celebrate a night after losing the national championship game in football, getting a career-high 25 points from Aamir Simms in a 79-72 upset of No. 3 Duke on Tuesday night.

It was the highest-profile upset for the Tigers since beating No. 1 North Carolina on their home court in February 2001. And just like that day, students rushed the court at Littlejohn Coliseum.

The Blue Devils (15-2, 5-1 Atlantic Coast Conference) came into the game a 10 1/2-point favorite and leading the nation with an average margin of victory of 21.5 points. Duke had not lost since a stunning home defeat to Stephen F. Austin in November.

The Tigers completed one of the rarest of ACC doubles. They beat North Carolina in Chapel Hill for the first time in program history Saturday, ending a 59-game losing streak on the Tar Heels’ home court.

“I’m so proud of my teammates and I love my school,” Simms said. “Everybody on our team came out to play tonight. That was coach’s game plan. We were going to try to rotate a lot of guys. Everybody was ready to play. We’re just all excited.”

Clemson (9-7, 3-3) has now beaten North Carolina and Duke in back-to-back games twice. The other time came in 1990, when the Tigers won their only regular-season title in 67 ACC seasons.

Less than 24 hours earlier, The Tigers’ football team fell short in its bid for a third national championship in five seasons, losing 42-25 to LSU in the College Football Playoff championship game at the Superdome in New Orleans. No one expects the Tigers to make a run to the title in basketball, but for one night, they showed they could thump one of the country’s best teams.

Like they did Saturday at North Carolina, Simms and Tevin Mack dominated the second half for the Tigers.

Clemson led 40-33 at halftime and stretched the lead to nine points before Duke rallied. The Blue Devils got back into the game despite having Cassius Stanley on the bench with four fouls just barely three minutes into the second half.

That’s when Clemson took control with a 14-3 run, including eight points from Simms. His three-point play made it 73-65 with 2:16 remaining.

Mack scored 22 points on 10-of-14 shooting. Simms was 10 of 15 from the field and had nine rebounds and five assists.

Carey scored 20 points for Duke, Jones had 17 points and Stanley finished with 14 points.

Duke: The Blue Devils’ defense, ball control and free throws betrayed them. Clemson shot 56.6%, far better than anyone else against Duke this season. Duke also turned the ball over 15 times and made just 10 of 20 free throws.

Clemson: The obituaries of the Tigers’ season written after a 73-68 overtime loss to Miami were premature. Clemson has won three in a row, shooting at least 43% in each game. And beating North Carolina and Duke back-to-back is every ACC fan’s dream.

Duke: The Blue Devils host No. 11 Louisville on Saturday with first place in the ACC on the line.

PITTSBURGH (AP) — Pittsburgh forward Terrell Brown thought he had a game-tying tip-in with 21 seconds to play, but he was called for a foul on the play, allowing No. 11 Louisville to escape Pitt’s upset bid with a 72-68 overtime victory.

Pitt guard Trey McGowens’ driving layup attempt bounced off the rim, and Brown put it back, appearing to tie the game, but he was whistled for an over-the-back foul against Louisville’s Malik Williams.

Williams hit both free throws to put Louisville up by two possessions, securing the final margin of victory.

, which tied for his second-smallest output of the season.

Dwayne Sutton, who finished with 13 points and nine rebounds, and David Johnson, who scored 11, picked up the slack for Louisville.

Pitt led for over 33 minutes, but never by more than nine points. The entire second half was a back and forth affair, with the Cardinals gradually closing the gap. Louisville tied the game at 61 with under a minute remaining on a Johnson free throw.

McGowens led an unexpected offensive charge from Pitt, which shot 48% from the floor in the first half. He finished 8 of 22 for 24 points. Xavier Johnson added 11 points and five assists.