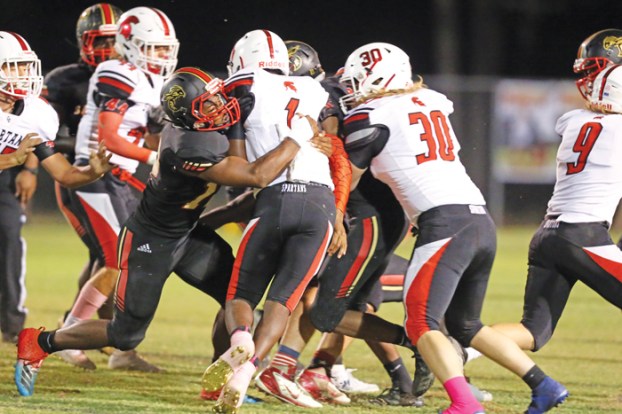 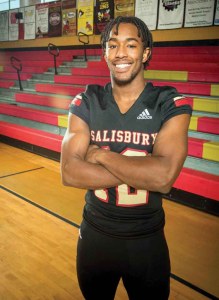 SALISBURY — The message was clear from the start: if you can’t stand the heat, stay out of Jabril Norman’s kitchen.

Salisbury’s in-your-face middle linebacker was the whole package in 2019 — and he routinely scattered its contents throughout opposing backfields. Menacing quarterbacks, shucking aside pass blockers and blowing up screens and running plays was the formula Norman used. He anchored a havoc-raising defense that prevailed 13 times and surrendered 9.8 points-per-game. His reward arrives now — distinction as the Post’s All-Rowan County Defensive Player of the Year.

“I say this very, very humbly, but I’ve earned this,” said Norman, a 6-foot, 190-pound senior, who provided wall-to-wall excitement as the Hornets mapped a route to the 2AA state championship game. “It comes from having confidence in myself and my teammates. We all knew we could be better than we already were. It’s a mental thing, getting everyone together and believing you’re better than you think.”

Salisbury head coach Brian Hinson believed Norman and the “Official and Certified” defense he captained was one for the ages. It pitched five shutouts and yielded only 130.4 total yards-per-game in 11 regular-season tussles.

“Jabril was huge for our team and our defense,” Hinson said. “He helped turn the school’s program around, got us to the state championship game. He’s worked extrememely hard and deserves this. Now, it wasn’t just him, but if you take him off that defense, we don’t win as many games.”

They won a baker’s dozen, including post-season triumphs against Mount Pleasant, Washington, Hertford County and Randleman. It was Norman’s run-don’t-walk mentality that shoehorned the Hornets into a title match with Shelby, where their magic carpet ride was grounded on Dec. 14.

“He was the poster child for our defense,” said defensive coordinator Mike Herndon. “And he did everything in fifth gear. There was no first gear. Even doing drills in practice, we had to pull the reins back on him. He’d want to do everything full speed, wide open. That’s all he knows.”

Of course, you can’t tell an Indy 500 driver to keep it at 35. But Norman’s foot-speed and knack for finding the football were crucial to Salisbury’s success.

“He’s all about energy,” said sophomore teammate Jalon Walker. “He practiced 100 percent and played 120 percent. Anything that came his way, he stopped.”

When it came to thwarting an offense, Norman was one of the county’s most-gifted practitioners. He finished the season with 102 tackles and 53 assists, including 18 deflating tackles-for-loss. He forced six fumbles and recovered three.

“I took responsibility for every fail, for every first down and every yard we allowed,” he noted. “I tried to influence my teammates, to bring out the best in everybody. I knew our team and how we moved as one. If we gave up three yards, I’d be like, ‘No, that’s too much. We have to do better.'”

Salisbury may have been at its best on Dec. 6, when it silenced top-seeded and previously unbeaten Randleman in a 14-7, fourth-round playoff win. Norman played with his signature, cool assuredness as the host Tigers were limited to 78 total yards.

“That was an accomplishment,” he said, with a beaming smile. “When you first realize that you’re going to play for the state championship, that’s a pretty good feeling. The first few minutes after that game, I just sat there and stared, thinking I’m here and we’re going there.”

Eight days later, after the Hornets finished a noble second-best in the state, Hinson had a moment to reflect. He understood that winning is still a wonder and that high expectations are a prerequisite for high achievement.

“Our young men achieved something nobody thought they’d achieve,” the Post’s Coach of the Year said. “Whenever you’re playing in the last possible game of the year, you can’t be too upset. You can be disappointed, but not upset. There were a lot of teams that wished they could have been in our situation. Our kids were there.”

They were, led by the always-improving Norman. He’s got a 3.46 classroom GPA and hopes to play college football next autumn. A handful of programs — including Wingate, Catawba, Mars Hill, Fayetteville State, Elizabeth City State and Quincy University (Illinois) — have presented offers. Wherever he lands, Norman will bring a piece of 2019 with him.

“The love of the game and bonding with my teammates. That’s what I’ll always remember,” he said. “Yeah, we had our ups and downs, that’s football. But we were worthy. We loved each other and it showed.”

Williams out as Livingstone’s football coach