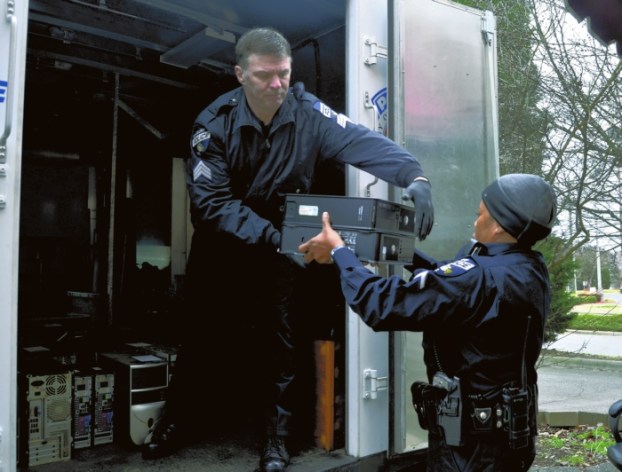 SALISBURY — Six days ago, Salisbury Police charged D’Andre Anthony Curry with armed robbery after a pile of money found at his home linked him to the robbery of a “fish arcade” business.

It’s one of the reasons that Rowan County Sheriff Kevin Auten sent letters to 22 businesses his agency says qualify as illegal gambling establishments. The businesses have until Jan. 20 to shut down or face arrest, seizure of equipment and profits. The fish arcade businesses, named that because of the types of games that are played, were determined after litigation in 2017 and subsequent appeals to violate the state’s sweepstakes law.

The court said there’s no doubt the games are sweepstakes. Because sweepstakes are conducted through an “entertaining display,” they violate General Statute 14-306.4. The court further said the games violate the law regardless of whether skill and dexterity or chance determines the outcome.

Deputy Chief David Ramsey said the Rowan County Sheriff’s Office intends to enforce the law prohibiting electronic sweepstakes machines and devices, because “recent court rulings are in favor of enforcement of the law.”

“We only recognize the state lottery and casino gambling such as on the Cherokee Indian Reservation,” Ramsey said.

He said a sheriff’s office investigation showed there are 14 such businesses in municipal jurisdictions — Salisbury, Granite Quarry, Landis, and Kannapolis — and eight outside municipal limits and within Rowan County.

“This action comes after multiple complaints from the public, law enforcement partners, and city and county planning and zoning officials about these illegal operations,” Ramsey said. “Multiple robberies have occurred of these gambling establishments, some of which have gone unreported to law enforcement. Complaints of drug dealing and other crimes have also been reported.”

The robbery that led to the arrest of Curry was one in which the incident was never reported to authorities. The officer was responding to a traffic stop when the driver informed him a robbery that had just occurred at the Fishmania Arcade on North Long Street.

But it is not the only robbery authorities have investigated at similar businesses.

The Fish Hut Arcade, located at 2164 Statesville Blvd., was robbed in August 2019. An armed suspect ran into the back of the business late at night as an employee was taking the trash out. The suspect stole a bank bag of money that was under a counter. In October 2018, the Fish Arcade Games, located at 2143 Statesville Blvd., between Little Caesars Pizza and Dairy Queen, was robbed by three armed men.

In July 2018, three men were arrested in the robbery of the Salisbury Biz Center fish arcade, 475 W. Jake Alexander Blvd., shortly after 2 a.m. The men were accused of holding an employee and customer at gunpoint.

In October 2019, the N.C. Court of Appeals upheld a lower court decision that the games were a violation of state sweepstakes law. The lawsuit came about after Southern Pines businessman Richard Frye, owner of gaming company Sandhills Amusements, sued the Onslow County Sheriff’s Office and the state in 2013 after the law enforcement agency began seizing gaming machines in that county.

Gift Surplus, the Arizona company that developed the gaming kiosks’ software, added features that gave users more control over the games’ outcome. A judge ruled in favor of Sandhill Amusements when the updates were deemed to be more about skill and dexterity than chance.

Throughout the last several years, the state legislature passed laws that banned the establishments, citing that they were considered a form of gambling. As laws changed, so did the way the games were played, evolving from “games of chance” to “games of skill.”

In 2006, North Carolina lawmakers passed a ban on video poker and all other electronic gambling. Sweepstakes games were introduced, which prompted a change in legislation that banned them in 2010. Two years later, the Supreme Court upheld the ban.

Then, fish arcade games grew increasingly popular in North Carolina. They allow players to put cash into a machine, shoot fish, netting the player points, which can be redeemed for cash or credits for continued play.