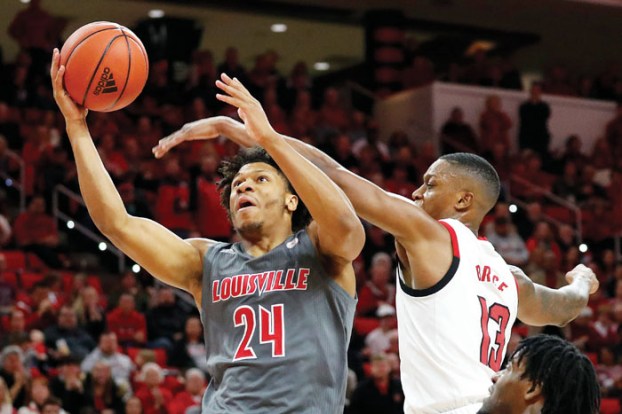 Louisville's Dwayne Sutton (24) drives the ball to the basket past North Carolina State's C.J. Bryce (13) during the second half of an NCAA college basketball game in Raleigh, N.C., Saturday, Feb. 1, 2020. (AP Photo/Karl B DeBlaker)

By AARON BEARD AP Basketball Writer
RALEIGH (AP) — Sixth-ranked Louisville turned in a mistake-filled start to Saturday’s game at North Carolina State, then had trouble protecting a comfortable second-half lead.
And yet, the Cardinals responded each time with the veteran composure that has fueled their perfect Atlantic Coast Conference road record, not to mention their best start in any league in nearly three decades.
Ryan McMahon made seven 3-pointers — six in the first half — and scored a season-high 23 points, and Louisville dominated the final 11 minutes to beat the Wolfpack 77-57.
Jordan Nwora added 14 points for the league-leading Cardinals (19-3, 10-1), who won their eighth straight game.
“We know no matter where we play, the other team’s going to go on a run,” Louisville coach Chris Mack said. “We just don’t have the type of kids that are going to splinter and sort of pull apart from one another.”
The Cardinals showed it, too.
Louisville got off to a horrid start by racking up 10 fouls and 10 turnovers by the midway point of the first half. But McMahon got things going by hitting his first six shots — all 3s — with four coming in a six-possession burst that helped the Cardinals negate all those early mistakes. They led 31-21 on the way to a 41-26 halftime margin.
Then, after the Wolfpack cut a 17-point deficit to four midway through the second half, the Cardinals responded by scoring 21 of the game’s final 26 points and holding N.C. State without a basket for the final 5:46.
Now Louisville has its best start in any league since going 10-1 in the Metro Conference in the 1992-93 season. The Cardinals are also 6-0 in ACC road games.
“We look at each other as road warriors,” said Fresh Kimble, who had 10 points.
C.J. Bryce scored 15 points for the Wolfpack (14-8, 5-6), but N.C. State shot 33% and made 5 of 23 3-pointers to lose for the third straight game.
“I like our grit,” Wolfpack coach Kevin Keatts said. “I like how we fought. I think there’s a lot of good things we can take away from this. Obviously, if we don’t score, it’s going to be tough on us.”
BIG PICTURE
Louisville: The Cardinals haven’t lost since falling at home to current No. 5 Florida State on Jan. 4. That run now includes five road wins, one at Duke’s famously hostile Cameron Indoor Stadium in the only regular-season meeting between two of the league’s top teams. And the Cardinals have had a different leading scorer for five straight games in a show of depth and balance.
N.C. State: It had been a frustrating week for the Wolfpack, who followed the program’s first win at Virginia since 2005 with a loss at Georgia Tech and Monday’s home loss to injury-depleted North Carolina. This loss cost the Wolfpack — ranked No. 57 in the NCAA’s NET rankings — a chance to earn a marquee win for the NCAA Tournament resume.
MCMAHON’S ROLL
McMahon, a 6-foot redshirt senior, had scored 21 points and hit five 3-pointers over the previous five games combined, which followed struggles in losses to rival Kentucky and FSU.
But he said he had a good feeling from the start by picking the ball that felt just right to be used in the game, a task which falls to the visiting team. McMahon didn’t miss until the final seconds of the first half and finished 8 for 12 from the field along with 7 for 10 from behind the arc.
“I went through and sifted through five or six balls and finally found one that was like really, really good,” McMahon said, adding: “Once I saw the first one drop, I was like, ‘All right, it’s time to go.'”
BRYCE’S PLAY
Bryce’s play was a welcome return to form after the Wolfpack’s one-time leading scorer had gone scoreless on 0-for-12 shooting during the previous two games.
“”I never lost any confidence in my game,” Bryce said. “Coming off of a slump, it was good for me to see the ball go in the hole.”
UP NEXT
Louisville hosts Wake Forest on Wednesday.
N.C. State visits Miami on Wednesday.
___
More AP college basketball: http://apnews.com/Collegebasketball and http://www.twitter.com/AP_Top25
___
Follow Aaron Beard on Twitter at http://www.twitter.com/aaronbeardap