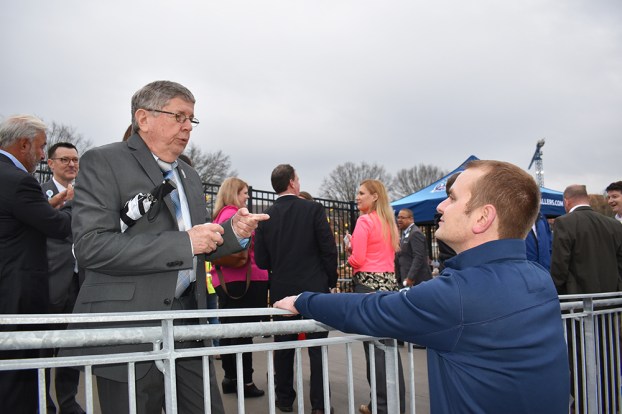 Quotes of the week: ‘Stand with the people’

— Matt Millward, general manager of the Kannapolis Cannon Ballers who was speaking Wednesday after the team unveiled the name of its ballpark

“What you will be doing tonight if you pass the resolution is putting yourselves on the record that you will stand with the people.”

— Rep. Larry Pittman, a Republican who represents the 83rd District and spoke Tuesday at a China Grove Town Council meeting where the board was considering a Second Amendment resolution

“All of Rowan needs to be united. This is our home, and it’s time we make it a place that everyone would be proud to live in.”

— Lee Withers, who is running as a Republican for county commissioner in the March 3 primary against incumbents Craig Pierce and Mike Caskey.

“You survive the best way you can, one day at a time.”

— Morris Phifer, who was among dozens of unsheltered people who ate lunch last week at Rowan Helping Ministries and participated in the Point in Time count.

“The officer’s actions likely saved the victim’s life by getting him to the ER quickly.”

— Jerry Stokes, who is the Salisbury Police chief and was speaking last week about an officer who drove an injured man to the hospital in his police cruiser after a shooting at Thelma’s

“If you knew who your charge nurse was going to be, would you teach that child differently? Would you do something to motivate their passion in a different way? Would rigor come to a different level than it is in your classroom?”

— Lynn Moody, who is the Rowan-Salisbury Schools superintendent and was speaking Wednesday during a State of the district speech.

The Salisbury City Council would do well to heed warnings from City Manager Lane Bailey that he’s discouraged about the... read more