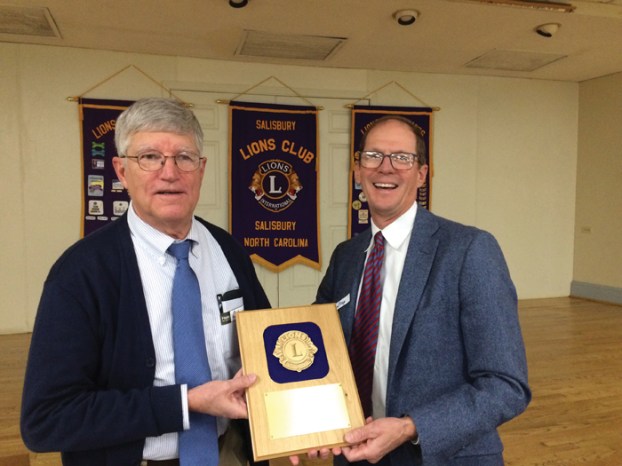 Emerson honored as Salisbury Lions Club Man of the Year

The Salisbury Lions Club hosted its 77th annual Lion/ Man/ Woman of the Year luncheon on Wednesday, Jan. 29 at The Harold B. Jarrett American Legion Hall. After a social period, lunch was served.
Many of the past Lions of the Year were in attendance as well as a number of Men/ Women of the Year past recipients. After the meal, it was time to introduce dignitaries and hear greetings from Lion’s Club President Mike Edwards.
Last year’s Lion of the Year, Rik Spencer, presented this year’s award to Jerry Austin. Mr. Austin has served in many offices in the Salisbury Lions Club and has previously been recognized as Lion of the Year (2003). Austin became a Lion in 1959 and subsequently moved to Salisbury in 1996. He is A Melvin Jones Fellow, a Jack Stickley Fellow, a William Wollard Partner in Service, a Sid Scruggs Beacon of Hope, a NC Lion’s Ambassador and is installed in the NC Lions Hall of Fame.
Greg Alcorn, last year’s Man of the Year, presented the Person of the Year award to Coleman Emerson. Mr. Emerson is a living embodiment of the Salisbury spirit of humility and service. For 22 years he has served Habitat For Humanity in many different positions, a career he considers to be a blessing and a calling. As executive director he oversaw the Habitat General Store and helped it grow from a small facility on East Innes Street to what is now known as the Re-Store, a 26,000 square-foot facility on S. Main Street.
During this time, Habitat For Humanity in Rowan has has constructed more than 133 homes largely due to Mr. Emerson’s leadership. Quick to point out that he didn’t do it all by himself, he said it took a massive effort by a great team. Thank you Mr. Emerson for making Salisbury a better place to live.
After the ceremony there was time for fellowship and laughter. Thanks to the Banquet Committee for their hard work in putting together this celebration and thanks to Jerry and Geneva Austin for supplying the flower arrangements on each table.
You Might Like

Albemarle native is a 2019 Sailor of the Year