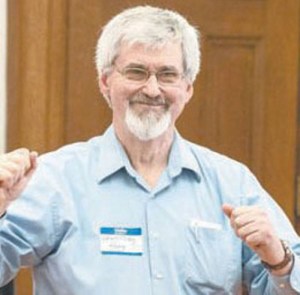 Though he has never held political office before, Hoy, 77, is familiar with campaigns. He has canvased in the county since 2010. Two years ago, he filled in for N.C. Senate candidate Arin Wilhelm, who was injured in a car accident before filing. Hoy stood in for several months until he was able to pass it on to Wilhelm after the primary.

Hoy, who is retired pastor, says he is the better candidate in this year’s race, because he has more experience in Rowan and Stanly counties. Hoy said e is not starting from scratch.

With help from his wife, Dottie, his motto is: “Hope, Opportunity, Yes!,” which makes an acronym of his last name.

Hoy said “hope” is for overcoming early life challenges such as his home burning down at age 9 and family separation. “Opportunity” is from taking advantage of what life has offered him.

Hoy is in favor of Medicaid expansion. He says everyone knows someone that has been overwhelmed with medical expenses.

Hoy said Medicaid expansion is paid by the federal government, and Gov. Roy Cooper is working with hospitals to cover the final portion. Expanding Medicaid “would cost the budget of North Carolina absolutely nothing.”

The previous year’s state budget still is not passed after Cooper vetoed it asking for Medicaid expansion to be included.

“I would hope to reach the goodwill of people who care about others to say ‘this is what we can do together’ just in terms of decision making to help all of our neighbors and friends,” Hoy said.

Hoy, who has a master’s degree from the University of Chicago Divinity School, has been attending the Rowan-Salisbury and Stanly County Board of Education meetings. Education has been a focus of Hoy for most of his life. He recently found a speech he wrote at age 13 about the importance of education.

“This is a lifelong concern and commitment,” Hoy said. “I didn’t come to it recently.”

He said the need for collaboration between educators and legislators is evident. In order to improve education, he wants “educators to be educators” and educators to have more of a say in improvements they need. Hoy is for funding pre-schools, restoring teacher assistants, providing support services for students in need and increasing funding and flexibility for school districts.

He said with job creation, leaders need to consider the ancillary things, like transportation and childcare.

“If you want a stable workforce that you can train and keep, let’s make the other things available to make that happen,” he said. “That’s just wisdom. That’s not a Republican idea or a Democrat idea.”

Hoy said there needs to be clear and frequent channels of communication with  municipal and county governments, especially during the budget process. He pointed at Rowan County legislators not adding funding in the General Assembly’s budget for the Empire Hotel project.

“I would hope to be an open and clear channel of communication working with friends committed to good government and serving all the people here,” Hoy said.

Hoy said having two primary candidates has forced Democrats to begin campaigning and talking about the issues now and not waiting until May or June.

On March 4, if he is not the primary winner, Hoy said he will support “our candidate” to take on Sen. Carl Ford, the Republican incumbent.

By Liz Moomey liz.moomey@salisburypost.com SALISBURY — Tarsha Ellis got her passion for politics at a young age. Her mother, Willie... read more