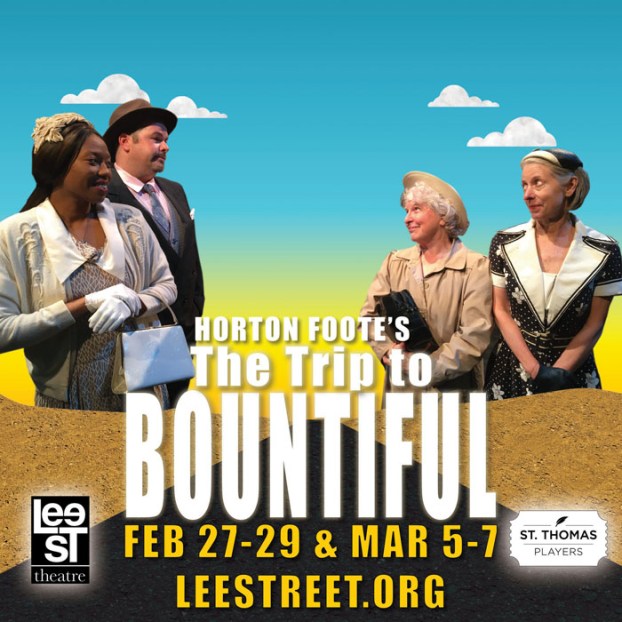 Lee Street Executive Director Rod Oden announced the new season for 2020-21 at Sponsor’s Night of the St. Thomas Players production of “The Trip to Bountiful.”

Performance nights will change to three consecutive weekends, Friday and Saturday nights, with the possibility of a Sunday matinee or Thursday performance based on ticket sales.

“Fences,” by August Wilson, will open in August.

“33 Variations,” by Moises Kaufman, featuring the music of Beethoven, opens in October.

A full story on the season is coming up.

Pack your tissues and exercise your funny bone for St. Thomas Players’ production of “The Trip to Bountiful.”

Linda Jones, as Carrie Watts, the woman who just wants to go home one more time, and Jennifer Hubbard, as her difficult daughter-in-law, steal the show. Jessie Mae is a real, well, we can’t use that word in this newspaper.

Chris Eller is sympathetic as Ludie, Carrie’s loving son, but the poor guy is no match for his nagging wife. Eller always puts his heart into a part, and he does a good job of first toeing the line, then stepping over it.

Jones is endlessly on stage, running here and there, fretting, having sinking spells, getting scolded by Jessie Mae. She makes Carrie a woman who is both feisty and sympathetic. The audience is going to turn their hearts over to her immediately.

Hubbard, an author and playwright, is also a versatile actress. She has played pitiful, strong, sweet, and this time, she is a whining, persnickety, demanding housewife who is constantly annoyed by her mother-in-law.

“Don’t be hummin’ those hymns,” Jessie Mae says. “Don’t run in the house,” she says.

The result is Jessie Mae becomes a comical character, some relief from what is a rather sad story.

Carrie is stuck in Houston, living with her son and his wife. She doesn’t get out much, and everything she does annoys her daughter-in-law. Ludie has a job that doesn’t pay enough for them to have more than a small apartment.

Jessie Mae wants to spend her days down at the drugstore, sipping Coca-Colas and gossiping with her friend. She wants to read movie magazines and go dancing. She wants new dresses. She wants children, too, but that never happened.

Carrie likes to stay up and look out the window at the moon, to tell stories about her childhood in Bountiful, near the Gulf Coast. Her very presence annoys Jessie Mae. Her dreaminess and nostalgia drive her crazy. Jessie Mae does not like to think about the past. Too depressing, she says.

Carrie is no dummy, nor is she senile in any way. She makes up her mind that she will go back to Bountiful on her own, since Ludie and Jessie Mae won’t take her on the three-hour drive. They have no car.

She’s made it to the train station several times before Ludie drags her back to her unpleasant reality. Jessie Mae demands Carrie turn over her government check every month to help with expenses, so Carrie has taken to hiding it, hoping she can cash it and get a bus to Bountiful.

And one day, Carrie does manage it.

It’s been 20 years since she was last there; Bountiful is no longer even a dot on a map. But she remembers big farms and friendly people, the love of her parents and the children she lost and had to bury there.

Thanks to the kindness of Thelma, a woman she meets at the bus station, all is not lost. Thelma, played by Jess Johnson with emotion and strength, figures out what’s going on pretty quickly, and decides she’ll help Carrie escape, then let Ludie know once they get to Bountiful.

Moments between Jones and Johnson are tender and heartwarming. Johnson is developing an impressive body of work on the local stage.

Things don’t work out as hoped, of course, but a crusty bus station worker, Roy, played with all of Bob Paolino’s many skills, and a kindly sheriff, brought to life by Kurt Corriher, come to see what Carrie needs.

Does it all work out? Is it a happy ending? It’s the right ending — Ludie grows up in a very short time, and Jessie Mae, being Jessie Mae, remains demanding, but seems less of a lightning rod. Carrie finds what she’s looking for, in the briefest moments. That’s when you might need your tissues. Or, like the sponsor night audience, there’s a collective “awwww” followed by wild applause for this lovely cast.

Horton Foote is the playwright, and he finds the true and complex emotions of family relationships. Director Claudia Galup is a pro at plays like this; she, too, feels the emotion.

This is a wonderful play to share with children and parents. It runs about two hours, with one 15-minute intermission.

The cast includes Steve Cobb as the ticket taker, and various members of the community as customers at the bus station.

Winter is not done yet. Today will be cold and windy, with a low in the 20s. It will be... read more