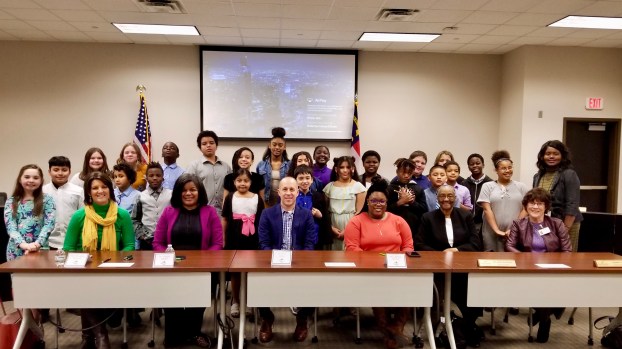 Carl Blankenship/Salisbury Post – Iesha Patterson's fifth grade class in the board room at the Wallace Educational Forum. The panel was made up of Meredith Williams, Angela Alford, Kevin Jones, Leanese Woods, Jean Kennedy and Susan Cox.

SALISBURY – Out of the 10 amendments in the Bill of Rights, which two would you cut?

A group of fifth graders on Thursday had to convince a panel of adults, including three members of the Rowan-Salisbury Board of Education, not to cut the amendment they were assigned to defend. The activity was created by North Rowan Elementary School fifth-grade teacher Iesha Patterson as a problem-based learning task. Students learned about the Bill of Rights and had to perform some research to create their arguments.

“They were trying to convince us that their’s should stay as part of the Bill of Rights,” said Board of Education Chair Kevin Jones.

Jones said he liked the presentation was at Wallace Educational Forum because it gave the students a different environment and the panel made the experience more professional.

North Rowan High School Principal Meredith Williams said the exercise embraced the idea all North area schools share — that their students can do work for the real world.

Not every amendment was as easy to defend as the others, and the Third and the Second amendments got the axe. The Third Amendment was created in reference to the British Quartering Acts that required colonial households to provide soldiers with food and shelter, something that has not been an issue in the U.S. since the end of the American Revolution.

In a debriefing after the presentations finished, Patterson explained to students that their amendment being eliminated did not reflect badly on them. The second amendment could have been presented to better show how it affected people.

Some other challenging amendments were the Ninth and 10th, which can be difficult to explain. Patterson said the First Amendment was a challenge as well because students had to talk about all of its points to the panel concisely.

While the kids were nervous, they overcame, she said.

Fifth grader Lucy Jones said students learned about each amendment one at a time, and that she enjoyed the project. Her favorite part was working in a group.

“We were all nervous, but the biggest problem was just getting everything in and making sure everything went smoothly,” Jones said.