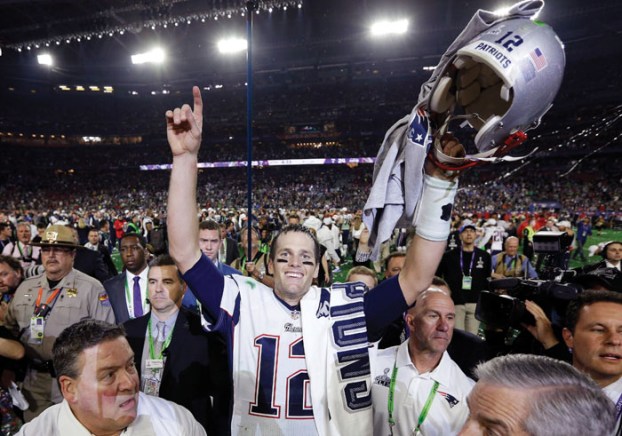 FILE - In this Feb. 1, 2015 file photo, New England Patriots quarterback Tom Brady (12) celebrates after the NFL Super Bowl XLIX football game against the Seattle Seahawks in Glendale, Ariz. Brady, the centerpiece of the New England Patriots’ championship dynasty over the past two decades, appears poised to leave the only football home he has ever had. The 42-year-old six-time Super Bowl winner posted Tuesday, March 17, 2020, on social media “my football journey will take place elsewhere.” The comments were the first to indicate the most-decorated player in NFL history would leave New England. (AP Photo/David J. Phillip, File) 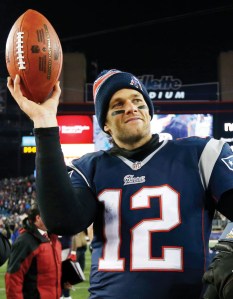 FILE – In this Jan. 10, 2015, file photo, New England Patriots quarterback Tom Brady holds up the game ball after an NFL divisional playoff football game against the Baltimore Ravens in Foxborough, Mass. Tom Brady is an NFL free agent for the first time in his career. The 42-year-old quarterback with six Super Bowl rings said Tuesday morning, March 17, 2020, that he is leaving the New England Patriots. (AP Photo/Elise Amendola, File)

It didn’t have to come to this, and for that both Bill Belichick and Tom Brady deserve some blame.

Patriots owner Robert Kraft does, too, but he’s been blamed for so many things that maybe we should give him a pass.

The greatest quarterback of our time — OK, make that all time — is parting with the team he led to six Super Bowl titles. That alone should make football fans sad, even if their Sundays were usually spent rooting against Brady and his curmudgeon coach.

But the NFL is a cold, hard place. There’s no room for a 42-year-old quarterback with declining skills and the huge contract he would want to stay in New England.

Turns out everyone is expendable. Even the GOAT.

We’ll never see No. 12 under center again for the Patriots. That was made starkly official Tuesday the way all big news seems to be announced these days — in a social media post from Brady that his “football journey will take place somewhere else.’’

And now the question is, what becomes of an aging quarterback who still thinks he has what it takes to lead a team to a Super Bowl?

Does Brady find the perfect fit and go out in grand style with another team like Peyton Manning did with his Super Bowl win with the Broncos four years ago?

Or is he a Joe Namath throwing wobblers in front of fans in Los Angeles who thought they were getting the quarterback who won the most significant Super Bowl years earlier?

History is not on Brady’s side. And Father Time certainly isn’t either.

The speculation is that Brady already has his sights on Tampa Bay, which should come as some consolation to Patriots fans who like to go south in the winter. The Bucs have a decent line, good receivers, and are in serious need of the kind of attention boost that adding Brady would bring.

There’s also Las Vegas, though the Raiders will make a big enough splash in their new home in Sin City without adding Brady to the mix.

In a world that’s suddenly uncertain, the one certainty is that there is a team desperate enough to sign Brady for the kind of contract his fellow 40-something quarterback Drew Brees got Tuesday from the New Orleans Saints.

A cool $50 million for two years, a sum the Patriots weren’t willing to part with even if it would keep Brady in the fold until retirement.

Proof again that sentimentality has no place in the NFL. Everybody’s expendable, even the quarterback who began his pro career as a sixth-round pick and will end it as the best quarterback in the 100-year history of the league.

The NFL — along with other major sports — is a business, as we’re constantly reminded. Management is free to do as it wishes, and players like Brady who are eligible for free agency are free to do as they wish.

Still, imagine Derek Jeter hanging up the pinstripes and playing his final two seasons with the Marlins. Or Kobe Bryant testing the waters to see what other teams might offer after winning five NBA championships for the Los Angeles Lakers.

Some players are so identified with franchises that they’re almost as big as the franchise. Brady may still be wearing No. 12 while playing elsewhere, but No. 12 will always be the Patriots number, much as No. 7 was for Mickey Mantle and the Yankees

Brady’s announcement he is leaving New England was tied, of course, to the free agency period that begins this week. Teams need to make decisions now and they are, despite the fact sports everywhere have been shut down by the coronavirus and there’s no certainty the NFL will be playing in the fall.

That Brady can still play at a high level really isn’t debated. Give him enough protection, a good possession receiver and a deep threat, and he’ll complete enough passes to make any team competitive. His experience and leadership will also be a welcome addition to any locker room.

But aging players always think they have more left to give than they actually do. They remember the ease of which they did things in their prime and believe they can still do it — even if reality suggests otherwise.

It’s as hard for fans to digest, too. Fans in New England can be forgiven for thinking Brady will always be there to lead them from behind in the final minutes, just like he has pretty much one every time the season was on the line over the last 20 years.

In a perfect world, Brady would play one last season with the Patriots and then retire with all the pageantry and glory that should go to a player who made Kraft’s franchise way more valuable than it was when he arrived. In a perfect world the Brady’s tweet of “FOREVER A PATRIOT’’ would actually mean that instead of being just words of condolence to fans he is leaving.

But the world is not perfect. And, stunningly enough, Brady is no longer a Patriot.

For now, at least, football doesn’t seem the same.

Tim Dahlberg is a national sports columnist for The Associated Press. Write to him at tdahlberg@ap.org or http://twitter.com/timdahlberg