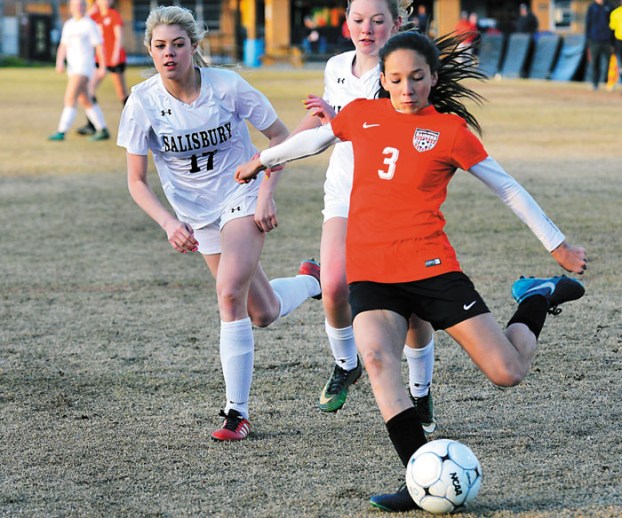 Wayne Hinshaw file photo/for the Salisbury Post ... South Rowan’s Madison Henry (3), right, moves ahead of Salisbury’s Olivia Dagenhart (17) during a game from 2018. Henry has decided to continue her education and soccer career at UNC Wilmington. 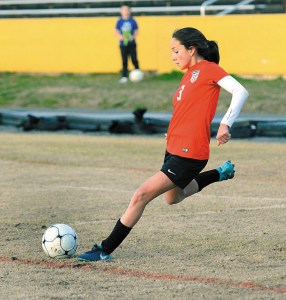 Wayne Hinshaw file/for the Salisbury Post …
South Rowan’s Madison Henry, shown during a soccer match in 2018, has signed to continute her education and playing career at UNC Wilmington.

College teams will get their chance this fall to contain her. Henry, a two-time All-State player, signed with UNC Wilmington. She’s one of six recruits, all in-state players, by the Seahawks.

Henry, a midfielder who produced a stunning, county-record 61-goal season as a sophomore in the spring of 2018 and has scored as many as seven goals in a single night, surged past 100 career goals and became the leading female goal-scorer in Rowan County history while she was still a junior. She’s always been quick, and she’s always been someone who could finish whenever opportunity knocked.

“You don’t score goals unless everyone on the team is working well together,” Henry said. “I’ve been fortunate to play with girls who were always looking for me, playing through-balls to me.”

Before the virus-induced hiatus for spring sports, Henry had turned her attention to running down the all-time scoring mark in Rowan County for either gender. That’s the 151 that Liberian Sappia Venn delivered for Salisbury’s boys program from 1991-94, including 54 his senior season.

Henry had started the 2020 season at a sensational pace. She scored six goals in South Rowan’s scrimmage with South Stanly.

Then she piled up 13 goals (plus two assists) as South, which was only 4-15 in 2019, roared to a 5-0 start in March with two victories in county match-ups and three more wins in the Central Carolina Conference.

“We’ve been using some new formations, and they’ve been working— they’ve given us a lot more scoring opportunities,” Henry said. “It’s been fun, some old girls and some new girls playing together. We’ve got some big-impact freshmen like Mackenzie Chabala that have made a difference for our team.”

Henry, as you might expect, got started on the pitch early. Her sister, Brittany Sprinkles, who played for South, was five years older.

“I was very lucky to have that older sister who played the game because it got me started when I was very young at the YMCA,” Henry said. “Soccer was the only game that ever really interested me. It helped me a that my family was into it, supporting me and pushing me. They helped me get better and helped make me the player I am now.”

She’s been a special player since she arrived in high school.  South was 5-15-3 the year before Henry helped elevate the program to 11-9-1  her freshman season. Then the Raiders won 17 times under former coach Kyle Neal and finished third in the CCC during Henry’s monumental sophomore season.

She’s on the small side (5-foot-5) but very fit. She’s proven that fitness with considerable cross country success. She didn’t compete on the trails as a senior, but she had a second and a third in county championship meets the previous two seasons.

She committed to UNC Wilmington, verbally, prior to her junior season.

“The players, the coaches, the atmosphere, that’s where everything felt right when I visited,” said Henry, who hopes for a career in the medical field. “They welcomed me. I knew it was where I wanted to play.”

Henry made things official with the Seahawks, signing a National Letter of Intent last  fall.

Fisher, who coached South’s boys to their first playoff berth since the 1990s last fall, took the reins of the girls team prior to this season.

“It’s been a pleasure to coach Madison,” Fisher said. “She’s not only pushing for all-time records, she’s been a great leader for us. She helps her teammates be the best version of themselves they can be. And she works defensively. She’s constantly working on both sides of the ball.”

All those who have coached her agree that Henry’s best trait is her persistence, that she just doesn’t stop, that she keeps moving for 80 minutes, whether’s she up three goals or down three.

COVID-19 has interrupted Henry’s goal-scoring feats, but she’s optimistic that this isn’t the end of her high school  journey.

“I’m going to try to keep practicing on my own,” Henry said. “There are things you can work on to get better every day.”

By Mike London mike.london@salisburypost.com MOUNT ULLA—  A defending state champion took on a team with championship aspirations. Throw in the... read more