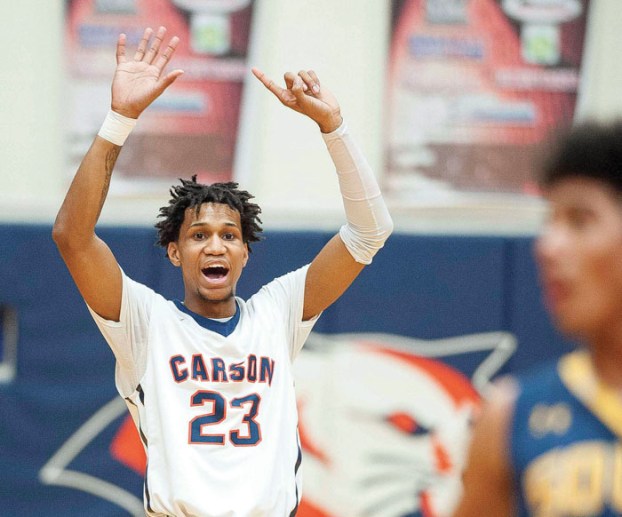 Jamarius Hairston, a 2018 Carson graduate, will have to decide which will be the right fit for him among eight four-year D-II schools. JON C. LAKEY / SALISBURY POST FILE PHOTO

SALISBURY — COVID-19 concerns wiped out his dream of competing for a national championship, but that was the only blemish on the masterful sophomore basketball season Jamarius Hairston turned in for Davidson County Community College.

Hairston, who graduated from Carson in 2018, was named the Region X Player of the Year for 2019-20, scoring 20.2 efficient points per game and leading the DCCC Storm to a stellar 31-1 season. That was the second-most wins in school history, and this is a program that’s been stout just about every season since it got started in 2007.

“DCCC moved up a level and played Division II for the first time last season and was kind of a middle-of-the-pack team (19-12),” Hairston said. “So that 31-1 is what I was most proud of this year. We had a season more like what Coach (Matt) Ridge was accustomed to having.”

The COVID-19 threat has delayed campus visits, so Hairston hasn’t made a decision yet as far as his next adventure.

He does have eight offers from four-year D-II schools in the South. He has an opportunity to play in the mountains (Lees-McRae), the eastern part of the state (Barton) or to play in his own backyard (Livingstone). There also are offers to consider from Young Harris (Georgia), Auburn-Montgomery (Alabama), UVa-Wise (Virginia), Bluefield State (West Virginia) and Claflin (South Carolina).

“I actually got two offers in one day, and that was a pretty amazing feeling.” Hairston said. “UVa-Wise has a beautiful gym and that would mean getting to play in the South Atlantic Conference. Young Harris also plays in a great conference, the Peach Belt. Going to Claflin would mean reuniting with (Carson teammate) Jailen Williams. We’ve talked about that. I’m blessed to have a lot of good options.

As a Carson senior in 2017-18, Hairston had another hoops season that was virtually flawless. He led a 26-3 team with 20.5 points and 7.0 rebounds per game. He was MVP of the Dale’s Sporting Goods Sam Moir Christmas Classic, county co-player of the year and all-region. He finished his career for coach Brian Perry as the No. 2 scorer in school history (behind Darius Moose) with 1,659 points.

The 6-foot-4 Hairston signed with D-II Lander, a Peach Belt school in Greenwood, S.C., but this freshman season was mostly adversity. He had a handful of good games, including flashy efforts against Livingstone and Young Harris, but mostly he sat  on the bench. The coach who recruited him resigned during the season. With Lander’s roster well-stocked at Hairston’s position, the newly installed coach agreed with Hairston that his best course of action would be to transfer.

DCCC welcomed Hairston as a one-year shot in the arm.

“Coach Ridge believed in me from the first day,” Hairston said. “He saw good things happening for me.”

Ridge believed in Hairston because he’d watched him play several times for the Carson Cougars and loved his game.

Ridge expected Hairston to make an impact, but no one could have predicted that he’d proved to be as dominant as he was. He nearly led DCCC to an undefeated season . The lone setback came in overtime in January.

Hairston’s 20.2 points per game came on 49.4-percent shooting and came with a great mix of inside and outside. He was one of the top 3-point shooters in the region (40.2 percent) and one of the most frequent visitors to the foul line in the region. Once he got to the line, he shot 81.9 percent, one of the best percentages in the region.

He turned in a parade of all-round performances for the high-scoring Storm. Besides all those points, he averaged 5.8 rebounds, 2.2 assists and 1.8 steals. He scored 39 points in a game in mid-February, made as many as six 3-pointers in a game, and had highs of 10 rebounds and seven assists.

“In high school, I was the biggest player we had, so I played inside a lot, but I’m a true wing player now,” Hairston said. ” I’m a better ball-hander than I was in high school. And I’ve worked on my jump shot on my own every single day. I’m shooting the ball better than I ever have. That 3-point percentage speaks to the work I’ve put in.”

One thing that hasn’t changed with Hairston is that he has no issues academically. He had the basketball team’s highest GPA for his first semester at DCCC.

His mother, Shonda, principal at Knollwood Elementary, twice has been named Rowan County Principal of the Year, so education has always come before sports.

“I’ve always prided myself on what I do in the classroom at least as much as athletics,” Hairston said. “That won’t change, no matter where I am in the fall.”

DCCC was ranked third nationally, but the Storm was only seeded seventh for the 16-team national tournament that was supposed to have taken place in mid-March in Danville, Ill. The tournament was initially postponed until April by the COVID-19 situation. Eventually, it joined the long list of cancellations.

“We were excited about going up there and showcasing what we could do,” Hairston said. “Being seeded seventh after going 31-1 was kind of a slap in the face, so we were really ready. Then, in one day, it was all over. It hurt a l ot. It was hard when we found out we’d never get to play together again.”

The future, whenever basketball resumes, should be bright.

Hairston and his teammates are completing this semester with online classes, while he makes up his mind about his next destination.

“Wherever I go, it’s going to be my third school in three years,” Hairston said. “More than anything, I want to find a home.”