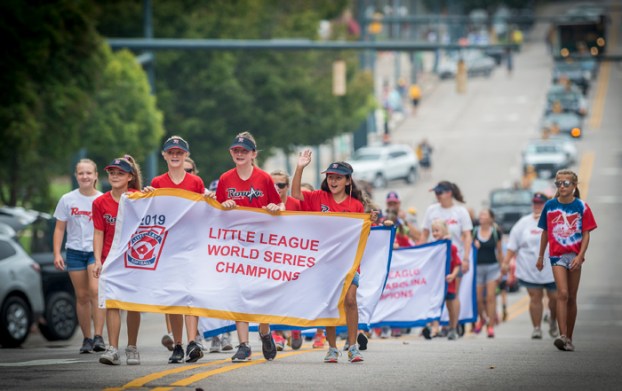 The Rowan County All-Stars celebrate their Little League World Series Championship with a parade downtown and a celebration at Salisbury Community Park on Saturday, August 17, 2019. 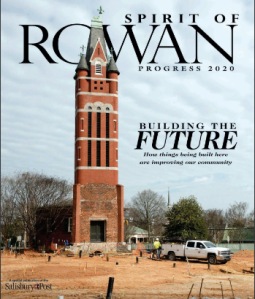 For the second time in five years, a Rowan County team in 2019 won the Little League Softball World Series.

Rowan’s team, girls ages 11 and 12, defeated Louisiana, 4-1, last Aug. 14, in Portland, Oregon. The team equaled the feat of the 2015 squad — becoming world champions. Add in the 2016 and 2017 teams which finished as national runner-up, Rowan has been to the World Series four times.

So, how did Rowan Little League build a softball dynasty here? It took time, effort and, according to league President Dan Wales, it certainly didn’t spring up overnight.

Rowan Little League has always offered baseball. It was open to girls, but most of the participants were boys. The Salisbury Parks and Recreation Department started a girls softball program in the early 2000s, and it was simply recreational. By 2009, the city asked Rowan Little League if it would like to take over the program, rather than having two programs in competition with each other.

“We gladly accepted the city’s softball program, but we took our lumps for several years,” said Wales. “The powerhouses from East Surry and North Wilkesboro were just phenomenal, like we are today. But when we made it to the regional in Clarksville (Tennessee) in 2014, when the 2015 girls were 10 years old, that kind of kick-started everything.”

One of the organization’s smartest moves, according to Wales, was encouraging girls who were involved in highly competitive “travel team” softball, to also sign up for Rowan Little League.

“Most of the strong players were involved in travel ball and we told them, ‘hey, you can play both,’” Wales recalled. “We’re a perfect example of what happens if the girls play both. We go to Clarksville in 2014 and won it, but we also learned from our competition in Tennessee that its program had started girls playing tee-ball when they were 4 years old.”

Fast-forward six years. Not only does Rowan Little League have two World Series championship banners; the program has experienced growth. It has leagues for 6U tee-ball, 8U coach-pitch, 10U player-pitch and 12U player-pitch — for both softball and baseball.

Wales and Jeff Bernhardt, current vice president of operations, have been the mainstays, but the growth, according to Wales, comes from the work of other key people.

“I can say all I want about Jeff and I organizing it, but people like Steve Yang, Jeff Link, Jimmy Roberts, Jimmy Greene, Elizabeth Clarke, just to name a few, believed in Little League,” Wales said.

Yang, a local dentist who coached three of the four World Series teams and both champions, has been in the program for 17 years, starting when sons Alex and John were playing baseball. Later, each of his daughters, Ellen and Ashley, were in the softball program. Ellen was on the 2015 title team, while Ashley played on last year’s championship squad.

“I can’t say enough about Steve Yang,” said Wales. “He keeps it all together. He’s been my VP of softball for the last seven years and makes sure that we do it right during the regular season. Steve made sure we didn’t have any stacked teams. He didn’t want the league to be unbalanced, which causes poor experiences for everyone involved — players, coaches and parents.”

What some casual fans may not realize is that the team that represents Rowan Little League in the postseason tournaments is actually an all-star squad. There are five teams in the league this year and practice has already started. Games originally were scheduled to start in late March and run through May. Then, the best 14 players from those teams, voted on by coaches and a league committee, will be selected for the squad that could end up in a World Series.

“That’s always the most difficult part of the process that we go through — trimming the roster down,” Yang said. “Not every girl who thinks she’s good enough to make the all-star team will be a part of the final squad. There’s a maximum of 14 girls selected. Every year, there’s always some worthy girls that aren’t part of the team.”

When the team is selected, practice begins. There’s a district tournament in late June. Then comes the state tournament in early July before the Southeast Regional in Warner Robins, Georgia. Regional champs advance to the World Series in early to mid-August.

Recent success and four trips to the World Series, have no doubt increased interest and participation for Rowan Little League. Some of the games are televised. Last year, the champs even enjoyed a trip to the White House and a meeting in the Oval Office with President Donald Trump.

“Winning brings talent to the league every year, so when you have a successful summer, especially winning the World Series, or even advancing to it, you have young girls in the community that watch and read about it and want to be a part of it,” Yang said. “So that brings people who’ve never been part of Rowan Little League in and you have girls who have developed within our league that you hope will continue to be a part of it, year after year.

“The success kinds of builds on itself, because girls and their families inquire how can they be a part of this great thing. I’m not sure about the word, ‘dynasty.’ I just see it as success and growth from that success.”

Yang said that he is likely finished coaching the age group 11-12 now that has won two world championships. Yang’s daughters have aged out and, since he’s not coaching in that league this year, it wouldn’t be fair to come in at the end of the season. But he remains on the Little League board and may coach a girls softball junior team (ages 13-17).

“It’s time to let someone else do it,” said Yang. “There are capable people and coaches in the program. I could help someone, but even that is hard to do with my girls playing at other places.”

Whoever coaches the all-star team this summer will not go back to Portland. The national Little League organization has moved the softball World Series to Greenville, North Carolina.

Wales said that Rowan Little League and the Salisbury Community Park put in a bid to host the World Series, but Greenville received the vote. It is hard to argue with the decision, he said, as Stallings Stadium “is even better than the one in Portland.” He added that Salisbury will again host the junior age-group regional again this summer.

By Mike London mike.london@salisburypost.com SALISBURY — COVID-19 concerns wiped out his dream of competing for a national championship, but that... read more