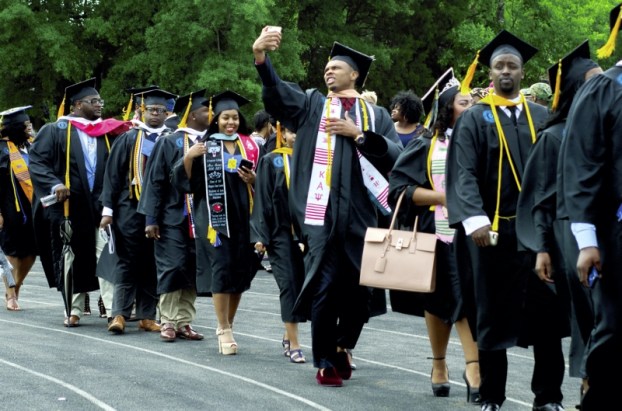 A Livingstone College Graduate takes a selfie as he walks out to the graduation on May 6, 2017 in Salisbury. KRISTI CRAVEN/ SALISBURY POST

SALISBURY — Livingstone College is responding to concerns from students about graduation requirements and remaining account balances.

The school’s response addressed concerns from several students who contacted the Post about an apparent graduation fee due on short notice despite there being no graduation ceremony taking place until December, student aid not being processed, not receiving housing refunds and the status of funding CARES Act funding receiving by the college.

The Post furnished a list of the claims to the Livingstone administration and the college responded by saying a message about a graduation fee was “inadvertently” sent to seniors and that there is no fee because there will not be a graduation ceremony this spring. Because of COVID-19, the college postponed its spring ceremony until December to coincide with its regular winter graduation ceremony.

There will be a fee if students want to take part in the December ceremony.

The college said it will receive $2.5 million from the CARES Act. But that funding has not yet come through and how that funding can be used is not decided.

The college said seniors who have completed all graduation requirements and have no account balance will receive refunds for room and board. The college said those checks are expected to go out next week.

Students claimed they were notified of a $100 graduation fee on Wednesday, with a due date on Friday afternoon. Payment of that fee would be required for them to graduate, student said. The several students also all said there were balances on their accounts, which must be cleared to graduate, due to financial aid packets not being processed.

A number of those seniors who contacted the Post also claimed they were told by the college’s Student Government Association they would receive 40% refunds for room and board costs after students were required to vacate the campus and move to distance learning due to COVID-19. SGA President Anthony Bowman did not return a request for comment.

A student spokesperson said the concerned group wanted to remain anonymous out of fear of retaliation by Livingstone College for speaking out and just wanted answers from the college.

One senior said students had asked for assistance with account balances multiple times. The same student said she saw fliers about waiving fees for incoming students around the same time students received the notice about graduation fees.

One student, a junior, described stress her friends felt by having balances on their accounts and not being able to graduate unless they receive the reimbursements to settle their accounts.

Another senior said students had not been able to get in touch with the college after sending multiple emails a day and questioned why the institution would request $100 for a graduation ceremony which had been postponed.

A statement from the college said the school understood frustrations of graduating seniors during “these unprecedented times when school operations are far from normal during this important milestone in their lives,”

“We have all had to pivot and navigate unchartered territories,” Livingstone College said. “We salute our seniors and wish them the best as they enter a new chapter in their lives, and we pray that all of our students remain safe as we enter summer break.”

May issue of Salisbury the Magazine is now available

SALISBURY — The May issue of Salisbury the Magazine, a publication of the Salisbury Post, has reached subscribers and is now... read more