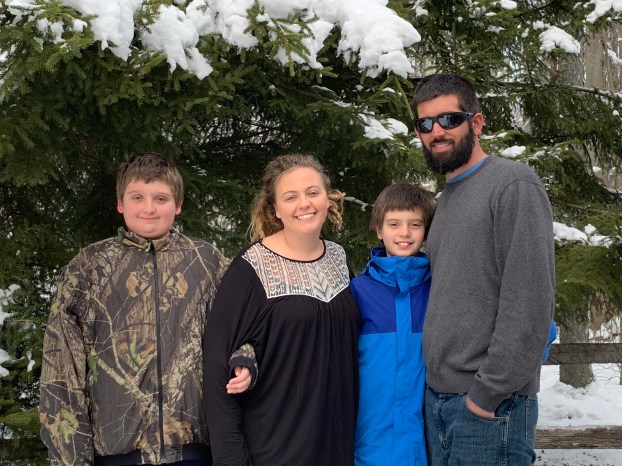 The Hawke family, left to right Mason, Courtneym Wyatt and Cayman, will be adopting two teenage girls from Colombia. The adoption has been stalled due to COVID-19.

SALISBURY — Courtney Hawke planned to be in Colombia on April 28, her birthday, with her husband and two sons finalizing the adoption of two teenage girls, but completing the adoption and returning all the United States has been delayed because of the COVID-19 pandemic.

Last summer, M and D (the adoption agency requested the names to be redacted) came to stay with the Hawke family. The adoption agency, Kidsave, concentrates on finding permanent homes for older children. The visit, called Summer Miracle program, was a trial period for the family and for M and D.

The agency’s goal is that the home family should “network them” to help them have the best opportunity for adoption when the foster kids or orphans visit.

Courtney already had the idea of adopting 15-year-old M and 13-year-old D. She was interested in older kids because they were a similar age to her sons. She also felt that all foster kids and orphans deserved an opportunity to have a family of their own.

“I wanted to help who I felt like had a lesser chance of getting assistance that every 15-year-old deserves that has been brought into the world — to have someone that loves them and guides them and teaches them,” she said.

Courtney and her husband, Cayman, talked about adoption around the time their second son was born.

“We knew we wanted a bigger family but didn’t need it to be by birth,” she said. “We wanted to be able to help some of the kids in the world that are already here.”

Courtney would frequently look over adoption websites, and a friend of hers had adopted from Kidsave. Courtney said she was initially interested in adopting a hearing-impaired boy because Cayman is deaf.

“In my head, I was prepared to adopt a boy who was also deaf,” she said. “I thought it would be a nice bonding thing for my husband and him.”

Then she saw saw M’s and D’s picture and read their bio. They both loved to swim like her sons — 13-year-old Mason and 11 year-old Wyatt, who are on a swim team. One was interest in learning how to play guitar and Wyatt plays guitar.

M and D came to the United States from June 27 to Aug. 1. Courtney admitted it was awkward at first. The Hawke family speaks only English and M and D only speak Spanish. They picked up the girls in Washington, D.C. and drove six hours back to Salisbury.

“It was out of everyone’s comfort zone,” Courtney said.

“It was the first sign of ‘wow it could work and not be awkward forever,’” Courtney said.

Together, the Hawke family celebrated M’s quinceañera (15th birthday) and D’s 13th birthday with a luau, though both of their birthdays were later.

After M and D returned to Colombia, the family submitted a letter of intent to adopt M and D, beginning the process of adoption. The goal was for the adoption to be finalized in April — when the family would travel to Colombia and return with M and D. But COVID-19 has changed so much of daily life and it delayed the adoption, too.

“That was a tough pill to swallow when I knew that we wouldn’t be,” Courtney said.

The Hawkes have been able to talk to M and D through Skype calls every two weeks, though the language barrier still exists. Hawke is learning Spanish through the program Duolingo and M and D are learning English.

Hawke said M and D know the family is still going to adopt them, but the exact date remains unclear.

“We don’t have answers to give them,” Hawke said. “Every time we talk they say we can’t wait for you to get here and get us and be in the United States as a family.”

If she knew ahead of time, Courtney said, the family would have gone to Colombia to quarantine to be with M and D.

“If we have to stay home here, we might as well stay home there,” she said.

Courtney said she has been through many emotions, including being frustrated and sad, but she’s starting to see the light at the end of the tunnel.