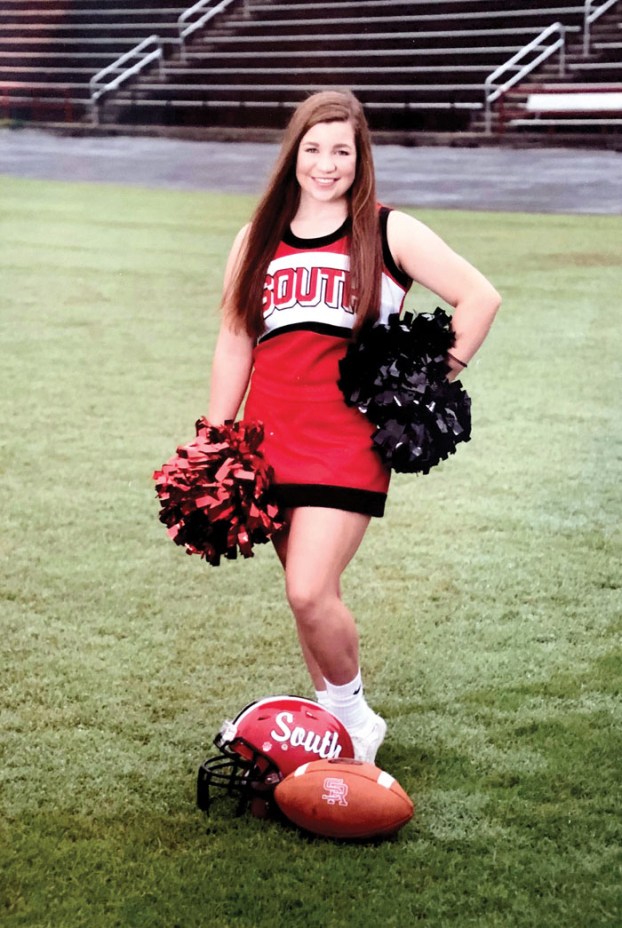 LANDIS — No one wants the high school all-star games in Greensboro to take place as scheduled any more than South Rowan’s Carleigh Tadlock.

Tadlock is a cheerleader, officially an All-State cheerleader. She’s one of 30 elite girls picked to perform during the East-West All-Star football and basketball games.

The girls and boys basketball games scheduled for Monday, July 20, are usually the best showcase for the cheerleaders. They’re usually introduced individually and they’ll also perform a complex halftime routine.

That will mean getting up early for several days and some late-night practices, but that’s why they’re All-State.

“They’ll learn a full routine in a weekend,” South cheerleading coach Kresen Whitmarsh explained. “They’ll have two and a half days to learn it, and then they’ll perform it.”

Sounds like a lot of pressure — and it is.

She has many interests and excels at a lot of different things. She rides horses, plays piano, sings in show choirs.

In the classroom, she takes the tougher AP courses.

Tadlock figured out a number of years ago that cheerleading was what she liked best of all. She probably could have scored some goals or made some 3-pointers, but she decided early on that cheerleading was going to be her sport in high school. And cheerleading, if you put heart and soul into it the way Tadlock has, is a full-time commitment.

“When I was in middle school, I found out that you could make All-State in cheerleading, and I set that as a goal,” said Tadlock, who runs almost every day. “I never stopped working for that goal.”

Tadlock has put in the time, not only cheering for South Rowan teams, but competing outside the school setting with Salisbury’s Elevation Cheer. Elevation Cheer has raised her skill level, while increasing her appreciation for her sport.

The NCHSAA holds a massive competition in December. South Rowan finished second in its division at that one. It was held in Raleigh.

South has a ton of tradition in cheerleading and won NCHSAA championships as recently as 2017 and 2018.

“We’re always in the top three in the state in our division,” Whitmarsh said.

At least as important as the NCHSAA event is the North Carolina Cheerleading Coaches Association State Championship that was held in Apex on the first day of February. South also took a second-place finish in Apex.

“It’s all really very stressful,” said Whitmarsh, who was a cheerleader at West Rowan during her high school days. “There’s so much practice. You spend months doing reps and building skills, and then you’ve got two minutes and 30 seconds to perform for the judges. That’s it. It’s usually really good or really bad. Cheerleaders don’t have the luxury of going in at halftime and trying to fix all the things that went wrong like some other sports. If you mess up in cheerleading, you just mess up.”

Prior to the NCCCA competition, Whitmarsh submitted names for all-region consideration, along with an application, headshot and performance video.

Then the all-region picks reported the following day to Southern Alamance High to perform for judges who would choose the All-State team.

Tadlock made the team.

Part of it was her versatility. Whitmarsh explained that she is adept at two positions.

There are four “positions” in cheerleading. The most glamorous ones are the flyers, who are on top for the stunts. Then there are “main base” and “secondary (or side) base.” The main bases are strong and hold the flyers. The secondary bases help lift the flyers. The “back spots” stand behind the stunt and can help stabilize a stunt.

Besides having versatility and excellent technique, Tadlock has another advantage. Her personality shines through in a judging situation.

“She’s been on stage a very long time, so she feels the excitement, but not the pressure,” Whitmarsh said. “Her passion for cheerleading comes through and she looks very confident on stage. Judging cheerleaders is a subjective thing, so confidence is a very big factor.”

The cheerleading season is the longest of any sport. Tryouts for the team are held in May. The season lasts through March.

That’s a lot of months, a lot of hours and a lot of sweat. Competitions require travel and additional time commitments.

South had been gearing up for its last major competition of the school year — nationals in Myrtle Beach — when the cheerleaders’ season was brought to a sudden stop by coronavirus concerns.

“We’d really been working hard in preparation for nationals,” Tadlock said. “We tied for first last year and we really wanted to win it all this time. We were only about a week away from going when everything shut down. We didn’t get our chance.”

As disappointing as that was, Tadlock now has the East-West games as her motivation to keep running, to keep working, to keep hoping, to keep cheering.

The All-State team is made up of  girls who were picked as juniors and are now rising seniors. The All-state team also includes A.L. Brown’s Cayla Artis.